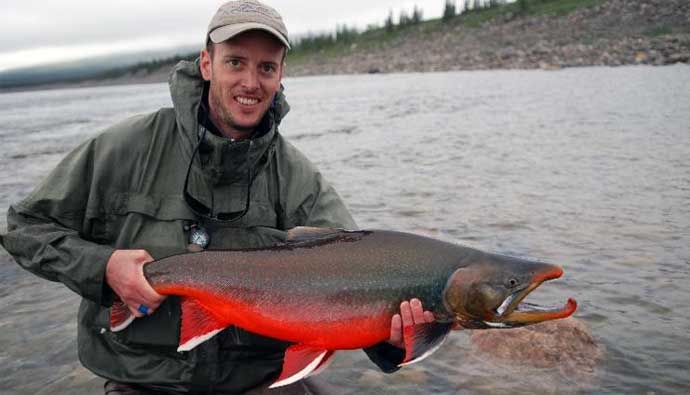 If you love catching salmon and trout, then you need need to try catching arctic char.

This fish is closely related to those two. If you were to keep a few that you catch you’ll notice that the fillets have the same look as salmon.

The light pink to deep red color and similar skin tone often has it confused with salmon. If you had to categorize the flavor, it’d be between what a salmon and trout tastes like, which means it’s good for a while variety of recipes. It’s a favorite fish among anglers.

It likes cold water and they are popular targets up in Iceland and Canada. If you’re going ice fishing for rainbow trout, it’s not uncommon for you to take a few char during your outing.

Now that you’re amped to catch one, let’s dive into how you can do it.

Arctic char or Arctic charr is a cold-water fish that can be found in arctic, subarctic, and alpine lakes. Considered to be the rarest fish species in Ireland and Britain, this species can be found in deep and cold glacial lakes and it is common in Nordic countries.

Polymorphism is common in Arctic charr and often occur in the same lake.

This freshwater fish is often confused for lake trout because it looks quite similar to it but it has light spots (the color varies from white, pink, or even bright red) rather than black spots and it has a boat-shaped bone or vomer that has teeth in the front.

It’s part of the trout as well as the salmon family but it has smaller scales in comparison. Plus, its skin is silvery and dappled with pink along the lateral line.

At the moment, climate change, invasive species, over-harvesting, and habitat degradation are a potential threat to these fish. Little is known about the life history of Arctic char in Alaska lakes.

Arctic charr can either be landlocked, anadromous, or semi-anadromous depending on its location. The arctic charr fish is native to the subarctic and arctic coasts and lakes that can be found high up in freshwater sources.

However, during the summer, you can find arctic char migrating to the sea where it spends time in intertidal and coastal areas, and after the season ends it migrates back to brackish water and estuaries.

The best places to fish for Salmon are the west coast of Canada, Alaska, and the Great Lakes. You’ll also find several population of char in New England.

How to Catch Arctic Charr

Arctic char fishing can go easier if you have the right gear and know where you can find the fish. Head out to cold rivers and deep glacial pools for a good haul. By nature, the fish is quite aggressive and strong but they can be targeted by sight especially if you are fishing early in the day when the char is hunting for midges close to the surface.

The fish is an opportunistic feeder and consumes up to 30 different species of both vertebrates and invertebrates. This includes mollusks, small fish, crustaceans, and even its own kind all of which can be used as live bait. However, the majority of char are caught on drifted egg patterns or streamers which should be as garish in color as possible.

Farmed char can be consumed across the year and is cultivated mostly in Iceland. However, there are only 2 seasons in the year when the wild arctic char can be found and both only last 2 to 3 weeks. The first is the spring run which spans from July to August and the second occurs in the fall between August and September.

You can follow the same method of filleting a trout when preparing char fillets. 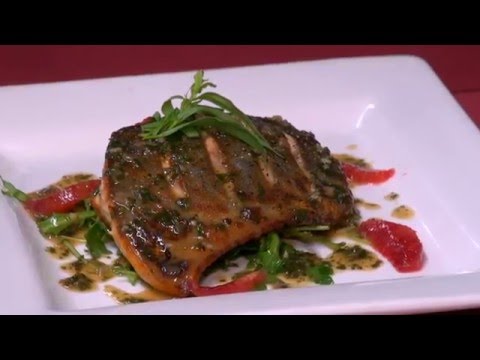 There are many arctic char related recipes for you to try, but this one is simple for cooking and is consistently delicious for the home chef. People say arctic char tastes like a mix between trout and salmon.

What do arctic fish eat?

Most arctic fish feed on zooplankton, krill algae, and other aquatic invertebrates. These fish can also start feeding on their kind when food supplies run short.

Arctic char is nutrient-rich and an excellent source of Omega-3 fatty acids which are good for the heart.

Why is arctic char farming so famous?

Farm raised fish is available year-round compared to the wild variety which can only be caught twice a year. It also has a milder and salmon-like flavor which is favored by seafood connoisseurs.

Arctic char may look incredibly similar to salmon but you can rarely catch it using salmon fishing techniques. They will take a wide variety of spoons, spinners, streamers, and even the dry fly.

Catching them on the fly is fun when you have access to running water, otherwise going after them through the ice is another great method. Just make sure you have the right ice auger to get you through that thick ice and use bright colorful spoons to get their attention.

If those two methods aren’t for you, then try trolling. You’ll find them in both the deeper areas and in the shallows.

Don’t forget to keep a few for the dinner table!