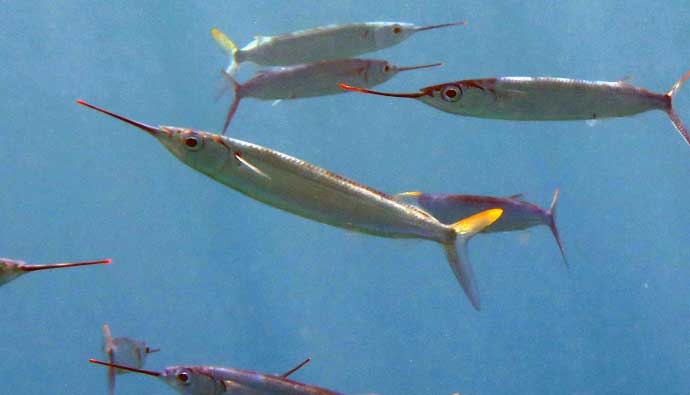 If you want to catch big surf fish such as tuna and swordfish, you need live bait, which doesn’t get any better than ballyhoo fish. This fish is often used as a cut bait and for trolling by saltwater anglers. It sports a halfbeak for a snout and has three stripes that extend all over its greenish back.

The belly and the sides of the fish are silver, and the caudal fin is a vibrant orange or yellow. The vibrant coloration and highly reflective skin are just some reasons why the ballyhoo is considered a prime baitfish.

How to Rig a Ballyhoo

Tips for Using Ballyhoo as Bait

What You Can Catch

A: Ballyhoo is excellent for fishing large game fish and can be used dead or alive.

Q: What is the difference between green and red ballyhoo?

A: Green ballyhoo is the heartiest of the species, but red ones don’t last long in the water. If you want to hook large game fish, go for the former.

Q: What do ballyhoo eat?

A: Before rigging ballyhoo, you have to catch them first, especially if you don’t plan on buying the frozen variety. Lure them with chum that is filled with their favorite food such as smaller fish, seagrass, copepods, and decapods.

Q: What benefit does the egg sinker offer?

Q: Why should I use a circle hook for this rig?

A: Circle hooks prevent gut hooking. That’s because the design creates a small gap between the hook point and the hook shank. A circle hook is also explicitly designed to wedge into the jaw wedge to increase the chances of a mouth hookup.