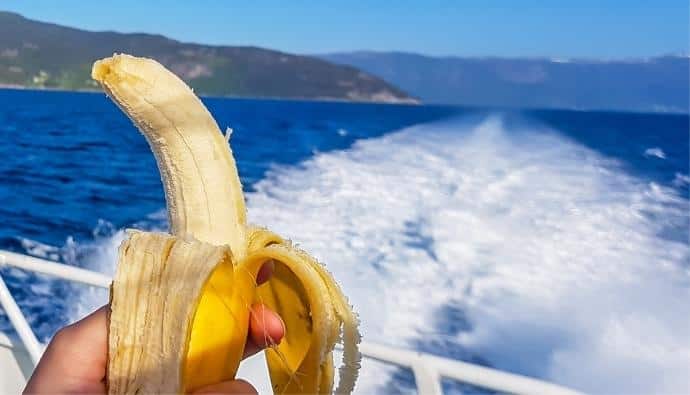 As a fisherman or boater, there is a high chance that you have been advised to avoid taking bananas on your boat. The reason given for this advice is usually that bananas are bad luck. This information is sure to leave you confused and curious.

Bananas are banned on boats because of old superstitions. When boats wrecked, bananas would be seen floating leading people to think they caused bad luck. Prior to ice coolers and refrigeration, bananas on long journies would spoil leading to foul smells and a lack of food. Today if you bring a banana on a boat you can rest assured nothing will happen outside of captains and fishermen giving you a hard time.

In this article, we will discuss everything that you need to know about bananas and fishing.

Why Are Bananas Not Allowed on Boats?

The reason why bananas are not allowed on boats is due to some of their properties. These properties affect fishing negatively, thereby marking bananas as forbidden fruit.

If you ask most people to give a reason why bananas are not allowed on boats, the answer will be “bananas are bad luck.” This is a simplistic answer, as there is a lot more to it.

Bananas are believed to cause mechanical problems for the boats, bad weather, and reduced quality of the catch.

Fishermen can be a bit superstitious, and the myth surrounding bananas is all the evidence needed. The origin of this superstition regarding banana and fishing boats can be traced back to the 1700s.

This period marked the height of the Caribbean trade when trade ships transported exports to different parts of the world. Some of these exports included cocoa, rice, salt, and fruits like bananas. During this period, a number of events were linked to the presence of bananas on board a boat.

For one, when ships got wrecked back then, bananas were usually the only valuables found floating on the sea. While the actual reason for this is that banana has a lower density than water, it was believed back then that the fruit was a bad omen.

The short shelf-life of bananas also gave them a bad reputation during this period.

Bananas get spoilt quickly, and as such, ships transporting them to a far destination had to move fast. This prevented fishermen from fishing on boats that had bananas. In addition, the fishermen that tried to troll for fish hardly made any catch.

Crew members also got injured after slipping on banana peels. Fishermen were also known to deal with diarrhea after eating bananas, which prevented them from fishing.

The banana thing also has some root in Hawaii.

Hawaiian anglers always had bananas on their boat to serve as food on their fishing trip. However, often times than not, they were left with rotten bananas by the time they had traveled far out. This meant that they were left with no food. Additionally, some of these anglers did not make a big catch, leading them to believe that banana was the problem.

All of these factors contributed to the narrative that banana brings bad luck, as rumors were spread at the dock. This is why bananas are banned on boats today.

In some cases, this ban extends beyond the fruit to items that are banana flavored or related. This includes banana boat sunscreens, banana bread, banana muffins, banana liquor, as well as runts.

Playing the song “Hollaback Girl” by Gwen Stefani is also banned on some boats. This is because an entire section of the song contains the word “bananas.” The next time you are going on board a fishing boat, it is essential that you avoid having any of these items on you.

Reasons Why Bananas May Be Bad Luck

We have discussed the superstitious origin of bananas as bad luck for fishing boats. In this section, we will discuss reasons why bananas may actually be bad luck for boats.

Spiders can be really harmful, particularly when they are venomous spiders. Sadly, they are known to be the major stowaways that hide in bananas.

Other harmful creatures that come with bananas include snakes and bugs. These creatures find their way onto boats by hiding in bananas and cause harm to unsuspecting sailors and crew members. Most times, they hide in dark areas of a ship to hatch and multiply, thereby creating an infestation problem on the watercraft.

In the early years, the presence of spiders on the boat left members of the boat crew dead after being bit. This is because they had no cure for bites while being days away from medical attention.

Today, spiders, insects, and snakes are still a problem associated with the presence of bananas on a boat. However, with the growth in medicine, effective cures for bites are readily available. Despite this, a lot of fishermen prefer to keep bananas off their boats in order to prevent bites altogether.

One of the major problems that sailors had with bananas in the old days was that they got spoilt quickly. This often left them with no food, especially when they kept bananas as food sources. During periods of storms and huge waves, they were left starving.

The reason why bananas got ripened quickly, is because they release a gas known as ethylene gas. Not only does this gas make bananas ripen, but it also causes other fruits to ripen faster than usual. Therefore, if care is not taken, a ship can be left with a cargo of spoiled fruits.

In this same vein, bananas affect the amount of time dedicated to fishing. Boats that carry bananas typically travel at high speeds in order to get to their destination before the fruit gets rotten. For these reasons, some fishermen simply opt against having bananas on their boats.

Banana peels can cause accidents on boats in the event that they cause crew members to slip. Boat fire is another problem that is associated with bananas.

We have explained how ethylene gas from bananas makes fruits ripen faster, but that is not the only problem.

When these fruits get spoilt, they start to ferment, producing alcohol. This alcohol which is produced results in fires if it is left to combust. If there is no coast guard, running water, or fire alarm system, the boat is highly likely to be engulfed in flames.

For this reason, fishermen are strongly against having bananas on their boats.

Bananas are suspected by many to be fish repellant due to their stickiness and scent. This problem is also linked to the ethylene gas that banana produces. It is believed that after eating the fruit, the banana oil that stays on your hand spooks the fish, causing them to run away.

As such, this will lead to reduced catch for the fishermen. This is one of the main reasons why bananas are still banned from boats today.

Banana flotsam is one factor that does not help the perception of bananas in any form. In the old days, when ships and boats were wrecked for a number of reasons, such as storms, fires, and uncharted reefs, bananas were one of the few ways of discovering them. This is because radios, coast guards, and radios were not in existence during that period.

Bananas, therefore, became marked as a sign of doom whenever they were found floating on the ocean. It can be explained that bananas float on water due to having a lower density than water. However, science was not so advanced at the time, and the myth spread unchecked.

The idea of bananas bringing bad luck on board a boat can be termed a superstitious belief. It is not everyone believes in superstitions, so you might be one to discredit this idea. However, it is clear that bananas might have some properties that pose a real danger to fishermen and their boats.

Spiders and snakes are animals that can release harmful venom into your body. Banana peels that are dropped carelessly can cause an accident on a boat. Also, the ethylene gas released by bananas affects other fruits and can result in boat fires in extreme cases.

Overall, it is best to be safe than sorry. Also, the banning of bananas is etched in the fishing culture, and it is nice to respect that. So on your next fishing trip, keep the bananas at home. In addition, make sure to avoid taking banana-flavored food along. Also, remember that playing “Hollaback Girl” and the Banana Republic wears are banned.

YouTube
Articles » Saltwater Fishing » Why Are Bananas on a Boat Banned?