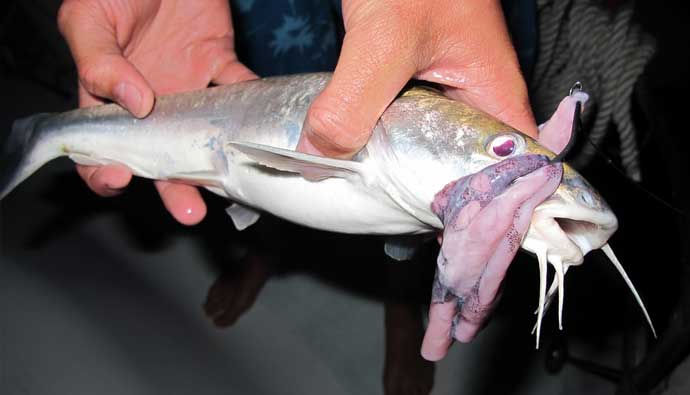 Catfish baits would seem like a pretty straight forward subject.

However, you would be surprised what makes the best catfish baits…some items are downright funky.

This is a type of fishing that does not require intricate catfish rigs and baits or special lures. In most cases, you already have good catfish bait in your refrigerator!

In this article, I am going to cover some of the top catfish baits, some of our personal favorites, and a bunch of catfish baits tips.

Grab your favorite catfish rod and reel and let’s get catfishing!

What Do Catfish Eat?

Catfish are known to be opportunistic feeders. While they do eat smaller fish and even turtles, they prefer meals that do not fight back.

Dead fish or animals that have fallen in the water and drowned are the perfect food source for catfish.

Old school anglers have often said, “catfish will eat anything that does not eat them first”.

These fish are typically lazy by nature and spend most of their time scavenging the bottom looking for a meal or backed into holes in the bank, waiting for a meal to come by.

Scavenging the bottoms of ponds, rivers, creeks, and lakes, it the reason catfish have come to be known as “bottom feeders”

This is a list that could go on and on because catfish will quite literally eat anything. We have included some of the more popular and easy to get baits in this article.

As we discussed earlier, catfish will feed on dead and rotting fish and animals and in most cases, go after that before a meal they have to work for.

Catfish stink baits come in a variety of textures and flavors. I’d throw this at the top of my weird catfish baits list.

Most often, stink baits are in a dough form that you can take out the amount you want to use, form it into a ball and put it on your hook.

Some of the more common complaints with catfish stink baits in dough form are “it slings off the hook when casting” or “it won’t stay on the hook.

The way we overcame this issue was to take a stocking and cut the toe out, put the stink bait dough ball in the stocking and put it on the hook. Worked like a charm especially on my trotlines!

We use it as we do most of our catfishing baits, with a bobber and set it close to the bottom. However, it works just as well to set it straight on the bottom. They will find it!

Tip: We freeze our chicken livers. This keeps them firm throughout the day of fishing and helps them stay on the hook better.

Who does not like a good hot dog? Catfish are certainly the same way. Hot dog weiners make an excellent catfish bait.

Cutting them into decent size chunks, putting them on a circle hook and letting them set will almost always produce results.

Beef weiners will work better because the skins are tougher and help them stay on the hook better.

The strong smell of the weiners will draw catfish and often, other fish as well. Not to mention the occasional turtle.

We all know cheese has a strong smell depending on the variety. This also makes a great catfish bait.

Because of the strong smell of cheese, this will instantly draw catfish in thinking it is a dead animal.

Cheese that comes in blocks is the best choice and holds together well in water. Cut off a decent size chunk, put it on your hook and wait. (You won’t be waiting long!)

Catfish dip baits are usually in a liquid or paste form. This is a bait you can simply “dip” any lure you are using in ad use as an attractant.

A good catfish dip bait should have a strong smell and stay on your lures for a while. Some of the cheaper brands simply dissolve when they hit the water.

The upside to using catfishing dip baits is, you do not have to carry baits along that can often become quite messy especially on a hot day.

Cut baits have long been a go-to for catfishing anglers. Catching a few smaller fish such as bream, and using pieces or the heads will often produce good results.

This is true with just about any form of baitfish that happens to be handy. You can use any part of the baitfish or if it is a smaller fish, whole. This is a great method for trotline fishing as well.

Be aware, this too is a certain turtle attractant as well. Often, if there are several turtles in the area you are fishing, they will steal the bait before a catfish sees it.

When Jon was fishing in Bangkok going after Giant Mekong Catfish, you know what his guides used to get the fish? Stale white bread dough balls.

Yup! His 120+ pound catfish was caught on a big bread dough ball.

Catfish aren’t picky eaters.  They are more like the vacuum cleaners of their homes.

Some anglers have developed their own brand of “secret catfishing baits”. Most have had proven results. I’ve even seen some catfish soap baits used from time to time.

Often these secret homemade catfishing baits will be comprised of the smelliest substances available. This is the truest way to attract catfish.

You can make your own secret catfishing bait if you want to get creative. Just remember to make it smell as bad as possible!

Q: What is the best catfishing bait?

A: Very simply, whatever smells the worst. Catfish are not picky eaters, and a strong smell will bring them right to your hook.

Q: Where can I get catfishing bait?

A: Any of the baits we mentioned in this article will last indefinitely if kept frozen. Dough baits often come in resealable containers and will also last a long time.

There are a lot of catfishing stink baits on the market that does deliver results. However, some of the best catfishing baits can be found in your grocery store.

I can remember as a kid fishing in Alabama, we did not have anything listed in this article available to use as fishing bait so we used plain loaf bread.

We caught enough catfish for a fish fry by using just stale loaf bread. It was hard to keep on the hook but it worked.

I hope you have found this article helpful and hopefully it has given you something you can use on your next fishing trip.

Jon Stenstrom
Founder
Did this article help you? Yes No
× Why not?

Scroll back to top

10 Fishing Tips You Should Know

Enter your email to get your copy