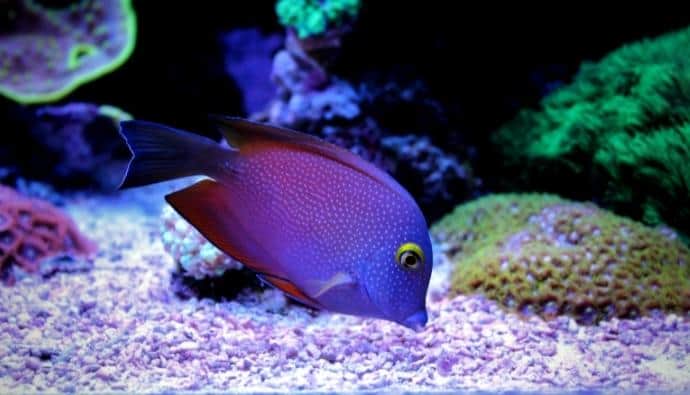 Hawaii is one of the best locations in the world to be in as a spearo. Anyone who’s ever put on a snorkel mask and skimmed along a populated reef knows the vast biodiversity present on all of the islands.

We’ve put together a list of five great targets to pick here on the Hawaiian islands, complete with bag limits, size limits, cooking ideas, and some expert tips to help you hit your target. These are all fish that are easily harvested with a pole spear.

5 Fish to Spearfish in Hawaii

The kole tang (Ctenochaetus strigosus, or yellow eyed tang) is a well known fish in Hawaii. Prized by beginner and veteran spearos alike, it’s an easy fish to harvest with great tasting meat.

Size limit: None (although for eating’s sake, aim for 5+ inchers)

Where to find: Coral heads and structure from 5-50 feet. Can be found deeper depending on island structure.

How to hunt: These fish are quite easy to hunt as they tend to stick to one area/structure, even with a spearo nearby. Dive down to the floor, use one hand to stabilize yourself on the reef if needed, and fire away.

Your only challenge with these fish is that they are schooling, so it’s easy to lose your target acquisition on the fish you want to hit – focus on the bright golden eye to keep your spear on target.

How to eat: Light cornstarch or flour dust with salt and pepper, and deep fried with the head and guts removed. Insanely good with some chili pepper water and furikake rice on the side.

A fish similar in taste and habitat to the kole tang, the manini (Acanthurus triostegus, or convict tang) is another great tasting pan fry fish. As another easy to harvest, delicious fish, the manini is a reliable catch for anyone looking to hunt.

Where to find: Similar depth and structure to kole.

How to hunt: Manini are similar in diet and behavior to kole (in that they are schooling fish), but slightly more transient. They’re found in the same habitats as kole, but you’ll also often see them in huge piles surrounding a coral head and feeding on it before moving onto the next.

Still, they’re a bit tamer than other fish on the list, and you’ll be able to land at least the first one quite easily by simply swimming down to the coral head they’re interested in.

Bear in mind that the commotion of landing a fish (or even just missing and firing your spear) will freak out the other fish in the pile, and you’ll have to be smooth and calm in your following drops in order to not spook them entirely.

How to eat: Same way as kole – maybe with a little bit of shoyu drizzled on top.

Affectionately described to me as the “Hawaiian chicken wing”, the paku’iku’i is one of the more underrated pan fry fish for the average spearo (though most Hawaiians know how good this fish really is).

It’s more agile and transient than the other fish, and it likes to stay in the surge zone – so you’ll have to slow down and choose the timing of your shot carefully. You’ll be rewarded with an incredible tasting fish.

Size limit: None (again, for eating’s sake, we recommend 5+ inches)

Where to find: Shallow reef, usually a bit shallower than where you’d find the majority of kole and manini. They’re most often spotted in surge zones (when there’s movement on surface structure like a rocky shore or <3 ft reef structure), so getting a steady shot can be a bit more difficult than the previous fish on the list.

How to hunt: As mentioned, the paku’iku’i are most often found in surge zones. As such, going straight into the surge zone can prove difficult for hunting, if not downright dangerous. I’ve found the most success putting my body and spear just below the surge area, and firing upwards into the bubbles.

Use one hand to stabilize yourself on some reef structure (most often an underwater cliff wall), and use the other hand to track a target for at least a second or two before firing in the surge. The worst time to fire is when the surge is reversing – hold off for another shot.

If you’re having trouble with visibility due to the surge, keep track of the orange spots on their rear quarters and aim slightly ahead of them to land a shot on the gill plate.

How to eat: Works just the same as the other pan fry fish. I also recommend putting some ginger and shoyu on this fish as the meat is a tad milder than the kole and manini.

4. Menpachi (and other red fish)

The humble menpachi (Holocentridae and subfamilies, or soldierfish and squirrelfish) is, bar none, one of the best eating fish in the Hawaiian islands.

Note: There are multiple variations of redfish, including alaihi, aholehole, and aweoweo. They were so prized by the ancient Hawaiian, in fact, that it was kapu, or forbidden, for a commoner to eat, and consumption was strictly limited to Hawaiian royalty.

Thankfully, no such limits exist today, and they’re easily harvestable if you know where to look.

Size limit: 5 inches for aholehole, none for other red fish.

Where to find: Caves, or just outside of caves during the daytime. Night divers may see them out and about in the darkness. Because they’re a popular catch, you’ll likely find larger ones in deeper water.

How to hunt: All species of red fish are particularly skittish at the sight of divers, especially menpachi. These fish can be found in caves during the day time, but if you find a hole full of them, that doesn’t always mean that they’ll stay there.

Many divers think that they’ve found a sweet spot to harvest multiple red fish, only to find that they’ve spooked off the remaining fish after landing one. Best practice: don’t get to eye level with the hole, rather try to approach it from an angle to hide your body.

When you do take your shot, do your best to minimize contact between your catch/spear tip and the walls of the cave.

The sound of the distressed fish struggling on a spear tip as well as the metal scraping along the cave walls will spook the other fish in the cave and cause them to relocate – either deeper into their cave structure, or another crevice that you won’t be able to reach.

How to eat: Like the other pan fry fish, this fish can be dusted with corn starch, salt, pepper, and whatever seasonings you like. However, I’m also partial to steaming this catch with ginger and lap cheong, and garnishing it with freshly chopped cilantro. Serve with, of course, rice.

Goatfish are some of the most plentiful and delicious edible fish on the reef. Again, there are a number of different species that you’ll find in the ocean, a list of which you can find at the Department of Land and Natural Resources website.

My preferred targets are moana kali, kumu, moano (also known as the Joe Lewis fish), and munu, in that order. These fish are suitable for hunting by pole spear as well as speargun.

Where to find: Goatfish can be found all along the reef, but primarily where they can detect crustaceans using their mouth whiskers. As such, look to land on rocky yet sandy bottoms near reef structure at depths from 10ft to 150ft.

How to hunt: Hide your body as best as you can at the bottom and utilize the aspetto technique. You can also draw in certain species of goatfish with a few quick grunts and dusting.

The vast majority of goatfish are curious and will come in close if you’re patient and wait for a good shot – make yourself as non-threatening as possible and try to use your peripheral vision to acquire your target in order to avoid making eye contact with your prey.

Some species such as moana kali and kumu are a bit harder to bring in; be patient and lean into your breath hold to get them curious enough to get in range.

Once they’re interested in you and come to check you out, goatfish will often do a few laps around you to figure out what you are – which is a perfect opportunity for a shot.

The same techniques apply for if you’re using a speargun vs a pole spear, but you may need to be a bit more patient and have a bit longer breath hold in order to bring in the fish to pole spear range.

How to eat: These fish are great baked, sauteed, deep fried, and steamed. I really love steamed goatfish stuffed with ginger, lap cheong, and garlic, drizzled with sweet shoyu. For extra flair, garnish with freshly chopped cilantro, and pour a layer of hot peanut oil to get a nice sizzle out of the fish. Serve with, of course, rice.

With so many fish to go after in Hawaii, it’s hard to figure out what to hunt let alone how to hunt it.

If you’re looking for more in depth recipes on how to cook your catch in Hawaii, I highly recommend going on YouTube and just searching “[Hawaiian fish name] catch and cook” for the best, most authentic local inspiration.

We hope that this is helpful to steer your research and get you shooting some solid fish to put on the table. Happy hunting!