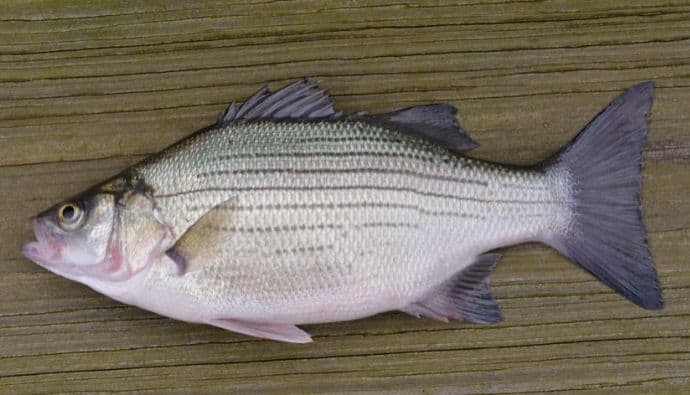 One of the top concerns when fishing for food is its taste. With a lot of fish species for consumption, it’s hard to tell which fish is the best-tasting because all have a unique taste. Your preference may just vary depending on what country you’re in.

Fish is a staple food. Everybody eats it unless one’s allergic to seafood. The fish type that you can catch would rely on your location and geographical conditions.

You can further enhance the taste of the fish depends on how you’re going to cook it. Since there’s a wide selection of fish that can be eaten, we’ve prepared a list of the best freshwater fish to eat and serve on the table.

As the name implies, this fish has a bluegill plate. This fish type is one of the go-to fishes that young anglers catch because it doesn’t get big that much, and its weight rarely reaches 1 pound.

Catching bluegills in clean and cool waters to have an enhanced sweet taste and tender meat. It has flaky, white meat that’s often filleted or fried.

The bluegill is the top choice for cooking among the sunfish family because it doesn’t have a fishy taste suitable for home or formal dinner.

It feeds on aquatic animals and insects only, so you can be sure that it doesn’t contain high levels of harmful pollutants.

Here’s how to cook bluegill.

This freshwater fish is a common catch whether you’re a novice angler. Similar to the bluegills, crappie has white meat and a sweet taste that’s soft to chew. It’s also has a bigger size that’s easy to clean and made into different kinds of recipes.

They used to be commercialized in the market for sale, but it can’t be avoided that some crappies come from unregulated water that’s contaminated. It’s best to catch them yourself to ensure that it’s clean.

Here’s how to clean and cook crappie.

If you’re from Asia, Europe, Africa, or North America, you would know that catfish is one of the freshwater fish that you can commonly see in the market. It comes in different kinds of species of various sizes.

It can be one of the healthy choices of fish because it’s low in calories and packed with vitamins and minerals such as omega-3 fatty acids and vitamin B12. It can be grilled, fried, baked, or broiled.

Its taste will depend on the time of year it’s caught. During the summer season, they used to stay in muddy ponds or rivers to avoid the heat; that’s why they tend to have a pronounced muddy taste.

It’s best to let it stay in tank water for a couple of days before cooking to avoid the muddy aftertaste.

The brook, brown, and rainbow trout ate the tastiest trout, especially if they come from indoor circulating tanks. These trouts have a pink or orange color.

It has an excellent amount of omega 3 fatty acid, B6, B12, Potassium, Thiamin, and Selenium. Since it has low levels of mercury, it can be served regularly.

The fresher the trout, the richer the taste is. However, it’s considered the bonniest fish. That’s why you need to take time to clean it up, but it’s worth it because it can be baked, smoked, broiled, and fried.

You would know that trout is fresh if it doesn’t have a fishy or ammonia-like odor.

Here’s how to fillet a trout.

Freshwater drum or sheepshead has a firm and meaty texture that favors those who don’t want a flaky texture. It only has a few pin bones that can be removed easily.

It can be fillet, grilled, smoked, baked, and fried. For a large size harvest, you can make fish stew or chowder.

Its flesh easily spoils, so you need to have a bucket with ice ready when you catch it. This is perfect for those who are into the keto diet because it’s carb-free and is enriched with healthy fats. Young freshwater drums tend to have a milder and sweeter taste.

Bass fish have white meat making it healthy that’s rich in protein. It has a fishy taste and smell, but when it’s cleaned and cooked properly, it can be minimized. Smallmouth bass has a more favorable flavor compared to largemouth bass.

According to experts, the bass flavor greatly depends on the water quality where it’s caught. If it’s from a clean and unpolluted body of water, expect that it has a sweet and fresh taste.

Due to its size, it can be filleted, but it can also be grilled, baked, or fried. Cooking bass sometimes needs to have a skilled hand.

You don’t want to eat an uncleaned or overcooked fish. This white meat compliments seasoning mixes and spices.

White bass has a strong fishy taste that may not be favorable to all. To get rid of it, it’s usually soaked in clean water for a few hours and cleaning it properly before cooking.

Another hack to get rid of the fishy taste is to soak it in water with a baking soda mixture.

It’s considered an oily fish that has a sweet and buttery taste. There are two types of white bass meat: the white meat on the belly, tail, and back, and the red meat in the inner rib meat.

This is a common freshwater fish that you can regularly see in the market. Aside from being one of the best tasting freshwater fish, it’s a favorite oily fish because it’s rich in vitamins and minerals.

It’s enriched with omega-three fatty acids, Vitamin D, and high protein. It comes in orange, red or white meat. It has a soft texture that even the kids will enjoy.

One of the trendy ways on how to prepare salmon is by eating it raw. However, it may contain impurities like bacteria and parasites if it’s not prepared properly.

It’s best to eat it raw if it’s newly caught. Other ways of preparing it include stewing, frying, and grilling.

Some say that walleye tastes like chicken of the sea. This freshwater fish is popular among many for its delicate flavor. Its pinkish white flesh is firm, yet tender and flaky. Walleye meat is a versatile ingredient that can be used in a number of dishes.

Listen to more cooking tips on the Cast & Spear Podcast

If you would go to different places, they may have their own version of the best tasting freshwater fish to eat.

In choosing a fish to catch for consumption, it’s important to focus on how it would taste and make sure that it also has nutritional benefits to nourish the body.