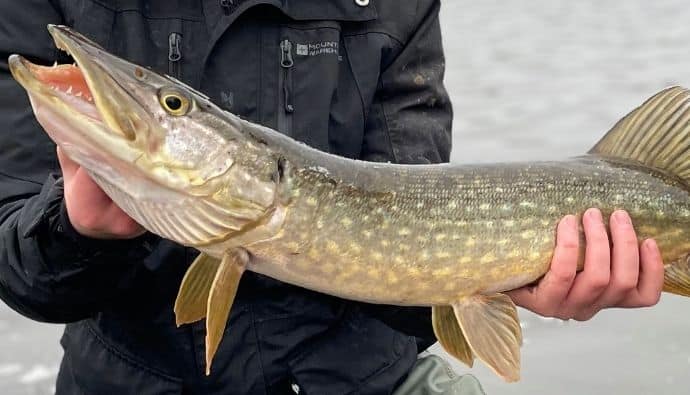 Ice fishing is one of the most exciting forms of fishing, particularly when you are angling for pike. The large size and aggressive nature of pike make them a top choice for ice anglers.

As an ice angler, the first step you must take to enjoy the best pike ice fishing experience is getting appropriate ice fishing lures.

You can deploy lipless crankbaits for ice fishing either by jigging or by letting them rest on the floor of the water. Using this lure with a jigging strategy involves twitching it and moving it around in order to give it the appearance of an injured fish and attract a large pike.

The other strategy involves suspending the lure in the water by making use of fishing weights. The vibration and wobbling that comes from jerking it from time to time will catch the attention of the pike. 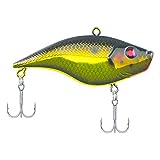 The Berkley Warpig is an effective lipless crankbait made of soft plastic. It comes in a special red craw color resembling live bait. It offers great sound and vibration to attractive pike in the water.

Spoons are popular among expert ice anglers, and for a good reason. Spoons are customized to fit the different needs of anglers, making them suitable for a classic lure for ice fishing. Spoons are designed to look like injured baitfish, with their color and movement helping to attract pike.

Spoons can also be combined with other types of lures, such as swimbaits, for the best results. They come in different colors, which ensures that they blend with your local forage.

This action creates vibrations that alert the pike to the presence of bait. There are different types of spoons, with each one having its unique feature.

Weedless spoons are best suited for angling in a weed bed, as they have a prong that prevents them from catching onto the water vegetation.

Rattle spoons are useful for the buzz that they make. They are noisy, making them effective as pike lures. Large curved spoons are named after their structure. 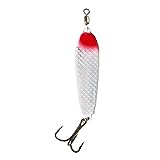 The War Eagle Jiggin’ Spoon is a fine choice for ice anglers looking for a reliable spoon for their northern pike fishing. It has a stout structure in order to withstand thrashing from the pike and secure your catch. A swivel is also in place to avoid twists in your fishing line.

Blade baits share similarities with both lipless crankbaits and spoons, making them some form of hybrid of both lures. Blade baits afford you vibration and wobbling that pique the sense of any pike. This lure can be used with live baits and is best deployed using jigging motions.

Attractor blades are blade baits that have blades connected to their split ring. This type of blade bait is used for the noise and flash that it creates when it is underwater. 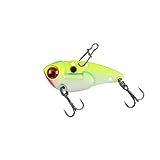 The Johnson Thinfisher Blade Bait is a modern blade bait designed with advanced features to make your fishing easier. It has a sonic rattle chamber which creates a buzz to attract pike in the water. It also comes with strong nickle hooks for holding your catch.

Spinners are common fixtures in the tackle box of many ice anglers. This type of lure is made up of a spinning blade, wire body, and a treble hook. Spinners can be best deployed by lowering them to the bottom of the water before bringing them back up.

You can then leave them to flutter, as the spinning blade will make enough buzz to alert the pike and lure them.

The Mepps Comet Mino is an excellent spinner for ice fishing. it features a reliable treble hook as well as a spinning blade that creates buzz. It is also great for bass fishing.

A soft plastic bait is a very effective lure for northern pike ice fishing. These lures, which are made of plastic, are designed to resemble fish.

The movement and color of soft plastic baits are structured after live baits, making it one of the best lures for large northern pike. Soft plastic baits usually take the form of minnows and baitfish. 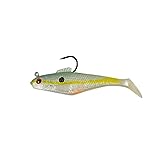 The Berkley Powerbait Pogy Swim Shad comes in firetiger color, which is attractive enough to lure pike. It also comes with a holographic foil which makes it look like a live bait adding flash to its appearance.

Swimbaits usually come with a tail and can be used with a jig head. To use them as lure, simply lower to the bottom of the water for about three seconds before bringing them up to two feet and repeating the action over again.

The fluttering tail movement of a swimbait resembles an injured fish, thereby making it a reliable lure for ice fishing. 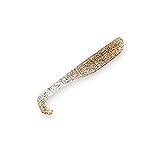 Measuring 8-inch in size, Z- Man Mag SwimZ Swimbait is perfect for luring a big pike. It is a weedless lure that can be worked with a jighead while angling for pike.

Gliders refer to lures that can move at pace through the depth of the hole when ice fishing. Gliding lures are effective and easy to operate. They are designed to look like other fish in the water column.

To use a glider, simply let it settle before pulling back. Do this repeatedly at an interval of 3 seconds between settling and retrieval.

The Rapala Jigging Rap is an efficient ice fishing lure with some amazing features. The Jigging Rap is designed like a baitfish coming in different colors, such as yellow perch to match local forage.

It is designed with a single hook on the nose and another one (usually reversed) on the tail. This gives it efficiency in catching northern pikes.

The fun of angling for northern pike through ice is too exciting to pass on. This is why it is important to equip yourself with the best lures in order to have an enjoyable and successful outing.

Pike live in different water bodies, including lakes, rivers, streams, and ponds, so you can enjoy fishing in your locality. These big fish are excellent hunters, so you have to beat them at their craft.

Look out for qualities like noise, movement, color, and flash, as well as flutter, when choosing an ice fishing lure. Overall, also ensure to use proper gear for ice fishing in order to ensure your safety.