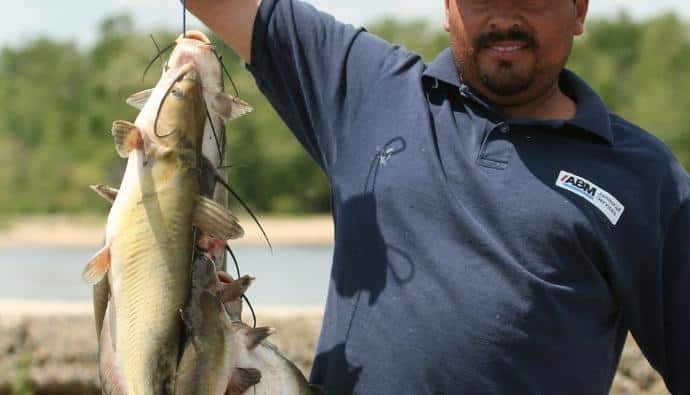 Catfish are one of the most popular and sought-after fish in the United States. They’re angled for in a myriad of ways from jugs, trotlines, traps, and catfish rods. Prized for their delicious flavor profile and ability to provide large fillets, catfish, or a mainstay in many seafood dishes.

While there are plenty of articles that discuss the most effective baits, lures, rigs, or locations to angle for catfish, one of the most overlooked components of successfully fishing for catfish is the best time of both day and year.

There are plenty of misnomers and myths about the best time to angle for the species, so this article covers the best times of day and year to angle for catfish, as well as a few tips to help make your catfishing trip more successful.

While there are four seasons for anglers to hit the water in search of catfish and plenty of the year yields good fishing, there is a small sliver of time that tends to have the results anglers are looking for. Let’s break catfishing down by season.

The water is cold, and catfish will be sluggish and lethargic. Apathetic towards food, the cold water pushes catfish towards the bottom and lower levels of the thermocline, where the temperature variation is minimal compared to the surface.

Their activity level is significantly reduced due to the lower levels of oxygen, lower temperatures, and less beat in the water during the colder months.

While anglers can certainly catch catfish during the winter months, it’s an uphill battle for sure. Much of the success relies upon being at the right place at the right time, selecting baits that present too good of an opportunity for catfish to pass up, such as a wounded minnow suspended in the water column via a Carolina rig or under a deep cork.

Finally, more temperate or sunny days should always be capitalized on, as noon yield the highest activity levels during winter.

Early spring can resemble winter in a lot of ways, with fish coming out of their lethargic state and beginning to increase their activity slowly.

Their feeding habits slowly ramp up to make up for their caloric deficit during the winter and fatten up for spawning. This can become problematic, however, with cold spikes during early spring completely shutting down what was a feeding frenzy the day before.

As spring progresses and the weather reaches a more consistent pattern, the catfish activity increases, eating to make up for all the weight lost during winter.

Spawning occurs from late spring to early summer, so year-round fishing reaches a crescendo from late April through June. Night time provides the best angling for catfish during spring.

With summer comes temperature extremes, often reaching the point where fish become lethargic and seek out deeper water, seeking solace from the oppressive sun and heat.

Their appetites can completely disappear, and in many locations where catfish are commonly found, these are devoid of the species completely.

However, summer can also be an incredibly successful time to angle for catfish as days with moderate temperatures are rich with recently spawned insects, amphibians, and fish.

During summer months, catfish usually seek out the colder waters of the bottom during the middle of the day and usually aren’t that active.

During the hours after dawn and preceding dusk, their activity reaches a crescendo, making it the prime time to angle for catfish during the summer

Fall is similar to spring in that it’s a period of transition. In ponds and streams, when temperatures drop, the warm waters that were once rich with bait become a last-minute feeding frenzy for catfish looking to stock up for the colder months.

The days begin to shorten, the nights lengthen, and once again, night fishing becomes one of the best times to angle for catfish.

However, with certain species such as the blue catfish, the cooling water ramps up their aggressiveness which lasts into winter.

Anglers looking to target catfish during the fall months should attempt to locate rich areas where catfish will be making their last ditch food run before the winter lethargy.

This slate blue, fork-tailed cat prefers colder water over sandy and rocky bottoms. Unlike the two species on this list, blue catfish prefer colder weather, with some of the best angling for them being in the dead of winter.

Favoring deep lakes or rivers, these catfish tend to congregate around structures rich with bait fish and crustaceans, making for easy meals.

The best time of day for blue catfish is usually at night, as these nocturnal predators thrive on their sense of smell to direct them to prey.

Channel catfish are best angled for from mid-spring through early summer. During this time, the catfish activity level increases from its lethargy in the colder months to full-fledged pre-spawning.

Channel catfish will consume as much prey as possible to fatten up for the activity, which is spawning.

This olive and gray catfish will often strike artificial lures but prefers the smelliest bait available for food.

Channel catfish like slow-moving water of medium depth, such as reservoirs and rivers. It forages along the bottom for worms and crustaceans.

The best time of day for Channel catfish is usually morning.

Flathead catfish can be angled for from spring through fall with varying amounts of success.

Usually difficult to find during the winter, these catfish prefer warmer waters that are slow-moving, such as ponds and creeks, preferring murky water that is filled with structures to ambush their prey from. Flathead catfish are the only species that exclusively feed on live bait.

Late spring through early summer is seasonally the best time to angle for flathead catfish. During this time, flatheads are spawning, and the area is rich with bait fish and insects, which comprise the best majority of a flathead’s diet.

The best time of day to seek out flathead catfish is the afternoon and into dusk, where they often move closer into the shallows in search of an easy meal.

Catfish are incredibly fun to angle for and are one of the most sought-after species of fish in America. Many anglers neglect to pay attention to the seasonal variance and time of day when fishing for these whiskered predators.

Each species has its own unique preference for time and season, and anglers who pay attention to this will find themselves filling up the stringer in no time.