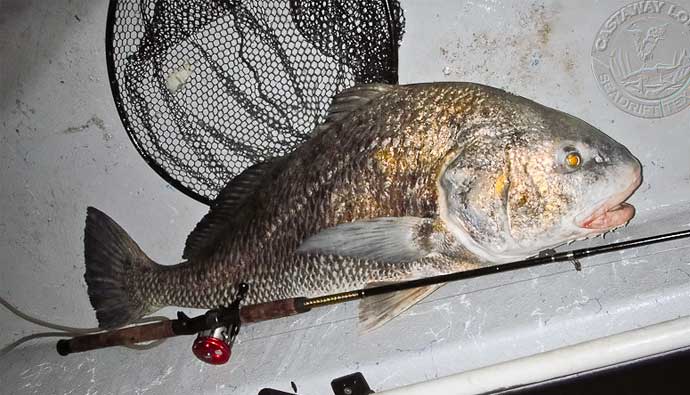 In this black drum fish guide, you’ll learn why this fish is so fun to target.

Black drum are a delicious cousin of the red drum that should be found ranging from the Chesapeake Bay to the coastal waters of Texas and Mexico.

This beautiful bottom-feeding fish can be an incredible catch for all skill levels. With the world record holder coming in at 113 pounds, drums will range from brackish estuaries to the open water of the Atlantic and Gulf of Mexico.

Small to midsize saltwater drums are delicious, while the larger members of the species tend to be riddled with worms and less than desirable.

Use this drumfish guide to help you catch more. We’ve covered where they live, what they eat, and much more.

Drum fish is called ‘drum’ because of the loud and distinctive drumming sounds it makes. It makes that noise by rapping muscles against the swim bladder during the breeding season to attract mates.

Considered to be a popular sport fish, the black drum fish has been in huge demand. Stricter restrictions placed on the endangered red drum sparked this.

Drum fish are bottom feeders and remain inshore in salt or brackish water. They like to hang near jetties, pier pilings, channels, bays, and estuaries. They’re found in the western Atlantic Ocean waters around Massachusetts and southern Florida. You can also find them across the Gulf and north of Mexico.

Black drum are a delicious cousin of the red drum.

Black drum spawn from April to the early days of June.

Drum are bottom feeders by nature, with inferior mouths which face downward. They are almost exclusively crustacean-eating creatures. With crushers in their throat, they will munch on just about anything with a shell.

They are nocturnal, which means they often feed at night. However, pursuing these fish in a boat at night can be dangerous, not for the novice angler.

As migratory creatures, drum prefer warm water. The smaller ones can push into actuaries or lower salinity water, while the larger ones tend to be in the golf or Atlantic, where the salinity levels are higher.

They are often confused with sheepshead. The black drum shares both a diet and environment with its bottom-feeding companion. However, the drum grows much larger while the sheepshead and has barbels beneath its chin.

Black drum fish can be found inshore along sandy bottoms in brackish or saltwater. Look for the fish near piers, breakwaters, jetties, estuaries, marshy areas, and shorelines.

How to Catch Black Drum Fish

Fishing for black drum is different from fishing for red drum because they are larger and stronger. Most anglers can catch fish with bottom fishing methods that are used in surf and inshore fishing.

Bottom rigs that are baited with clams are one of the most common fishing methods to catch a black drum in the mid-Atlantic where the fish is predominant.

Since black drums are carnivores, anglers use natural bait such as shrimp, crabs, squid, and smaller fish. Some are also commonly caught with spoons, plugs, flies, and jigs in conditions that are favorable for artificial bait. Use a stout tackle to hook this fighter when it is hooked, one with a 30 to 40-pound line and heavy terminal gear.

As anglers, choosing the right bait in conjunction with the environment and drums’ diet is an important part of achieving success in fishing for these delicious creatures.

Crabs are often top of the list for black drum angling. Cut in half or quarters; blue crabs can be incredibly effective, while smaller crabs can be placed as a hole on the hook.

Shrimp are also an excellent choice for drum. Live or dead, these two natural baits are surefire ways to attract the species you’re looking for.

Spoons will also be successful. However, note that neither of these has the same success rate as live or natural bait, while cut bait will work in select circumstances as well.

Insider Tip: When beating your hook with crabs, cracking the carapace or shell helps the scent of the bait to be released into the water which will attract drum.

The rigs used to catch black drum are fairly standard and relatively uncomplicated. A standard Carolina rig will work just fine in deeper water. This rig allows the bait to be moved about by the current along the bottom while being fixed by the sinker.

In shallow water, slip rigs are also effective. However, a circle hook, small split shot, and leader could be a simplistic setup to lock your bait into one place and wait for the prowling predator to come up on your offering.

A jig head may also be successfully implemented with a live shrimp in shallow water.

Insider tip: Using a leader with your light tackle whether it is heavy-duty fluorocarbon or even a steel one is an excellent addition to any angler’s rig.

Finding proper lighting for this is crucial. Angling from a well-lit bridge, pier, or inlet can yield incredible results.

As not all anglers have boats, finding access to areas where black drum may reside is imperative. Utilizing bridges and docks are an easy way to angle for these tasty fish.

Fishing the structures of tide side will yield the best results, as the bait naturally drifts into the structure rather than away from it.

Surf fishing for black drum is an incredibly effective way of angling for the species, however, it’s important to implement heavier tackle than using a light tackle.

The black drum will be the largest fish species aside from sharks that anglers may encounter out there, so the proper tackle is a necessity.

Before and after storms, drum may be found in the wash or near shore after the bottom has been stirred up.  Utilizing large bait that will stand out to the larger fish that prefer the higher salinity water is imperative to successfully surf fish.

Depending on the location in which you angle, the tackle will vary. However, a solid choice all around is a 7-foot medium action rod which has a 20-pound braided line on a 3000 4000 series reel.

When surf fishing, you might want to beef up their equipment and tackle, but for the most part, the standard listed above is completely adequate for bringing in large black drum.

During low tide, fish tend to concentrate on the edges and sometimes can even be sight fished for. When the tide is high, the drum will disperse and are damn near impossible to locate.

When fishing in shallow water for black drums, it’s essential to recognize that the fish can be easily spooked. Drum search shallow water for easy meals such as oysters and crustaceans. These oyster bars and reefs should be approached with stealth, and anglers should never motor directly on top of their fishing hole.

Insider Tip: When sight fishing for black drum, try not to cast on top of the fish, but rather place the bait in the drum’s path to not spook the fish.

River mouths or estuaries could be an advantageous position to fish from for black drum. Rivers will oftentimes empty into bays, and in the deeper holes situated within these estuaries black drum tend to congregate.

The amalgamation of structure and flow provides the perfect feeding spot for hungry bottom feeders like the drum.

Black drum are delicious and equally as fulfilling to angle for. Ranging from the northeast to the Gulf of Mexico, these large relatives of the red fish are a commonly sought-after species for both novice and experienced anglers alike.

Selecting the right location and the correct tackle and bait can be crucial in individuals bringing in the perfect saltwater dinner or a trophy drum. Night or day, these fish are a fun catch and a sure-fire way to enjoy putting fish on the table.

While the black drum fish can be caught all year, it is more abundant in some months than others. The biggest adults come together in deep passes and inlets to spawn between February and April.

So if you want to catch a big one, target the fish in deep water along the edge of a channel during these months. Make sure that you drift bait in the direction of the moving tide. That way, it will drift near their mouth rather than the tail.

How to Clean Black Drum Fish

How to Cook Black Drum Fish

Avoid black drum over 15 pounds. Compared to smaller-sized fish, older fish doesn’t taste as good. As for younger fish, you can easily spot them. They have 4 or 5 dark vertical bars on the body.

We’re sharing a simple recipe below if you plan to cook your catch.

Is black drum good to eat?

Drum fish is not bony, but it doesn’t have a lot of meat either. Yet, the flesh has a mild, sweet flavor that is firm and flaky as well, which makes it quite delicious.

Do black drum have worms?

Spaghetti worms are quite common in saltwater fish in the drum family, so yes, the black variety can have them as well. You may find them while filleting your catch.

How large can black drum get?

Large black drum can be as big as 40 pounds in weight and can live up to 35 years.

Black drum do not need complex rigs or fishing techniques, but this fish does put up a strong fight when it is hooked. Make sure that you have someone with you while fishing so you don’t go overboard while lugging one on deck!