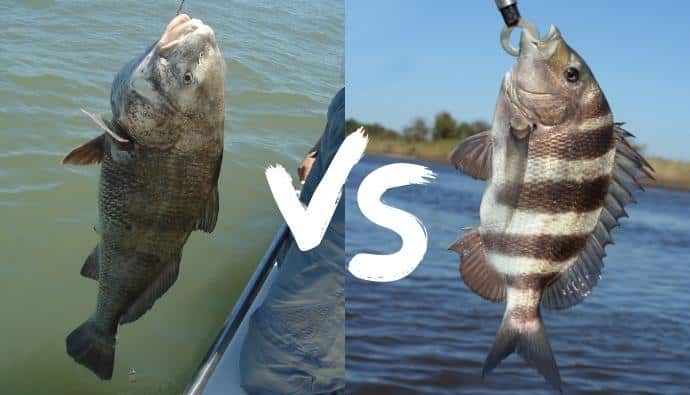 Black drum and sheepshead are two commonly confused but unique species of fish that are often caught from the Atlantic seaboard to the shores of Texas.

Both unique in feeding habits and anatomy, these fish can be an absolute blast to angle for.

However, it’s essential to distinguish the factors that set them apart. From their teeth to their fins, these fish look quite different though often mistaken for each other.

They also have different lifecycles and require different techniques and gear to catch.

Below are the differences between Black Drum and Sheepshead.

From southern New England to Mexico, the Black Drums habitat is vast. However, they are more prevalent south of New Jersey.

Bays, sounds, and inlets that vary in salinity levels are among their favorite habitats along coastlines but can also be found along piers and jetties during inclement weather.

Black Drum spawns from 7 p.m. to 10 p.m. every night from January through April when water temperatures range from 59 to 75 degrees Fahrenheit. During the early evening hours of spawning, females will lay 20 to 30 eggs per clutch.

Once fertilized, the eggs are carried out to sea by currents, where they will eventually hatch. After hatching, the pups will migrate to marshes and inlets to mature into adult Drums.

Black Drums grow into sexual maturity over four to five years, at which point they begin to reproduce in big groups where several thousand fish are congregated in large schools off the coast.

Redfish, Jack Crevalle, and Cow Nose rays are commonly interspersed throughout the schools. When the spawning season ends, these schools will quickly disperse.

The average life expectancy of a Black Drum is around 40 years, but some have lived as long as 58 years. Anglers can keep a maximum of five Black Drum each day, each measuring between 14″ and 30″.

Black Drum are bottom feeders and will eat a variety of crustaceans, including shrimp, crabs, oysters, and more. On the water, you need to know exactly what food sources are present in the ecosystem if you want to catch a Black Drum.

Carolina rigs and other bottom-targeting tackle are more commonly used by anglers, despite the occasional success of plastics.

Foraging with their chin barbels to root out prey,  Black Drums are bottom feeders. These fish eat a wide variety of shellfish, like clams and oysters.

They will also munch on crabs and other crustaceans with their robust throat teeth. Worms and fish are other familiar food sources for them, buried deep in the sediment at the bottom.

Throughout the western Atlantic Ocean, Sheepsheads can be found from Nova Scotia’s coast, commonly referred to as New Scotland, down to the Gulf of Mexico.

The most concentrated populations range from southwest Florida to the coast of Texas.

They inhabit inlets, reefs, and swamps but their biggest draw is structure. Mangrove swamps, jetties, piers, rocks, and reefs that are laden with barnacles are havens for Sheepshead.

Living up to 25 years, the Sheepshead reaches sexual maturity at 2 years old. They migrate offshore during the spring to spawn before returning to their safe haven of structures.

The larvae will hatch and return to shallow estuaries and grow before reaching sexual maturity themselves and repeating the cycle over.

Having huge, powerful teeth helps the Sheepshead break down and digest the shellfish it consumes. This fish can easily remove barnacles from pillars and rocks, thanks to its razor-sharp teeth.

What sets a young Black Drum apart from Sheepshead is the teeth. A Sheepshead’s mouth has incisors and molars that are the same size as a sheep’s teeth, and a grinder is just as large.

A Sheepshead has a  short, thick head, elevated back, and small mouth makes them easy to differentiate from a Black Drum.

On both sides of a Sheepshead are seven distinct and well-defined Black stripes. The rest of the body is grey or yellow, apart from these Black lines.

Note: The tip of the tail has a slight fork in it vs Black Drum tail is full.

Sheepshead are omnivorous, consuming insects, small animals, and plant matter as Juveniles. More aggressive than Black Drum, these fish will eat just about anything they can take a bite out of.

Juveniles will also eat plankton, larvae, and worms until they can handle larger quarries.

Sheepshead have incredible dentition, which allows them to munch through and consume barnacles. These teeth also will enable them to break through prey’s armor and shells.

Despite its bottom-feeding habits, Black Drum is delicious to eat. Fried to golden brown perfection, their flesh tends to be crisp and flaky, having a mild fish flavor.

Black Drum meat is high in omega-3 content, an added benefit besides its delicious taste and texture.

Eating Black Drum is the way to go for those looking to strengthen their immune system or improve their general well-being with Omega-3.

Sheepshead have Omega-3 fatty acids and protein in abundance and has delicious, white smooth flesh that cooks exceptionally well.

Sheepshead are full of DHA omega-three fatty acids and vitamins A, D, B-12, and B-12, usually only found in supplements. These vitamins are crucial to cognitive and mental development and promote brain health.

Sheepshead meat doesn’t fall off when cooking, making it easy to serve fish favored by many in the angling and culinary communities.

While these fish are pretty common in many locations, they can be some of the most difficult to catch.

In order to angle these fish correctly, it is essential to have the right tackle, including selecting the proper rod and reel before hitting the water.

Anglers utilizing light to medium-weight rods and reels can catch most game fish, including Black Drum.

Fishing with a shorter rod allows for more precise hooksets and prevents entanglements with the weeds or other potential snags.

Light-medium-strength rods and reels spooled with a 25-pound braid and fluorocarbon leader should be used to catch Black Drum.

Leaders are essential as they prevent line pops when working around underwater structures that may be jagged or riddled with barnacles.

When angling for a Sheepshead, medium or heavyweight rods and reels spooled with a 20-pound braid and a fluorocarbon leader should be used.

Not only do these fish have more bite than bark, but they also can be found in some of the most snag-prone locations.

With a diet that is heavy in barnacles, it’s not uncommon to have line breaks, A wire or fluorocarbon leader is a surefire way to ensure the fish stays on until you bring them ashore.

When angling for both of these fish, the two most effective rigs are the Carolina rig and a plain jig head.

Bating both of these rigs with cut bait, shrimp, crab, and other species common to both fish’s diets will yield the highest levels of success as these bottom feeders are always looking for an easy meal.

Though often mistaken for each other, Black Drum and Sheepshead are two different fish.

From their anatomy to their feeding habits to the way we angle for them, these fish are both delicious and enjoyable to have on the end of your line.

Anglers should consider what tackle they need when angling for these species, factoring in both the environment and the fish they’re targeting.

Both Sheepshead and Black Drum are delicious, and should you fill an icebox with your daily limit, Bon Appetite.

As always, good luck and stay safe out on the water.