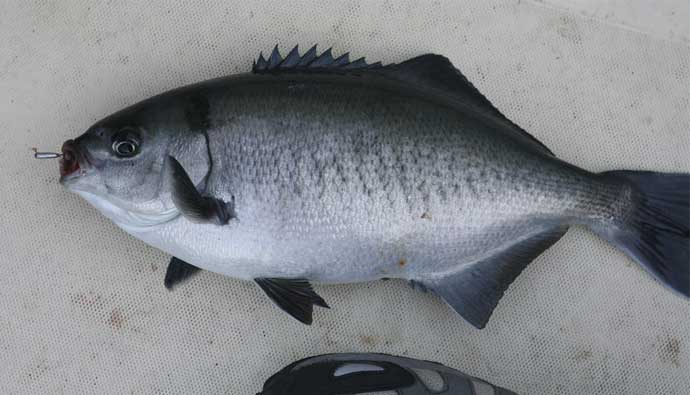 If you said yes, you need to catch the blue perch (halfmoon fish).

The fish can be found in waters that spread across the Gulf of California to Vancouver Island in British Columbia but they can also be found around the Channel Islands in Southern California.

This perch species is also known by other names such as island mackerel, blue wizard, blue perch, blue bass, etc.

This black perch is one of the many types of surf perch. The body of the half-moon is compressed and oval in shape while the head is blunt and the mouth is quite small. The top of the body is dark blue in color which shades to a blue-gray color to the sides and it has a white underbelly.

The reason why this California perch species is called half-moon is because of the unique shape of its tail which looks like a half-moon.

This fish eats kelps which is why it can be found in abundance near or around kelp beds. However, you can also spot half moons in shallow water and rocky areas. This fish is not in danger of being overfished.

Half moon perch typically inhabit shallow rocky areas, floating kelp paddies as well as kelp beds. Plus, this fish is also susceptible to disturbances that can compromise its survival such as pollution and habitat degradation.

In other words, if you are going half-moon bay pier fishing, make sure that the water does not have pollutants floating on top.

Some of the best piers you should go to include the Hermosa Beach Pier, Redondo Harbor Sportfishing Pier, Gaviota Pier, and Paradise Cove Pier.

If you prefer to fish for this Catalina blue perch by boat, you will need to go out in deep water. Half moon perch can also be found in loose schools of fish in mid-water as well as mixed together with schools of pile perch.

How to Catch Blue Perch

When it comes to catching this surf perch, rod and reel setups can fall into two categories.

For surf fishing from shore, you can either use a typical surf perch fishing setup using a long and surf rod complete with heavyweights and surf fishing reel to help you reach a far distance.

These can give you a large casting range but they can be quite difficult to handle and are not as sensitive as you may need them to be.

However, if you’re on a boat you can use a fast action, short to a mid-length rod made of graphite which is lighter and has a conventional or spinning reel.

These blue perch will tend to be close to your boat or structure so you won’t need anything special to catch them.

Use size 2 or 4 bait hooks and particularly baitholder or circle varieties. These do a great job of keeping the bait on the hook. Plus, use live bait such as marine worms, crabs, sand shrimp, and mussels to attract the fish.

If you’re looking for a fun perch to bring home for the dinner plate than try spearfishing for the Catalina halfmoon.

They are relatively easy to fish to shoot since they aren’t super skittish which allows you to get close before pulling the trigger.

A large speargun might be overkill, so try using a pole spear if you want to make this fish more challenging to catch.

The half moon perch is available all season long which means you can find it in abundance all year but they are more abundant from August to April.

It is an aggressive fighter and an excellent table fish. The blue perch fish spawns during the summer and one inch half moons can be found at the outer edge of kelp beds.

Adults, on the other hand, can be found inshore and they can grow to be about 7.5 inches long.

How to Clean Half Moon Fish

How to Cook Blue Perch

A: It has a compressed and oval body with a blunt head and a small mouth. The top of the body is dark blue in color which shades to a blue-gray color to the sides and it has a white underbelly

A: Herbivorous fish such as the half moon perch eat kelp.

Q: What does a halfmoon perch fish taste like?

A: It has a mild flavor that is not too fishy to eat.

The blue perch may be a feisty fighter in the water, but its scrumptious taste makes it an excellent catch. There are other surf perch or fish similar to perch you can catch using the methods mentioned in this guide.

If you have stories and tips to share about this, mention them in the comments below.