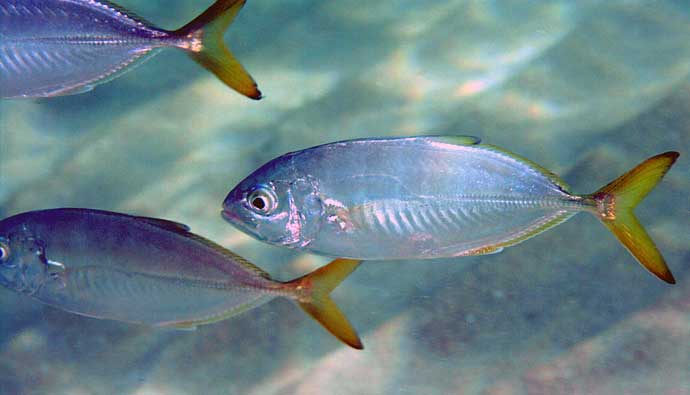 The blue runner fish is fun to catch and even use as bait.

This extensive guide explains how to catch and even cook this unique fish. We’ll also show you how to rig one up to catch other species.

The blue runner fish is a species that belong to Carangidae – the jack family. They’re found in the Atlantic Ocean in waters that range from Canada to Brazil and even from Great Britain to Angola. This species can reach up to 70 centimeters in length and weighs about 5 kilograms.

Blue runners are predatory fish that hunt crustaceans and other invertebrates for food. The fish inhabits both offshore and inshore habitats such as coral reefs. They’re found swimming around artificial structures like oil rigs. Juveniles like to congregate in lagoon waters and shallow reefs.

Class Osteichthyes fish are fast fish and push your gear to the limits, especially when catching them with a fly rod and reel.

This boney fish (Osteichthyes) remains inshore through most of its range, but it can be found in reefs that are 100m underwater. It is most common around reefs, upper slopes of deep reefs, and outer shelf edges.

Juveniles take shelter in inshore lagoons around mangroves, seagrass, and patches of coral reefs. They only swim out to deeper water as adults.

Some anglers have also caught the fish around the Mississippi delta. This means blue runners can tolerate lower salinities.

How to Catch Blue Runner Fish

This hardtail fish may be used as prized baitfish for larger game species, but that doesn’t mean they’re easily caught. The fish is powerful for its size, so use Sabikis with strong main lines that can pass a 50 to 60-pound test.

The best way to catch them is with a hook and line, but if you are using a rig, use the many gold set-up that comes with a weight attached to the bottom—Jig this around a wreck or market buoys blue runners can be found.

If you are trolling for the fish, use a blue runner as bait by hooking it through the cartilage in the nose. Use chum as bait to attract large schools, especially if you want to catch bigger fish with them.

Blue runner sportfishing is a blast! While they can be caught year-round, you can spot large schools during the spawning season. Florida runners spawn offshore year-round.

Spawning activity peaks from June to August, especially in waters around the Gulf of Mexico.

A secondary peak also occurs during October in northwest Florida, while in others, the fish spawns between January and August.

How to Clean Blue Runners

How to Rig Blue Runners as Bait

To use blue runner as live bait, use circle hooks, especially if you are casting, drifting, fishing on anchor, or slow trolling. All you need to do is attach a hook to the roof of the mouth of the fish and pierce it through the upper jaw. To make it drift, attach a J-hook through the back of the fish and above the dorsal fin.

Is the blue runner fish poisonous?

The blue jackfish (blue runner) is a baitfish, but larger ones tend to carry the ciguatera toxin in their flesh.

The flesh of this fish is quite delicious and flaky even though most people use it to catch larger fish.

What do blue runners eat?

This boney fish is a fast-swimming predator that prefers to eat smaller fish in coastal waters. Yet, some also eat crustaceans, shrimp, and copepods. More significant adults eat large zooplankton, especially during the summer months, and some also eat juvenile fish during this time.

The blue runner fish, is abundant all year round, but the best time to catch large schools is during the spawning season.

Give the blue runner a chance, and don’t forget to use our blue runner recipe mentioned earlier. Though blue runner as seafood is scarce in restaurants, that doesn’t mean you shouldn’t give the recipes a try.

Do you have any tips, tricks, and strategies to catch this fish in droves?