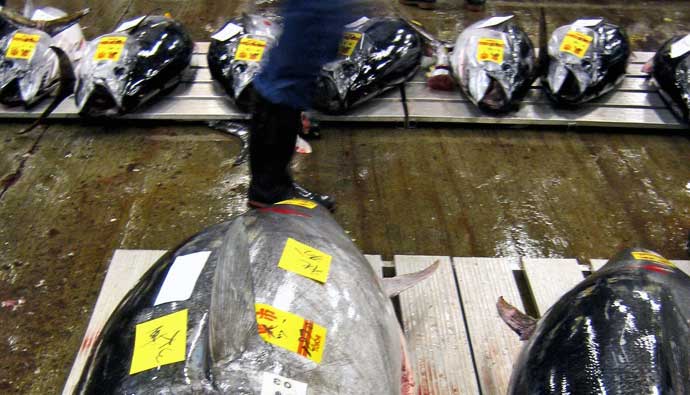 Bluefin tuna fishing has a special place in the hearts of all Southern California anglers.

This torpedo of muscle puts up a powerful fight both on rod and reel and spearfishing.

Considered to be the one of the best tuna fish by veteran anglers, this powerful fish will give you one heck of a fight if you manage to hook it.

Let’s learn how you can catch it too!

For smaller tuna up to 70 pounds

Also known as the northern bluefin tuna, tunny, and giant bluefin tuna, this fish has a conical head and a rather largemouth. This species of tuna is made for speed and can live up to 40 years hunting and feeding on schools of herring, mackerel, and even eels.

Considered by some as the best tuna, this fish hunts by sight and is known for having the sharpest vision of any bony fish.

The back of the fish is dark blue or black and it has silvery sides. The second dorsal fin is larger than the first one and is usually reddish-brown in color. The best tuna of them all, the meat of the bluefin is dark red and is known for being fatty but flavorful.

Giant bluefin tuna are usually found swimming 100 feet below the surface of the ocean. They spend most of their time on the outer banks where they hunt for bluefish and other small baitfish.

How to Catch Bluefin Tuna

Before going on a bluefin tuna fishing trip, make sure you have the right bluefin tuna gear to overcome this gorgeous monster fish. Use a short and heavy action rod that has a heavy-duty spinning reel that can withstand 50 lb of drag.

If you are topwater fishing, rig the reel with a 65 lb to 80 lb braided line depending on the weight of the fish. Use a 40 lb to 100+ lb fluorocarbon bite leaders. The bluefin will find any weak link and snap it like a twig so double-check everything before your lines go into the water.

Plus, stock custom big game lures such as 9” plugs and 12 oz jigs. Use 3/0 to 5/0 circle hooks instead of treble ones when fishing live bait.

The first bluefin starts appearing in around November depending on water temperatures and can stick around until May. During tuna season, the tuna can be found inshore and as near as 10 miles from the beach. You can also take the tuna in over 100 feet of water between November and December.

Yet, the late tuna fishing season is the best time to catch these beauties i.e. between February and April. That is when the giant bluefin appears offshore and you may have to travel about 50 miles to find some.

How to Clean Bluefin Tuna

How to Cook Bluefin Tuna

Q: What do bluefin tuna eat?

A: Bluefins are predators and usually hunt for smaller fish such as sardines, herring, and mackerel. It has also been known to eat invertebrates such as crustaceans and fish.

Q: What gives the bluefin tuna its strength?

A: The bluefin has a lot of muscular strength which it channels through a pair of tendons to its caudal fins that it uses to propel itself forward.

Q: Why are bluefin tuna endangered?

A: The Atlantic bluefin tuna is the largest tuna species that is endangered because of massive overfishing.

These bluefin tuna techniques should help you to locate and hook this elusive and powerful fish. Just don’t expect to land whoppers right away. They are a powerful fish and take practice to actually land them.

They are also hard to find, so make sure you have deep pockets for gas!

If you have some tips and strategies that worked well for you to share them in the comment section and do share this guide if you liked it.