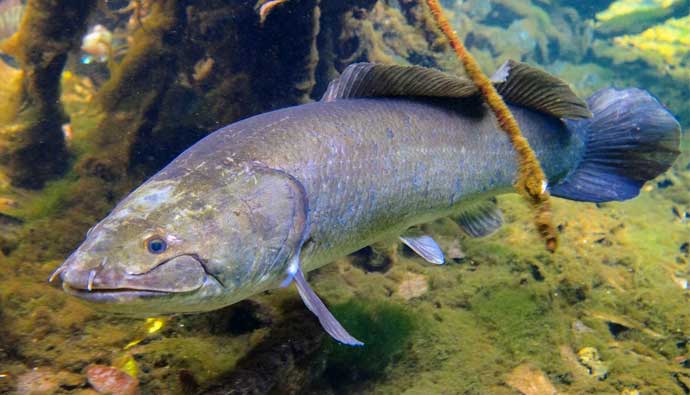 Old-timers will call a bowfin amia calva a grinnell fish, but one thing is for sure, they are an ancient form of fish.

That means that there aren’t many fish that are similar in the family lineage. Possibly the closest relative would be a gar. They are similar to gar in that they can thrive in shallower bodies of water and have a modified swim bladder. This bladder allows them to gulp air when the water level depletes due to extreme droughts.

What’s cool about these fish is that during the bowfin spawn their fins will turn an aqua-marine color. That means their color shifts a bit to look more like a parrot.

If you look closely at their mouths you’ll see tons of tiny teeth that will rip you up if you stick your hand in there. You’re going to want to throw on some cut bait on a fish finder rig and wait for the run. They run similar to catfish, so make sure you set the hook well once they take off.

This guide will help you prepare for your next bowfin fishing adventure. Let’s dive in!

The bowfin fish can be found in sluggish North American waters that range from the Great Lakes, North Carolina, all the way to the Gulf of Mexico.

It is also known as mudfish, beaverfish, alcaraz, marshfish, swamp trout, griddle, dogfish, and choupique. This freshwater fish can breathe air as well as underwater which is why they can also be found in low-oxygen waters. It is also the only living survivor of a group of fish whose fossils date back to the age of the dinosaurs!

The freshwater dogfish or bowfin has a long elongated body and is almost entirely cylindrical with a long dorsal fin that extends from the middle of the back down to the tail. It has a distinct black spot on the upper base of the tail which is meant to confuse predators. The mouth is large and is filled with several sharp teeth.

Bowfins can usually be found in lowlands in brackish water, clear and vegetation-rich streams, and oxbow lakes. The fish prefers clear water that has enough vegetation that it can hide in but it can tolerate a bit of mud and silt.

Adults can be found deep underwater but they venture out in the shallows at night during the breeding season. They can also be found in submerged roots and logs.

Two words that speak volumes about where to catch big ones is dogfish Ontario…Canada sports some good size bowfin if you venture up that way.

How to Catch Bowfin 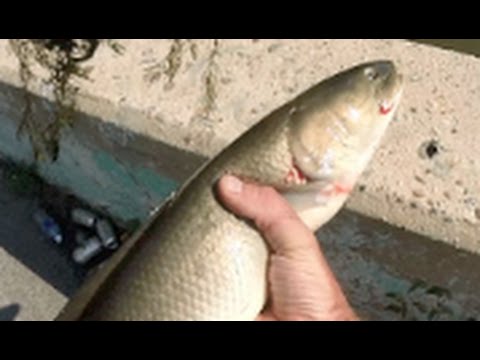 The bowfin fish is not lightweight but you need to have a light touch to hook them. The fish is quite aggressive and will strike both subsurface and top-water presentations so you don’t need to be picky with the tackle.

In general, medium-light rods or light rods are the best choices for catching this fish. Look for it in areas that have a lot of weeds such as bogs.

It will bite at both live and dead bait such as shrimp, crayfish, nightcrawlers, minnows or shad but you can also use larval salamanders.

If you prefer to use artificial lures you can use any bass fishing lure such as spinners, minnow jigs, and crankbaits. Just make sure they are made of metal. The fish has very sharp teeth that do short work on soft plastics.

One common bait used in New Jersey a lot is sunfish cut bait. Throw on a size that works well with the hooks you are using. Remember small bait small hooks and big bait bigger hooks. If you’re allowed more than one rod in the water, then it’s a good call to try different size hooks to see what they bite.

Use these tips below so you can land some large bowfin fish.

The best time to catch this game fish is when it is spawning between April and June. That is when this prehistoric fish comes up to the shallows to breed and build nests.

Bowfin doesn’t do anything special while spawning like building a nest. They tend to have the females lay their eggs in one spot. The male bowfin will then come by and fertilize.

The secret to having good-tasting bowfin meat is keeping it alive until you’re ready to clean it. That’s because the flesh is soft and you don’t want it to spoil or have an off-putting flavor. What seems to prevent this is having fresh bowfin that can be cooked quickly after the fish has been killed.

To check that the bowfin is properly bled, you’ll need to check the gills to see that the deep red has gone down to more of a pinkish color. If you don’t bleed the fish then the bowfin will have a rough taste.

Another way to bleed is to cut the gills and place the fish in a bucket of water to have the blood pull out.

After the blood has been removed, use the newspaper to remove the bowfin slime since they are a slimy fish.

Scale the mudfish as soon as you catch it using either a butter knife or a scraper or skin the fish completely if you want to avoid scaling. Since the bowfin skin is soft, the latter is the preferred method. Use the newspaper to hold the head of the fish while you cut the scales off with your knife.

One thing to remember when cleaning a bowfin is to make sure that you don’t spill the innards on your meat. If you do it correctly you can remove the head and pull the entire guts out without having to cut open the bottom of the bowfin cavity.

So to start this, use a sharp knife and start cutting behind the pectoral fins. Cut about half an inch into the flesh and move the knife upwards towards the bowfin head right up to the lower jaw.

Reach into the exposed cavity and pull out the guts of the fish at the base of the head. Use your knife to pull as much out as you can.

Apparently, if you find roe in the bowfin, it’s actually considered a delicacy in Louisiana.

Scrape out the swim bladder and the liver which are located at the center of the bowfin and the backbone.

Cut off the gills, the head, and the tail completely.

Cut off fillets from the fish quickly and put them on ice till you get back to shore or home. The fresher you can keep the fillets the better they will taste.

How to Cook Bowfin

Can you eat mudfish? Make sure that the fillets you use are fresh or the fish will ball up in your mouths like cotton and taste just as nasty.

If you want to mix the fillets into potatoes to make patties, here’s a good recipe for it.

Another method of cooking, especially popular in parts of North America, would be to bake fry the fillets. Take your fillets and coat them in whatever egg-based batter you desire. Instead of frying them, place the fillets in a baking pan.

Spray or drizzle some oil on the top size of the fillets and put them in the oven. Cook them on parchment paper in the oven at 425 degrees for 15-20 minutes. Then check them and if they are looking good, then flip them over and cook for another 15-20 minutes.

They should come out nice a crispy without being soaked through with oil.

A: While most anglers consider bowfin to be a trash fish, it can actually taste pretty good if it is cooked immediately after it is caught.

Q: What do bowfin eat?

A: The bowfin is an ambush predator that preys on frogs, crayfish, mollusks, and aquatic insects. Young ones eat insects and microscopic organisms.

Q: How long do bowfin live?

A: The maximum lifespan of this fish is 10 years but captive ones have been known to live for 30 years.

The best way to catch them is by bringing a few rods and reels with you with various setups. Leave them in the water and see which bait is working best. A lot of times you’ll be treating this type of fishing the same way you’d go for catfish. You can leave the drag loose or even keep it open bail.

Wait for the fish to take your bait and set the hook. If you’re using circle hooks, you won’t need to worry about setting the hook as much.

Since they are scavengers you’ll likely be able to get them on nearly any size hook, but we like to use the smallest hook for the job.