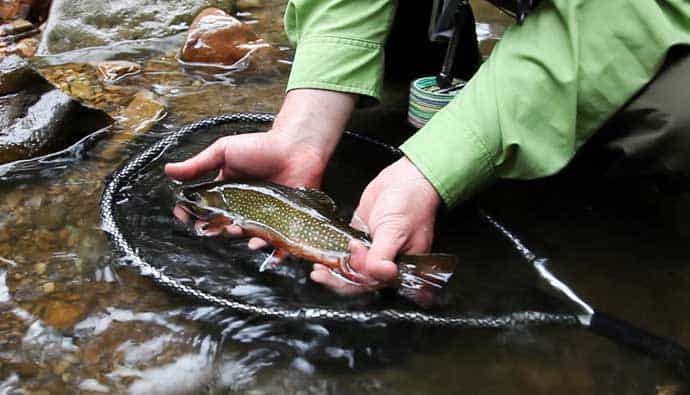 A big brook trout is one of my favorite trout to catch in the upper Sierras. I wanted to make sure you had a handy brook trout fishing tips guide to help you land a bunch.

Also known as Brookies, this trout is known for its beautiful olive-green coloring and yellow speckles that stretch across its back and sides. Although commonly considered a trout variety, brook trout is actually a member of the char genus and belongs to the Salmonidae family.

In its native habitat and other areas where their populations are high, brook trout is quite popular amongst fishing enthusiasts. Even though it’s considered elusive, it can be quite a catch.

There are potamodromous and anadromous populations of brook charr that are native to Lake Superior and Maine, respectively. They migrate to the waters to spawn and are commonly known as coasters.

However, habitat loss and overfishing have reduced the coaster populations of squaretail in these locations, increasingly confining them to higher elevations. Fortunately, efforts to restore and recover coaster trout populations are underway.

Even though brook trout is famous for being the Michigan state fish, it is also the state fish of eight more, including New Hampshire, New Jersey, New York, North Carolina, Pennsylvania, Vermont, Virginia, and West Virginia.

As they are commonly found to cohabitate, people often get confused with brook vs. brown trout. Fortunately, the differences are easily distinguishable. For instance, the brown trout has a golden-brown body while the brook trout is olive-green.

Furthermore, the brook trout is decorated with red spots with bluish halos while the brown trout has red or yellow spots without edges or halos.

They are found in large and small lakes, rivers, creeks, and springs of fresh, high purity waters. In the US, they can be found from the Hudson Bay basin and North Eastern Canada to a small portion of the upper Mississippi River drainage. You can also find them in Atlantic coastal areas from Maine to New Jersey and Georgia, along the Appalachian Mountains.

How to Catch Brook Trout

Even though the brook trout is not the biggest trout, it is a beautiful fish that makes excellent table fare and challenging sport. Common angling techniques for brook trout include fly fishing and all other forms of fishing.

A lightweight flexible rod with a spinning reel and a 6-pound test line is ideal for catching brook trout. Other than that, the same light tackle that is recommended for lake fishing works well for brook trout.

For brook trout, small lures work great. A variety of small artificial lures, not more than 2 inches long are ideal.

For example, you can use the:

As for bait, brook trout are opportunistic feeders and will take to most baits easily. Common trout baits work fine. However, make sure that you are allowed to use live bait where you are fishing.

When you are fishing for brookies, you’ll want to get the fly to drop down to where they are resting in the calm pockets of the river or stream. That means you’ll likely want to bring along some split shot weight or sinking line to help drop the flies down a bit.

Depending on the season you can use wet fly, dry fly, or even a dry fly nymph dropper setup. The fine folks over at Wilderness North recommend the following files:

Don’t forget, if you’re in higher elevation and don’t want to carry as much stuff, you can still catch brook trout on the Tenkara rod.

Brook trout prefer to live in cold waters of 53 degrees Fahrenheit or lower. This is why they are mostly found in waters locates in colder areas, such as the Appalachian Mountains. In spring, you can find them in any river section. As the weather starts warming up in summer, you will probably have to travel downstream.

In winter, you can find brook trout about 10 feet deep and around the surface. In spring, they go deeper to find cooler waters at about 10-20 feet. Summer can be trickier as they travel to the deepest part of the water body.

How to Clean Brook Trout

How to Cook Brookies

A: They don’t have a particularly long lifespan and typically live for 3 to 4 years.

A: They are really good to eat. They are quick to cook and have a mild flavor. However, they can get a fishy taste as they get bigger and better off released than cooked.

Q: What do they eat?

A: They are opportunistic feeders and mostly eat small insects. Bigger fish preset larger invertebrates, including aquatic insects, snails, worms, and side swimmers. Some also feed on small fishes like minnows.

Even though they are hard to catch, a simple rod and reel are ideal for fishing this trout. Stay close to shorelines and shallow bubbling brooks and river mouths. Cast your line so it reached the bottom.

This can be a slow process but with a little bit of patience, you will be rewarded with a catch of a lifetime.

Easily spooked, brookies can be a challenge for anglers. However, they are still coveted and can be exciting to catch and delicious to eat later on.