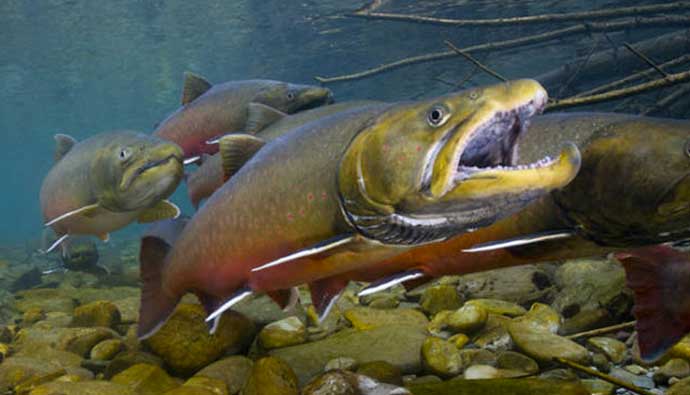 Bull trout are actually members of the salmon family. This family is also known as char.

This trout can be exciting to catch. They really put up a good fight. Some anglers refer to catching one as “wrestling a bull trout”

Although bull trout are considered threatened by the department of conservation, this trout can be found in many parts of the world. A large percentage being in Europe.

Be sure to check out our full guide on Trout Fishing Tips.

When you decide to go on a bull trout fishing adventure, you do not need complicated gear. As with other species of trout, bull trout are opportunistic feeders and will strike anything they think is an easy meal.

In this guide, we are going to cover the basic information on this trout. Where to find them, how to fish for them, the type of gear to use to catch them, and much more!

What Are Bull Trout?

Early anglers referred to bull trout as “salmon trout” because of their large size and migratory habits.

Bull trout, Dolly Varden and lake trout are species of char native to the northwest. This trout, like other char, have differences in body characteristics behavior across their range. They can grow to more than 20 pounds in lake environments.

Char is different than salmon and are distinguished from other trout and salmon by the absence of teeth in the roof of the mouth. Presence of light-colored spots on a dark background, the absence of spots on the dorsal fin. Small scales and differences in the structure of their skeleton are also indicators.

Of the two species, this trout is larger and primarily an inland species. While Dolly Varden trout are generally smaller and distributed primarily in coastal areas. In Washington, both species are present in the Puget Sound area.

This trout reaches sexual maturity at between four and seven years of age and are known to live as long as 12 years. They spawn in the fall after temperatures drop below 48 degrees Fahrenheit.

Many spawning areas are in areas with cold water springs or areas where streamflow is aided by groundwater.

Fry may remain in the stream bed for up to three weeks before emerging. Juvenile fish stay close to the stream bottom.

It is not unusual for bull trout to remain in areas where they were spawned. Or migrate from small streams to larger streams and rivers or from streams to lakes, reservoirs or saltwater.

In many areas, continued bull trout survival is threatened by a combination of factors rather than one major problem.

An example of this is past and continuing land management activities that have degraded stream habitat. Especially along with larger river systems and stream areas located in valley bottoms. This can block the bull trout’s migration route to spawn.

Another example would be introduced brook trout which are hybrids. These brook trout can spawn with bull trout creating sterile offspring.

Brook trout also reproduce earlier and at a higher rate than bull trout so this trout’s fry may be eaten by these non-native trout.

This phrase reminds you that if the dorsal fin on a trout you have caught is a clear or amber color with no black marks, it is probably a bull trout. It should be released.

Where Can You Find Bull Trout?

These trout are native throughout the Pacific Northwest. Also throughout the Columbia River Basin and east to western Montana. And south to the Jarbidge River in northern Nevada.

The Klamath Basin in Oregon, the McCloud River in California and north to Alberta, British Columbia.

Canadian bull trout fishing was and still is a very active sport. However because of the threatened status of these trout, anglers there are practicing catch and release fishing only.

These trout prefer cooler water temperatures. For this reason, bull trout found in creeks and streams, as well as lakes, will usually stay in the deeper water during the warmer months.

How To Catch Bull Trout

With this in mind, here are some tips to help you land one of these hard fighting fish. And safely release it back for someone else to catch or to go on and help replenish the population.

Bull trout like its relative trout family, are opportunistic feeders. Bull trout will often lay in wait for a meal to swim by.

The younger fry will stay close to the stream floor and feed on plankton until they are old enough to go after prey fish.

Bull trout can usually be found around rocks and pools with moving water. This is because this is the most oxygen-rich area. They will conserve as much energy as possible by waiting for a meal to come by.

This is why it is important to cast upstream and let the current bring your lure downstream.

The best lure actions for bull trout are ones that resemble baitfish. Spin casting with jigs, minnow imitating crankbaits, spoons, and spinners are all productive methods of fishing for these trout.

Bull trout lures should have a single barbless hook as these trout are catch and release only in most areas.

While many anglers love the challenge of fly fishing for these trout, conventional gear works just as well for bull trout as fly gear.

Spin casting for Bull Trout can be done with a 7-foot medium-action graphite spinning rod with a matching reel spooled with 8 to 12-pound test line.

The Cadence Fishing CC4 Spinning Combo is an affordable highly rated setup that will hold up to the hard fighting bull trout.

When it comes to fly fishing for bull trout, a 9-foot graphite rod that is a 5 to 8 weight with a matching disc drag reel will work for most areas.

Wild Water offers a great fly fishing combo that is affordable and durable. This combo is designed with the first time fly fisherman in mind.

Most trout anglers will tell you when it comes to these trout, keep it simple. And enjoy the trip.

Illegal harvest has posed a problem for bull trout, especially when it occurs in the spawning tributary.

In the past, poachers have used pitchforks, spears, and even dynamite to illegally take bull trout. These trout are highly visible in the small spawning tributaries.

Since these trout were put on the threatened species list in 1998, most areas have adopted a catch and release policy.

Along with the catch and release policy, barbless hooks are also mandatory when fishing for these trout.

Dams and barriers that have been constructed over the years have affected the bull trout’s ability to migrate to spawning grounds.

This, along with non-native species being introduced, that compete for food affect the reproduction of these trout, have helped contribute to their decline.

Conservation officials are working to create passes where these trout can travel to their spawning grounds. Beyond this, they have put the catch and release policy into effect.

What You Can Do To Help Protect Bull Trout

Bull trout are a fish no one wants to see go extinct. If we protect them and help get the numbers up, they will be here for future generations to enjoy fishing for.

Some of the things you can do to help are:

Do not pollute streams and waterways. This is a general rule but especially important where bull trout are found.

If you do see trash or debris in the water and can safely reach it, do the bull trout a favor and remove it. If you see chemical contaminants, report this to your conservation officials immediately.

Bull trout are fun and exciting to catch. They fight from the time you hook them until you land them.

These trout, in good condition, can reach well over 15-pounds as an average. If you are lucky enough to hook one of these large trout, you will have a fight you will never forget.

As you have read, these trout are in need of our help. If we want to continue fishing for these excellent fighting fish, we have to act.

If we do not protect and help preserve these trout, there is little doubt that it will not be around for future generations.

With careful stewardship, we can all enjoy this important native species for generations to come.

Let us know below if you’ve caught a bull trout and how big!