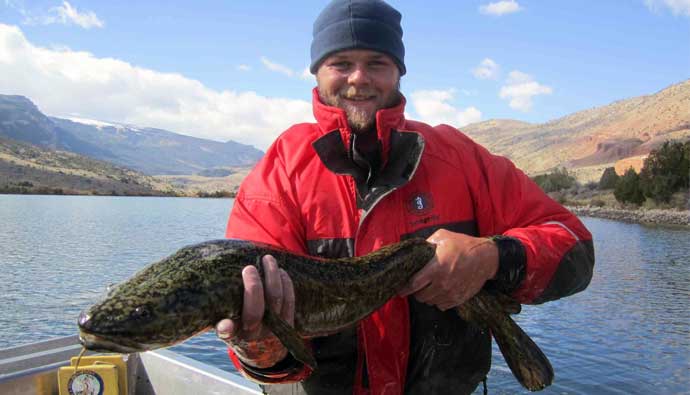 Burbot is an interesting fish to target because they live under the ice and are a fierce predator.

It’s not uncommon for them to attack fish the same size as them. They also target the eggs of species like sockeye salmon so they are known to wreak havoc on other fish populations like brown and lake trout.

For example, in Utah, the Utah Division of Fish and Game have a no release, catch and kill policy for burbot.

We hope you find this guide helpful to catch a few this ice-fishing season.

The burbot is not the most attractive fish and does not fight as hard but they are still popular sport fish. This unusual looking fish has mottle skin that ranges from black to olive and yellow in color.

Also known as lingcod, methy, lawyer and mud shark. The fish can be found throughout North America, Asia, and Europe in large clear, and glacial rivers and lakes. Young burbots survive on zooplankton and insects while adults prefer fish.

Burbot prefers to remain in large and cold lakes, reservoirs and rivers. Yet it prefers freshwater habitats and thrives in brackish environments. This is especially true when it is spawning.

In summer, the burbot can be found in colder water under the thermocline. It can tolerate a range of substrates from the rubble to gravel for feeding.

Burbot can be found in parts of Canada and colder regions of the United States and Europe.

How to Catch Burbot

There are three main methods that are popular with catching burbot. One is called still-fishing which employs heavy sinkers and dead or alive stink bait. The second is active which employs several types of heavy lures. The third is, of course, ice fishing since burbot is primarily a winter target.

If you are going for live bait, use eels, crayfish, whitefish, nightcrawlers, leeches, snails or freshwater mussels. You can also use any benthic fish that dwell in the lake with the burbot but it is not very picky. For dead bait use strips of salmon, sucker, carp or liver. Use glow in the dark burbot lures, spoons, and spinners if you are going after them at night.

You can get away with 8 lb braid, just make sure you put a monofilament or fluorocarbon leader for a shock absorber. Generally, your walleye setup will work for burbot too.

As the temperature drops the burbot becomes more active and can be caught in droves. The best time to catch burbot in the winter months i.e. in December, January, and February.

The freshwater ling spawns in the middle of winter during severe frost a period which can last over 2 weeks. During this time burbot doesn’t feed so you should angle for it when it begins to fatten after spawning.

How to Cook Burbot

Burbot eating ranks high for those anglers who catch them. Similar to fishermen who do a lot of ling fishing, this freshwater ling is great table fare.

Let’s see how to turn this delicious wildlife into a meal.

Q: Are burbot good to eat?

A: Yes, the firm and white flesh of burbot taste like haddock and cod and is excellent when it is served fried or broiled.

Q: How big do burbot get?

A: Burbot are piscivores and they prey on lamprey, grayling, whitefish, trout, stickleback and even perch.

The best time to fish for burbot is during the night in the middle of winter if you can brave the severe weather and the dark. Make sure that you have others with you in case you fall into the deep and freezing water.

This freshwater fish is known for coiling around arms that are trying to unhook it. Since it can be quite heavy, you may find yourself in the water with it.