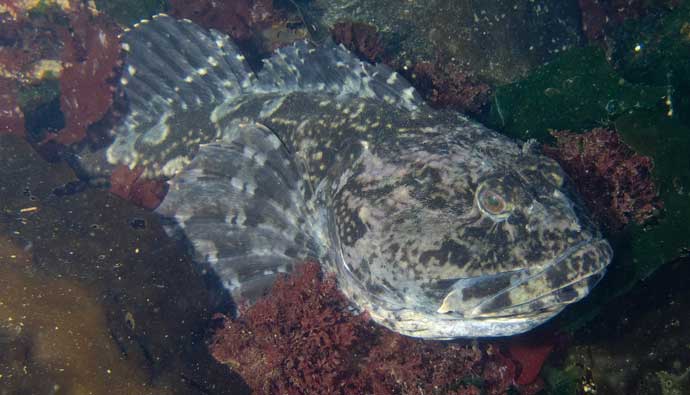 Is the spiny cabezon fish giving you a hard time as an angler? Before you can successfully catch this ‘thorny’ fish, you need to know it inside and out.

The cabezon fish is the only member of its genus. It’s a large species of the sculpin which is native to the Pacific coast of North America. Also known as the tongue-in-cheek ‘mother in law fish’ because of its loud mouth and constant croaking.

This fish is scale-less its name literally translates to ‘scorpion fish.’

Like other sculpins, the cabezon has a wide body that tapers to a slender and compressed tail. It has a broad bony support under the eye which connects bone with the front part of the gill cover.

A pair of longer flaps is located right behind the eyes and larger species have 11 spines on the dorsal fin. The mouth of this fish is quite broad and is filled with several small teeth. Unfortunately, the Cachorrito cabezon is endangered due to overfishing down in Mexico.

Found mainly in the Pacific coast of North America, cabezon usually frequents shallow and rocky areas in the water such as intertidal pools, around jetties, rocky reefs, kelp beds along with an area that has a lot of algae growth. Most tend to just sit rather than swim in the water right on top of submerged rock ledges.

How to Catch Cabezon (And What Gears to Use)

Most of the ones you catch from pier fishing will be fairly small in size but you can also get lucky enough to catch large 12-pound ones.

To be prepared for either, use a medium-sized cabezon tackle with line testing that can withstand about 15 pounds.

The best cabezon bait you can use include:

This fish will try and take a bite from anything that looks like food (including fish eggs).

The good news is that even though they prefer to hide in the shallows and rarely swim out of cover, if you can find one, you can find more. Plus, the fish is anything but hook shy.

If you are using shore crab as bait, insert the book at the rear by pushing it up through it. The fish will go for the bait and take it whole in its mouth which will effectively hook it.

When to Catch Cabezon Fish

This bottom-dweller fish is slow to grow even though it can be caught year-round. It usually spawns during the winter and fall months but most fisheries discourage fishing during those times so that the fish can be allowed to grow large enough to be a hefty catch.

Plus, anglers who fish from boats have far greater chances of catching more cabezon than ones that fish from piers or from the shore.

The opposite can be the case when the fish migrates to shallow water to spawn. Whatever condition or time of year you fish for this sculpin, you can use a conventional tackle or if you prefer the rocky shore, use the aforementioned poke pole.

Since cabezon is bottom-dwelling fish that prefer to hide between rocks and in sandy pits, you should use a pole spear to snare them. These are perfect for use in shallow water and if you don’t want to dive too deep for the fish. Make sure that you stalk the fish calmly with gentle movements so that it doesn’t get spooked and swim off to another hiding hole.

You basically have to pull yourself over rocks and stones using your free hand. Use freediving fins for steering purposes only and stop occasionally when you find appropriate cover. If it notices you, the fish may head towards the open sea so make sure your polespear is positioned accordingly.

How to Cook Cabezon Fish

Sculpins are delicious fish. They can be a little weird at first to clean and can be dangerous if you’re not careful with their spines.

How to Clean Cabezon

How to Cook Cabezon (Cabezon Recipe)

While cabezon meat can be consumed safely, and its eggs are highly poisonous and can prove fatal if eaten. You don’t have to worry about their spines as much as rockfish.

Why is cabezon meat blue in color?

This is due to a rare bile pigment in the meat of this fish called biliverdin, which turns the blood serum of the cabezon a rare turquoise blue. This is why it is often referred to as the ‘fish with blue meat.’

Is snagging fish illegal in California?

According to California Fish and Game laws, snagging a fish outside its mouth is illegal.

Cabezon may not win any beauty contests in the fish world, but its taste is considered to be one of the best amidst seafood aficionados.

The best part is that even though luring it out can take some patience, you don’t necessarily have to invest in heavy equipment to increase your chances of catching it. As mentioned before, a simple tackle, pole spear or a poke pole should be sufficient.