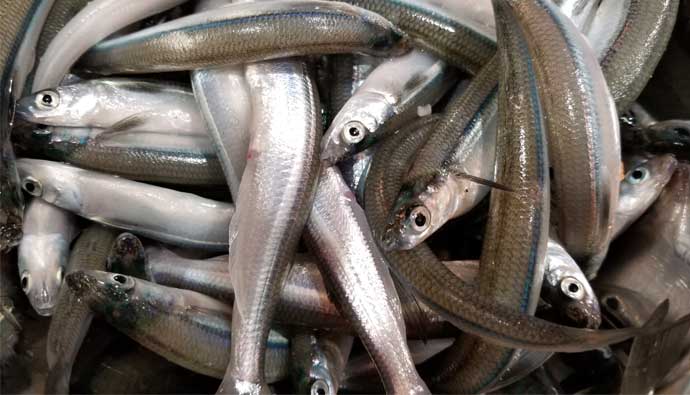 California Grunions are a fun fish to catch here in California.

If you’ve never seen a grunion run, just imagine a bunch of fish on the beach mating.

Unlike most people, I was exposed to the infamous Grunion Run later in life. Most people I talk to are first exposed when they are kids, running up and down the beach trying to grab before they make it back to the ocean.

There’s no reason you can’t have the same fun as an adult!

In this article, we’ll cover grunion facts, how to catch them, and how to turn them into delicious tacos.

Grunion season runs from March to September, with April and May being observational only.

They occur during the grunion spawn. This usually happens for three or four nights after a full or new moon and for only one to three hours after high tide.

Where to Catch California Grunion

You’ll be able to find grunion on beaches that are sandy with a gradual slope. They range from Baja to San Fransico.

They are most abundant between Baja and Pt. Conception. They are a schooling fish that tends not to migrate vast distance but is rather a home-body.

There are too many spots to name, but if you’re looking for grunion, it’s best to find a beach near you that has the right characteristics for them to night spawn.

This means relatively flat sandbanks and soft sand. I’ve gone out to places where I thought there should be grunion only to be skunked. When I drove down a mile to a better section of the beach, they were everywhere.

If you can’t find them, move to a new location!

Here are some areas that seem to have a lot of grunions:

Here’s how the process unfolds:

A female will do this ritual a few times a season (between four and eight). It’s estimated that she’ll lay between one thousand and three thousand eggs per season.

California grunion fishing is interesting in that you’re required by law to catch them with your hands.

That means no nets, tools, or traps (like digging a huge hole or fence in the sand).

How to Catch Grunion

It can be hard to grab them with your hand if you’re just going for their body.

To make it easier, try grabbing a handful of sand when you grab them. It tends to put pressure down on their body, pinning them to the sand and gives you a better grip. Throw it in your bucket or fishing cooler and catch more.

You’ll just have to strain out the sand and home or before you leave.

I’ve heard about grunion tacos back in college, but it wasn’t until recently I decided to try it…

I’ve been missing out!

Before we hop into that recipe, let’s clean them.

How to Clean Grunion

The FASTEST Way to Clean Grunion ?!?!

The easiest way to clean grunion is to buy a pair of shears (scissors work too).

How to Cook Grunion

Another option is to just add some soy sauce or Maggie to non-battered fried grunion. Throw them over rice or vegetables and you got yourself some good clean eats right there!

Johanes Godoy
Fishing Editor
Did this article help you? Yes No
× Why not?