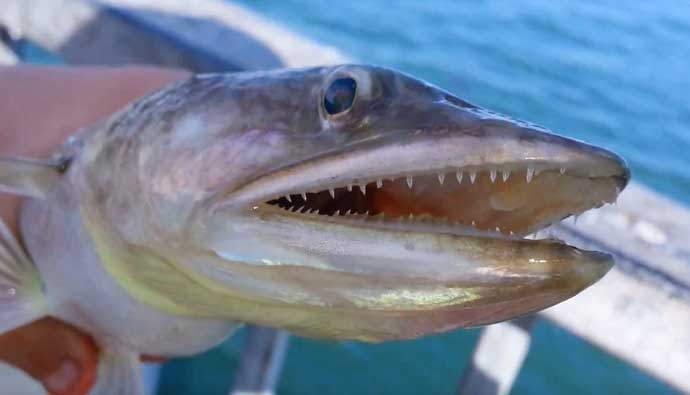 When I first saw the lizardfish I was shocked!

How could it look just like our reptilian friends?

Called ‘grinners’ because of their toothy appearance. The lizardfish belongs to the Synodontidae family and is a bottom-dwelling estuarine fish. The fish is generally small but some species can grow to two feet in length.

It has a long and cylindrical body that seems permanently rigid. Just try and pick one up by the tail out of the water. The fish will remain stiff and will extend straight out from your hand. The fish has pelvic and pectoral fins below the body and dorsal and adipose ones above it.

The colors can range from greenish to cream to red, blue, and turquoise, depending on the species. It is quite spotted or mottled, much like its reptilian namesake.

True lizardfish live in shallow, coastal waters all across the globe. Even those that live in the deep waters can be found no more than 1300 feet under the surface. There are over 60 odd species of lizardfish, and 8 of those live in the Gulf of Mexico.

It mainly feeds on smaller fishes and invertebrates.

The lizardfish can be found both inshore and offshore, depending on the species. The offshore one is smaller and can be found in the Bahamas, Florida, and the Caribbean, while the inshore lizardfish variety is coastal and larger.

Generally, the lizardfish is benthic, which means that it prefers shallow water and coastal waters. Some species, such as the harpadontinae can be found in brackish estuaries. This fish prefers sandy environments that can help it camouflage itself.

How to Catch California Lizardfish

Lizardfish are not popular with sport fishermen. That’s because it has the annoying tendency of attacking bait that is meant for other fish. If you are fishing for lizardfish, you need to keep the bait moving to attract them. Popular bait includes squid, pile worms, and Sabikis, which you should cut up into small strips before using.

The fish is caught by anglers when they are fishing for other species since it hits almost any lizard fish bait that is used. In fact, it is used as bait itself to catch halibut and other fish that mimics this species of fish.

The lizardfish can be caught throughout the year, but they are abundant during the spawning season. Peak spawning activity takes place between March and June in the southern Gulf of Mexico.

Deep-sea lizardfish do not build nests, and neither do they guard their young. Females drop eggs near the reefs at about 100 feet below the surface of the water, and males fertilize them by following behind.

Of course, you don’t have to target this season if you want to fill your bag with this fish. If you are fishing for flounder or halibut, chances are you will catch more lizardfish than the actual fish you are looking for.

How to Clean Lizardfish

Now that you’ve cleaned your lizard fishes, it’s time to cook them.

Most people often ask, “can you eat lizard fish?” Yes, you can, and the meat is mild and is flaky when it is cooked.

How do lizardfish hunt for prey?

The fish lies in wait and will sometimes remain buried in the sand with only its eyes exposed, waiting for unsuspecting prey to come near. Some hide under rocks and coral heads and dart upwards and to the side to catch prey. It moves so fast that it is almost invisible when it strikes.

Where can lizardfish be found?

You can find small 4-inch lizardfish in shallow and sandy beach areas, while adults or larger ones can be found over mud, sand, and oyster reefs. They stay away from areas that have high levels of activity.

What does Synodus foetens mean?

Synodus foetens is the scientific name of inshore lizardfish. ‘Syn’ means symphysis or grown together, ‘odous’ means teeth which is what the fish is all about (it even has teeth on its tongue!), and ‘foetens’ means stinky because the fish emits a fetid stench when it decomposes.

What happens to baby lizardfish?

Once the eggs hatch, transparent lizardfish larvae float in the water columns and are eaten by predators. Unlike most dioeciously fish (fish that are divided into males and females), lizardfish parents do not stick around to guard their young.
Those that survive are carried to estuaries by currents, at which point they are big enough to become bottom dwellers and increase their chances of survival.

Is the lizard fish poisonous?

The lizardfish may not be the prettiest fish out there, but you are missing out if you use it for bait. The pure white meat is quite delicious if it is cleaned and cooked well.

This fish can be caught even if you are not angling for it but share fishing tips and strategies that worked for you. Plus, do share this guide as well if you liked it.