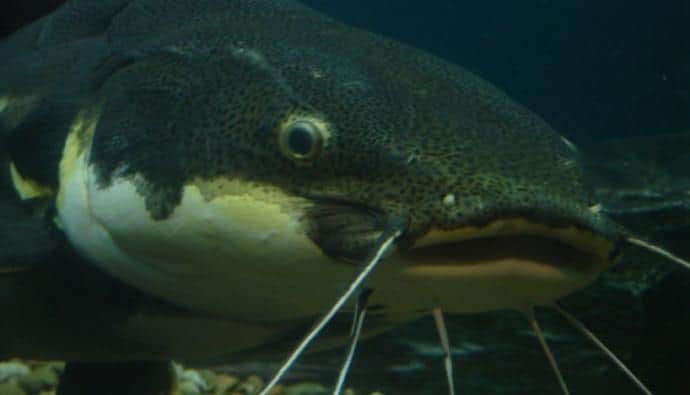 Some people claim that catfish whiskers sting. But how true is that?

The truth is that although catfish whiskers look scary, they do not sting. So, does that mean catfish are harmless? Not at all!

Catfish can sting, but not with their whiskers. Instead, they sting with their pectoral and dorsal spines.

This article will guide you on the safest way to hold a catfish without getting stung. We will also share more catfishing tips.

What Kind of Catfish Can Sting You?

There are many catfish species, and all of them can sting using the dorsal and pectoral fins. However, the younger catfish under 3lbs are more toxic than the older ones. They have razor-sharp, pointed fins capable of cutting deep into your skin.

How Do Catfish Sting?

Catfish are not aggressive. So you may wonder, how do they sting?

Well, catfish use dorsal and pectoral fins as a defense mechanism. There are so many fish predators in the water. For this reason, catfish straighten their spiny fins to avoid getting swallowed from the tail.

When you hold a catfish, it senses danger. It assumes that you are a predator ready to swallow it. As a result, the fish extends and locks its fins, then shakes violently from side to side.

It does so in an attempt to free itself; therefore, how you hold a catfish matters.

How Painful Is a Catfish Sting?

Many anglers can attest that a catfish sting is a very painful injury.

The pain can last for minutes, hours, or months depending on how deep the spines penetrated the skin. Nevertheless, the main issue is not the pain. It is the secondary infection that results from the injury.

Which Is the Most Common Site for Catfish Stings?

Catfish mainly sting the hand. This happens because hands are more exposed when handling the fish.

If you get a sting, ensure that you seek immediate medical attention to avert potential health complications.

Can a Catfish Bite You?

Catfish cannot bite. Their teeth are not for capturing prey.

They have small, crooked teeth in the mouth, making it difficult for them to bite someone. However, this does not mean that the teeth are entirely harmless.

Catfish have some rows of teeth that are sharp and can easily hurt you when noodling for them. For this reason, keeping your hands off the mouths of big fish is advisable.

Many catfish species have venom glands. According to the University of Michigan, their venom glands are along the edge of the pectoral and dorsal spine.

The spines can lock in when the catfish sees a potential predator or feels threatened. As a result, the membrane surrounding the venom gland tears.

If the spine strikes you, it releases the venom into the wound, causing mild to severe reactions such as:

When you get stung by these three fish:

The chances of getting a severe secondary infection are high. Seek immediate intervention by a professional medic.

How to Hold a Catfish?

Handling catfish depends on their size. We have small, medium, and large catfish.

You’ve got to be more careful with the smaller fish as they have very sharp spines. To avoid getting hurt, here is how to handle each fish category.

Small catfish can comfortably fit in your hand. They range between one to three pounds.

The best way to hold smaller cats is from the top. Position your hand directly behind the dorsal and pectoral spines.

Tip: Rest the area between your thumb and forefinger behind the dorsal fin and give it a firm grip.

These fish weigh between three and seven pounds.

Anglers prefer holding medium fish from the top, just like small catfish. The only difference is that they place their hand behind the pectoral fins and in front of the dorsal fin.

Most larger catfish weigh more than seven pounds. Despite their size, big catfish are less risky to handle than smaller catfish.

Their pectoral and dorsal fins are dull and can rarely strike you. However, this does not mean there is no challenge when handling larger fish.

These fish are too heavy and wide to get your hands around. Therefore, the best way to handle them is using a lip grip.

After scooping them up with a dip net, use the lip grip technique to handle them during landing, live release, or photography.

Caution: The mouths of giant catfish are more dangerous than their fins and spines. So, be careful not to stick your hand in the fish’s mouth.

How to Release Catfish Safely Without Getting Stung

When releasing a small catfish, it is best to drop it out of your hand and into the water. Simply open your hand and release the fish quickly.

Never throw a small catfish. Doing so can cause the sharp catfish spines to slice your fingers.

Releasing a larger fish can be more challenging, especially if it has a hook inside the jaw. In such a case, wear a thick rubber glove to protect your hand while unhooking the fish. Then, hold a catfish by the jaw and drop it into the water.

How to Treat a Catfish Sting

What are you supposed to do if a catfish spine stings you?

Besides the venom, catfish have a bacteria-rich slime coating on the dorsal spine. When it gets into the wound, the risk of infection is guaranteed.

There are two ways of treating a sting wound. The first is from an angler’s experience, and the second is the doctor’s recommendation.

How Anglers Prefer to Treat a Catfish Sting

Immediately you get finned, rub puncture the wound on the fish belly for ten to fifteen seconds. The pain will cease instantly.

Caution: Although this method has worked for others, it is a bad idea. It is not 100% safe and can cause serious infections later on.

All catfish can sting. The small catfish have sharper spines than the older ones. Therefore, you need to be extra careful when you hold a catfish.

Catfish do not attack with their whiskers or mouth but with their pectoral and dorsal fins. The whiskers are harmless sensory organs.

A firm grip on the spine is the secret to not getting stung by a catfish. Also, a rapid drop when releasing the fish will save you from being stung.

There is nothing as painful as getting stung by fish spines. If it happens, soak the wound in warm water to curb the pain. Then, see your doctor for recommendations on how to treat the infection.