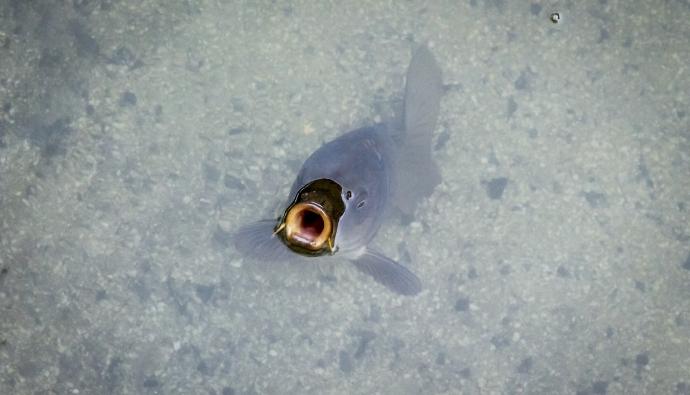 Can fish drown? It’s a question that has perplexed philosophers and ichthyologists for centuries. After all, fish live in water, so how could they possibly drown in it?

And yet, the answer is both simple and complicated.

To understand how and why fish can drown, we need to look at their anatomy and physiology. Fish are unique creatures, adapted to live in an aquatic environment in a way that humans are not.

And as a result, they face different challenges – including the risk of drowning.

So, can fish drown? The answer is yes – even betta fish can, but it’s a bit more complicated than that. Read on to find out more.

Yes, fish can drown if they cannot get oxygen through their gills. If a fish is put into water that is too deep for it, or if the water has low dissolved oxygen levels, the fish will suffocate and die. Some fish, such as catfish and certain types of carp, can breathe air and will often come to the surface to gulp in a lungful of air.

However, most fish cannot do this and must have water flowing over their gills to extract dissolved oxygen. If there are too many fish trapped in a stagnant pond or aquarium with no aeration, the fish suffocate and die.

It is essential to have an aerator in your fish tank or pond. While fish cannot drown in the traditional sense, they can suffocate or be trapped underwater and die. Fish also need oxygen to help them digest their food.

If a fish does not have enough oxygen, it will not be able to digest its food properly and can die from malnutrition.

So, while fish can technically drown, it is not a common occurrence. Most fish die from other causes, such as disease, starvation, or being caught by predators.

Fish need oxygen to live, and they can drown if they don’t have enough of it. Fish get oxygen from the water around them using their gills.

But there is less dissolved oxygen in warm waters as the gases easily escape, but cold water holds more oxygen. When a fish is removed from the water, it suffocates and dies because it can no longer get its oxygen.

It’s pretty difficult to drown a fish on purpose. If a fish is kept in a water container and seal it shut, it will die of suffocation long before it runs out of oxygen. The same thing would happen if you put a fish in a sealed air container – it would suffocate.

So, how do fish drown in the wild? It usually happens when there is a sudden decrease in oxygen in the water, such as during a red tide. Fish can also drown if trapped in an enclosed space with no water, like a fishbowl or aquarium.

If the water in these vessels is not regularly refreshed, the dissolved oxygen levels will eventually drop to the point where the fish will suffocate. Fish can also drown if they become trapped in fast-moving water, such as a whirlpool or waterfall.

The force of the water can prevent them from getting oxygen, and they will eventually die. However, if you are keeping fish as pets, it is essential to ensure they have enough oxygen by regularly changing the water in their aquarium or bowl.

Anatomy of a Fish

To understand how fish breathe, we must first look at their anatomy. Fish have a unique respiratory system that is quite different from our own. Fish breath using something called countercurrent exchange.

The fish breathe through their mouth and adjust the pressure that forces the water over their gills. The gills are lined with thin filaments that have a large surface area. This allows a large amount of dissolved oxygen to be absorbed into the blood.

When fish are taken out of the water, they can no longer breathe and eventually suffocate. This is because they rely on the pressure of the water to force the water over their gills.

When they are taken out of the water, that pressure is no longer there, and they can no longer breathe.

Fish also have a unique circulatory system. Their hearts are located near their tails, and they have two chambers. The first chamber pumps blood to the gills, where it picks up oxygen. The second chamber then pumps the blood to the rest of the body.

How Do Fish Gills Work?

Fish breathe using their gills. Gills are thin, feathery structures located on either side of a fish’s head, just behind the eyes. Each gill is made up of many filamentous structures called lamellae.

The lamellae are covered in tiny blood vessels that absorb oxygen and transport it to the fish’s bloodstream. After inhaling water, fish gills extract oxygen from the water efficiently, but they have one big drawback; they can only work in water.

If a fish is out of the water for even a short period, its gills will dry out, and the blood vessels will collapse. This quickly leads to suffocation and death.

How Do Fish Drown Underwater?

It might seem impossible for a fish to drown since they live aquatic life. But just like people, fish require oxygen to survive. When the water around a fish have less oxygen levels, the fish will suffocate and drown.

This can happen in stagnant water that doesn’t have a lot of movement to circulate oxygen. It can also occur in deep water where the oxygen hasn’t had a chance to reach. Fish can also drown if they are pulled out of the water and not put back in quickly enough.

The fish’s gills need to be constantly moistened by water to function correctly. While it might seem impossible for a fish to do, they can drown in water just like people if the conditions are right.

How long can a fish stay underwater? Days, weeks, months, years? We know that fish live in water, so it stands to reason that they can hold their breath for a long time, right?

Wrong. As it turns out, fish cannot stay underwater forever. Fish need to surface periodically to breathe air. So, how long can a fish stay underwater? It depends on the species of fish. Some fish, like the lungfish, can stay submerged for months or even years.

It all has to do with how the fish are built. Fish that can stay underwater for long periods have a special type of lung called pseudo-lung.

This pseudo-lung allows the fish to extract oxygen from the water and store it in their bodies. Other fish, like the betta fish, don’t have a pseudo-lung.

Instead, they have a unique organ known as a labyrinth organ, mainly found in freshwater fish and many aquarium fish. This organ allows the labyrinth fish, like the goldfish, to take in oxygen directly from the water.

However, labyrinth organs are not as efficient as the pseudo-lung, and so the goldfish can only stay underwater for a few days before they need to surface to take as much oxygen. So, there you have it. Fish cannot stay underwater forever.

They have to surface occasionally to breathe air. How often they need to go to the surface will depend on the fish species and how much dissolved oxygen they can extract from the water.

Fish can drown. But it’s not as simple as that. Fish need water to breathe, and if they are deprived of oxygen for too long, they will suffocate and die.

However, some fish can survive in environments with low oxygen concentration and even out of water for short periods.

So, it depends on the species of fish and the conditions. If you’re worried about your fish drowning, make sure to provide them with a good environment with plenty of oxygenated water.

YouTube
Articles » Freshwater Fishing » Can Fish Drown? What You Need To Know!