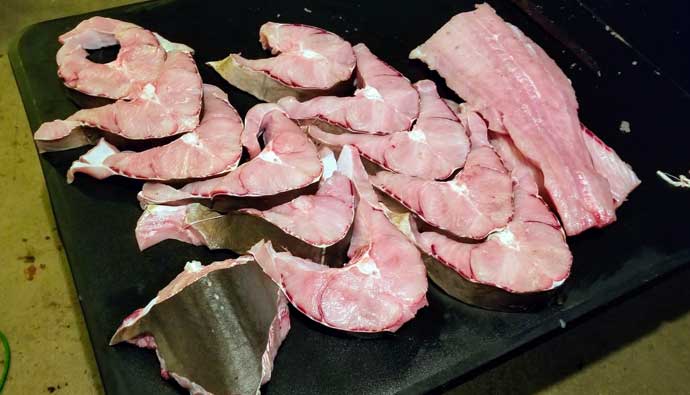 I’ve had a fascination with sharks my entire life. I grew up with a massive shark poster on my wall where I memorized the names and dreamed about swimming with them without a cage.

Therefore, I had some reservations when I learned that some sharks are tasty. As a spearfisherman, the whole karma thing can make dives unnerving. Maybe it’s also all those seasons of Shark Week I watched as a kid.

My First Shark Catch and Cook

First, I despise the practice of shark finning for shark fin soup. I think it’s cruel and wasteful and should be banned, and those who are caught face stiff life-changing punishments.

I’m for the lawful take of an animal if you use all parts of it. Eating and/or sharing the bounty with friends and family is a good start.

Putting the non-consumable bits in a garden or a way for the nutrients to go back into the system is even better.

Last year I decided to try catching a soupfin in La Jolla, California, in the United States with the Coach, but primarily for catching and releasing.

After a few hours, we hooked up on one using a small wire leader and a chunk of bonito. This was exciting because earlier, we had another hookup only to have the soupfin’s tail break off our line a few seconds into the first run.

After about fifteen minutes and fighting it up and down the beach, we got it to shore. That’s where we saw it rolling in the sand.

This was unfortunate because the sand cut up the gills and had them bleeding. Not every fish you throwback has a high probability of survival.

That’s why it’s essential to look at the signs of the fish, whether it’s over-stressed, bleeding, or hurt, to know when it’s better to take it home than release it (where lawful).

We knew our soupfin wouldn’t make it if we tried to release it. Therefore, we knew that to do right by the shark; we’d need to prepare it for human consumption.

Sharks excrete urea through their flesh. This is a primary reason people don’t like eating shark meat because when ill-prepared, it leads to an ammonia odor and flavor that no one would enjoy.

To increase the quality of your shark meat, you first need to bleed and soak it in saltwater. Therefore, we first cut the gills and cut a deep gash on both sides of the tail.

We then put the shark in a tide pool deep enough to cover the shark and waited for an hour.

After an hour, it was time to carry the shark to the car and put it into a cooler to take home and start the at-home process of cleaning the shark.

Once home, it was time to remove the entrails and head. To make it easier, we hoisted the shark’s tail with a rope and let it hang. We then took a fillet knife, cut down the shark’s belly, and let the guts fall into a bucket. After that, we removed the head and shark fins and let the moisture drain out of the shark.

We waited for over an hour, and you could see the skin pull tight against the muscle. You can let it hang for longer as it should help improve the meat quality, but we were doing this late at night and were tired.

Once the shark was ready to be steaked and filleted, we took down the hanging shark and placed it on a table.

We got the fillet knife nice and sharp and cut the main body into 2-inch thick steaks. We performed a standard fillet-cutting method when we got closer to the tail.

Some people recommend soaking the meat in milk after you fillet, but we didn’t find that necessary if you let the shark soak in saltwater before bringing it home.

We placed the steaks and fillets into vacuum-sealed bags to save them. Using a vacuum sealer removes the air around the shark meat, reducing the chance of spoiling.

This is nice if you want to freeze the meat or give it to friends.

Levels of Mercury in Shark Meat

Like any predatory fish, the levels of mercury are going to be high compared to smaller fish like sardines and anchovies. Shark meat is no different. Therefore it’s essential to watch your consumption to reduce your mercury intake.

High levels of mercury can lead to different neuro-diseases, so it’s essential to read up on the published scientific literature and follow health guidelines. Getting tested for mercury can also be beneficial if you eat fish consistently.

I eat sharks no more than a few times a year, depending on the situation. It’s not a fish that should be eaten consistently.

This Harvard article also states that eating sharks, swordfish, and other large fish is likely more harmful than beneficial. 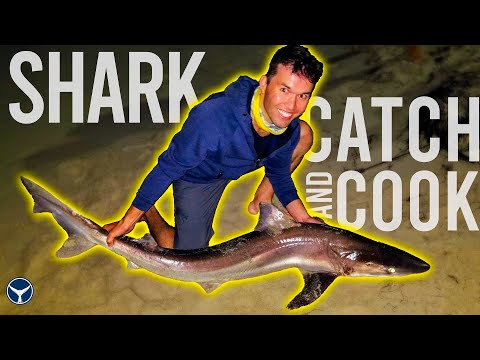 Which Sharks Are Good to Eat?

After talking with Coach, he ranks the taste of sharks as follows:

I’ve personally eaten a soupfin shark and found it surprising. It has the texture of a steak and a delicate flavor that’s not overpowering. It made one heck of a burrito.

Is shark meat poisonous to humans?

Shark meat is high in mercury, which can cause problems if eaten in high quantities.

How does shark meat taste?

Soupfin shark has the texture of steak and a light flavor. It holds a marinade or spice mix well.

What types of sharks are good to eat?

Soupfin, mako, thresher, and leopard sharks. Requiem sharks and Angel sharks have some of the best reputations on the plate.

YouTube
Articles » Saltwater Fishing » Can You Eat Shark Meat? (Here’s Why It Can Be Dangerous)