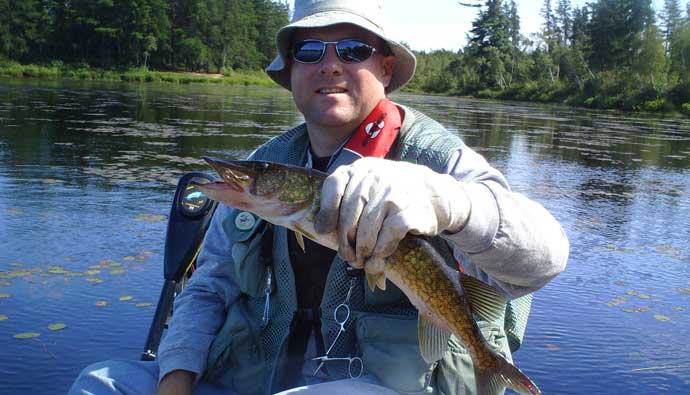 Chain Pickerel are some of the tastiest and best fighting freshwater fish, that is if you can stand the teeth!

These fish can be found in most creeks and bodies of water of eastern North America from Miami all the way up to the southern reaches of Canada. They are often referred to as the “Southern Pike”, “Grass Pike”, and “Jack Fish.”

These fish physically resemble Northern Pike except having a few small differences in coloration. They can be distinguished by the dark chain-like pattern on their green sides as well as a dark black stripe running vertically on their heads below and above their eyes.

They usually act similar to Northern Pike, referring to their actions and hunting methods. These fish rarely get above twenty-four inches as well as weighing three pounds.

Chain Pickerel are predatory fish, which means they mainly feast on small fish, that is until they get large enough to prey and much larger fish by ambushing them and trapping them with their teeth.

Jack fish are also known to feast on mice, frogs, worms, and pretty much anything else happens to cross their path.

These fish are even known to leap out of the air to catch flying insects as well as dangling fishing lures!

Chain Pickerel are often fairly easy to catch and tend to stay in grass and heavy cover.  This way they are hidden and ready to ambush any unsuspecting fish that happens to pass by.

Usually, I tend to stick to power fishing when targeting pickerel.

The baits I throw are typically crankbaits, rattletraps, chatter baits, and topwater lures.

Pickerel are usually reactive when they are feeding, unlike bass and crappie that go out and hunt for prey.

Freshwater jack fish will sit and wait for something to swim by, giving an angler the opportunity to quickly retrieve a bait by a patch of grass and cause the pickerel to quickly react to the presentation and strike.

Pickerel are a thousand times faster than bass and crappie, their long slender bodies help them glide through the water and catch up to most any retrieve.

Small flashy lures such as Rooster Tails and spoons work wonders on these fish as they imitate small minnows which are the main forage for Pickerel.

When it comes to topwater lures, pretty much anything will catch a pickerel as they generally get irritated easily.

Enticing strikes from chain pickerel when using topwater plugs is simple by creating a large amount of water dispersion, noise, and action then followed by long pauses usually creates massive blow ups with the fish flying through the air with the lure in their mouths!

How to Clean Pickerel Fish

Can You Eat Pickerel?

Freshwater jackfish are good fish to eat. Their meat is lean and flaky. Although the meat is good, these fish are bony.

They can be difficult to clean without getting bones into the filets.

How to Cook Chain Pickerel

Q: Where are chain pickerel found?

A: Chain pickerel can be found in almost any freshwater lake or creek, because of the low predator threat, they easily thrive.

A: Yes. They have sharp teeth that it is a good idea to be aware of before removing hooks or lures.

Q: Do you need special tackle to fish for chain pickerel?

A: Not especially. It is a good idea to use a leader if you are going specifically for chain pickerel. They do have sharp teeth that can slice right through the line.

A: There are some that agree chain pickerel are an invasive species as they have a low predatory threat to their numbers in the areas they live in. However, this is still up for discussion.

A: They can be. They are most definitely fun to catch.

I enjoy catching them as they are something different and tend to fight much harder and longer than most bass.

Go out and look for the swampiest grassiest creek or lake and throw some spinners out. You never know what you might pull up!