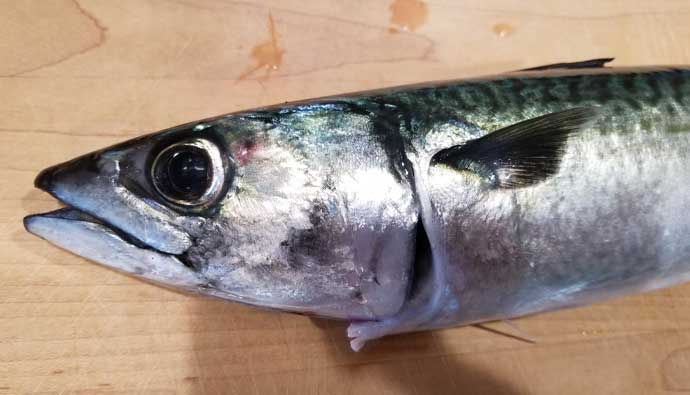 Don’t be scared, give chub mackerel a try!

Chub mackerel are easy to catch and much of what we wrote in our Spanish mackerel guide applies to this fish.

Since our other guide talks more about catching these mackerel with a Sabiki rig, we’ll focus this guide on using lighter outfits to play with these fish a bit more before bringing them in.

How to Catch Chub Mackerel

They actually fight really well on light tackle. They are a schooling type fish and many locals fishing from boats and piers keep these fish to eat.

In British Columbia, they are actually invasive and have been one of the reasons for the declining salmon population, so if you’re up in that area, don’t throw them back. They actually come up from the southern waters because of the warm current and they pretty much eat all the salmon fry.

I’ve seen anglers catch these on a little rooster tail. It’s a primarily freshwater fishing lure and it works great. They just go crazy over them and work on the light road as well.

These fish are fast. Most of them are around a foot long, but sometimes you get lucky and can catch some bigger ones.

Here’s a list of baits and lures that I’ve caught these fish on:

How to Clean Chub Mackerel

Most of the time you’ll catch these fish while you’re trying for other species. To anglers on party boats, these will be looked at more as a nuisance than a fish to target.

This really is an awesome fish. This fish doesn’t get the credit it deserves. It’s cheap to buy, easy to catch, it’s flavorful (although some don’t like the taste). It’s an oily fish that’s full of omega-3 healthy fats. It’s good for you fish. Let’s take the fish that you’ve just caught and taken the fillets off, pan fry it, and serve it with some pickled beetroot salad.

First, start by making an incision around to the head without going through the backbone. Once you’ve joined the two head cuts, pull the head off and you’ll get most of the guts out in one go.

It’s a handy trick for small fish like these.

Next, we need to take the fillets off. Put your knife along the backbone where the head used to be and cut all the way down to the tail. Remove that fillet, flip the fish over and doing it to the other side.

We haven’t finished yet.

You’ll need to take out the bones down the lateral lines. You’ll this with the knife making a V-cut down the center of the fillet. The bones will then come out as one solid unit. Do this to the other fillet and you’ll be left with two boneless fillets ready for the pan.

According to some of my English friends, they recommend pairing a mackerel with something that has sweet tartness because it’s just quite an oily fish. That paired flavor cuts through that fattiness.

Now that we have our fillets, it’s time to throw them on the heat.

Get your pan nice and hot.

If you have large fillets, don’t be afraid to cut them in half so you can share with your friends. Rub some olive oil on the skin side of the fish and add a little salt.

Once you put the fish in the pan skin side down, the key thing to remember is don’t fickle with the fish. Don’t move them, barely touch them so they cook and get a nice crisp skin. We’ll cook these three-quarters of the way done on the skin side then turn over for that last couple of minutes to finish up.

Press Your Fillets Down

Once your pan is nice and hot, put your fillets in skin side down. Use your hand to put a little bit of pressure on the fillets to increase the surface contact of the skin on the pan. If the fish puff up you know it’s fresh. It should be fresh because you caught it the day of :).

After a few minutes, flip the fillets over and cook the other side.

Plate the fish and it’s ready to eat. If you’d like, pair it with a pickled beetroot salad. Here’s a simple recipe to try out, which could be made the day before you cook your chub mackerel.

The chub mackerel isn’t commonly known as an eating fish in all circles and some people either love them or hate them. Having caught a few large ones myself and ate them, I’d have to say I’m a fan.

They are full of healthy omega-3 oils, they aren’t overly fished to the point that you should be concerned and you can eat up to 4 servings per week in Southern California.

Overall, this is a great staple fish to eat on the regular.