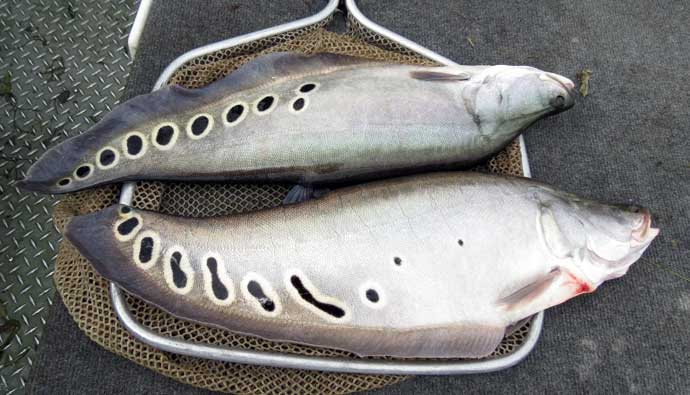 The clown knifefish chitala ornata is one of the most uniquely-shaped freshwater fish out there.

It has a beautiful silver color with a few black spots near the tail. The crazy part is, it looks like a ribbon!

This unique shape allows it to swim forward and backward giving fishermen a double-take as they are reeling it in.

Not generally a fish you target for food, but some anglers have been giving it a shot.

Use this guide to catch yourself a big one and if you’re so inclined, fillet it up and give it a shot.

Also known as the clown featherback and spotted knifefish, this fish species can be found in tropical waters and usually ventures out at night only. It lives in freshwater habitats in Thailand, Vietnam, Laos, and Cambodia but it can also be found in other regions.

The shape of this fish is quite distinct. It has a humpbacked and elongated body that is flattened from the sides and it is a silvery gray in color.

This freshwater fish also has a row of 6 to 15 round dark spots with white borders along its body and a tiny dorsal fin that looks like a feather more than a fin. In the wild, it can reach up to 1 m in length but, in a tank, it rarely grows more than 20 inches long.

These fish can be found swimming in river backwaters, lakes and swamps. Young clown knifefish chitala ornata remain in schools in aquatic plants as well as submerged roots while adults swim alone near the shore in areas that have overhanging branches or docks.

How to Catch Clown Knife Fish

This fish is a light tackle species so you can use ones that are typically used for largemouth bass. A medium action rod will work along with a 20 lb monofilament leader. The clown knifefish will take both baits and lures but the former is more effective than the latter especially crankbaits.

You can use both live and dead bait to lure this fish to the hook but make sure it mimics its main diet such as shad and worms. However, you can also use prawns, live shrimp, and small fish strips. If you are targeting the giant variety, using shrimp patterns can increase your chances of catching one.

They are cautious feeders and will drop bait they feel is resisting.

The clown knifefish and especially the giant featherback spawn at the start of the rainy season from May to June in flooded and grassy areas which makes them prime fishing spots.

In some areas, it spawns if there are 3 days of continuous rain which are common in June at which time they seek shelter in water hyacinths.

Clown fish are commonly found on menus in Thailand and other southeast Asian countries. Generally, you can find this fish deep-fried in a dish called Pla krai thot krathiam, which is served with a delicious spicy sauce. Also, since the clown knifefish has mushy flesh and lots of bones, it actually makes a great fish ball type dish.

Here’s an easy starter clown knifefish recipe for you to try. 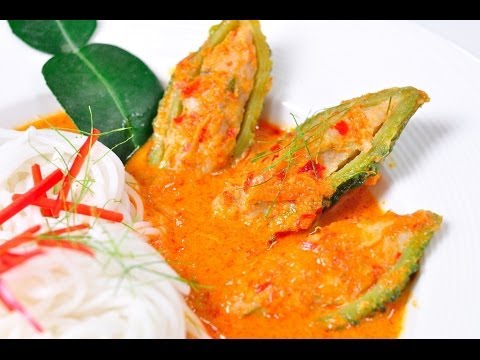 There are a few videos on YouTube where fishermen are doing Catch and Cook style videos and trying this fish by pan-frying it. The meat of this fish doesn’t bode well for that style of cooking and it should be done using the traditional Thai method shown in the video above.

Q: Why is the clown knifefish an invasive fish in Florida?

A: Likely yes as it’s a popular fish with a native range in Asia. Since it’s a popular aquarium fish, it could have been brought into South Florida and other parts when people release them. It is unclear which waterways brought this fish species into Florida when it lives somewhere else.

A: The clown knifefish can live up to 10 years.

Q: Can you eat clown knifefish?

A: Yes. It’s a popular fish commonly eaten in Thailand and other parts of Asia.

Clown featherback may look strange but the giant variety can give you a run for your money during a fishing trip.

The fish is known for being a jumper and will start struggling as soon as it is out of the water so you better take that picture fast. The smaller varieties are either used as bait or are placed in aquariums.

Although Florida doesn’t seem to be their native range, they are a fun fish to catch!