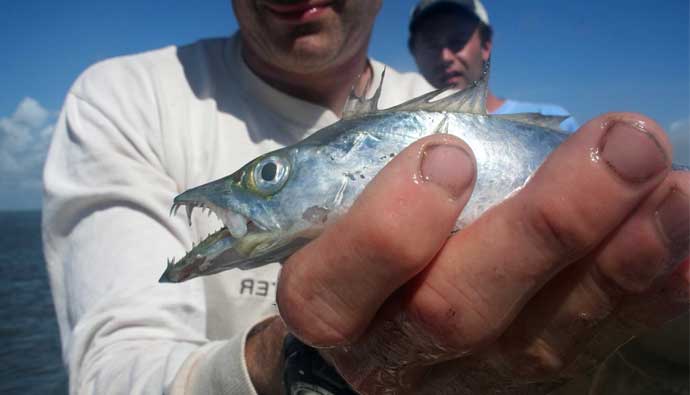 Want to catch a cutlassfish but don’t know how?

We’ve put together this Atlantic cutlassfish guide to help you!

The cutlassfish (or cutlass fish) may be funny looking but it can be difficult to catch. Let’s figure out how to make it easier for you.

There are over 45 species of cutlassfish across the globe but they share similar features. It is a predatory fish that is long, slender and is usually steely blue or silver in color thus the name. Most don’t have pelvic and caudal fins, a feature that gives them an eel-like appearance.

It is also the reason why they are also called ribbonfish. The large head hairtail fish or beltfish are semi-transparent and are silvery steel blue in color.

Some cutlass fish are also called silver eels, scabbardfish, hairtail fish, ribbonfish, and frost fish depending on their location and the seasons they emerge in. The fish are in the Indian, Atlantic, and Pacific oceans where they feed on other fish.

Atlantic cutlass fish swims 50 to 500m in tropical and temperate marine waters around the Gulf of Mexico, the West Indies, and the US South Atlantic coast. They can also be found in coastal waters across the globe.

In the daytime, juveniles and small adult Atlantic cutlassfish congregate in schools in the depths. At night they gather in large numbers in coastal areas, bays, and estuaries. Most are along muddy bottoms in the shallow coastal waters.

Atlantic cutlassfish are not sought after by anglers and are used as bait to catch larger fish such as wahoo, Spanish mackerel, and king mackerel. Yet, if you are angling for some for the same purpose you can attract a school using shrimp, small fish as ribbon fish bait or artificial lures. The fish feeds in a vertical position (tail down and pointed snout up) and floats under the surface, always ready to strike.

If you are using this fish as bait, use a simple nose hook rig complete with 3 or 4 treble hooks. You can also use a jig for the nose hook to keep the fish upright in the water and prevent it from spinning. Otherwise, the fish will not look natural and will not attract strikes.

Adult Atlantic cutlassfish move to warm waters northwards to feed, while females spawn during the spring and summer. Their larva are usually on shelves and slopes.

Juveniles can be found in coastal waters while young adults remain on the shelf break during thermal fronts. The fish goes into a feeding frenzy during the wet season when the number of crustaceans and shrimp increases.

How to Cook Cutlass Fish

Cutlass fish are marketed fresh and sold commercially in abundance. Commercial fishermen love fishing for these. If you want a taste of this fish, here’s a simple recipe to try.

Can you eat ribbon fish?

Atlantic cutlassfish is sold as live bait for anglers and isn’t a primary food fish in the US. But, it is considered a delicacy in Japan where it is eaten dried.

Is ribbon fish good to eat?

The taste of this fish is a cross between flounder and sea trout. The texture is delicate and the meat is white and flaky.

Does the cutlass fish have scales?

The fish has no scales. Its long and tapering body is covered with shiny and metallic silver skin.

Make sure that you catch many Atlantic cutlassfish if you plan on using them as bait. You can always cook the ones you don’t use so your efforts aren’t wasted.

Share your fishing strategies and tips in the comments below and do share this Atlantic cutlassfish guide if you liked it.