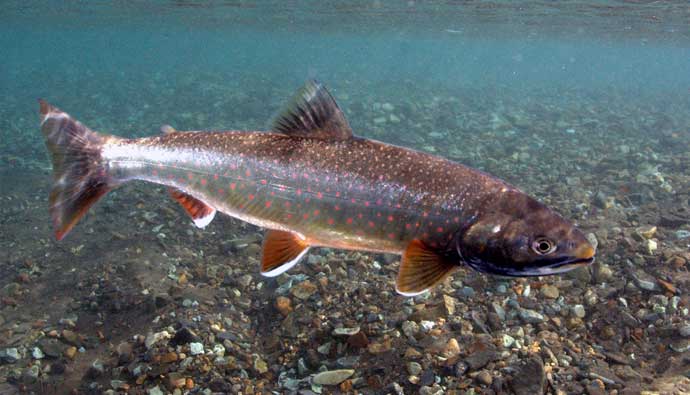 What looks like a trout but is actually a char?

Dolly Varden trout! They are a robust fish that is as gorgeous as it is a prize catch. Find out interesting facts and fishing strategies for this char right here.

Be sure to check out our other trout fishing tips as well!

Often confused with trout, the Dolly Varden fish has light spots which are white, yellow or red on a dark body. The back and sides of this fish are often gray or a mud green in color and the fins are plain except for a few light spots that are present on the caudal fin.

It is often compared specifically to the endangered bull trout because of its striking similarity with the fish.

Dolly fish are true chars that range from Puget Sound north around the coast of Alaska all the way to the McKenzie River in Canada. The average dolly can reach 16 to 22 inches in size and generally weigh between one and four lbs in weight.

Dolly Vardens remain in freshwater sources such as streams which are less than a meter wide in summer. They can be found half a meter below the surface and remain at the bottom half of water columns in deeper water columns.

Yet, they can also be found in marine shorelines, brackish estuaries, large rivers, and lakes.

For large numbers, look for the fish in streams that are abundant with wooden debris. This offers char protection from the current and cover for ambushing prey. The fishes migrate between fresh and saltwater year-round.

How to Catch Dolly Varden Trout 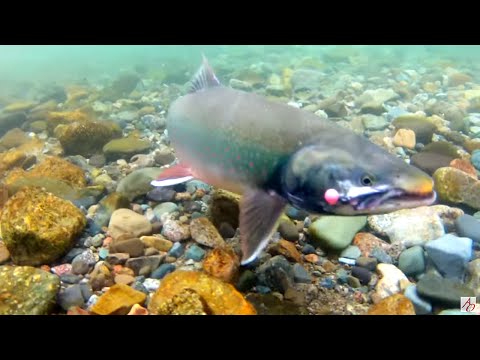 Dolly Vardens may look vicious but if you have experience catching rainbow trout, catching this char should not be difficult. The fish may leap out of the water to try and unhook itself and will put up a strong fight.

A light action spinning rod or a 5 or 6 weight fly rod should do the trick and use a monofilament 12 lb line to prevent the hook from getting pulled off.

The best Dolly Varden lures are small silver spinners and spoons especially when the char is on the hunt for juvenile salmon. The fish loves salmon eggs and will feed on any poorly buried roe it can find. That is the best bait to use during the peak salmon run when the fish is following the salmon.

Dolly Vardens are migratory so they can be found in a range of habitats. During the spring, they leave large lakes and head for near-shore saltwater sources for the summer months. There they swim with the salmon and follow the fish upstream to feed on their eggs.

During the spring and early summer, focus on the mouths of rivers and lake outlets to target migrating Dollies. Look for them downstream from the redd i.e. a hollow in riverbeds that salmon make to spawn in.

How to Clean Dolly Varden

Q: Why is it called a Dolly?

A: The name ‘Dolly Varden’ was originally given to the bull trout (Dolly Varden bull trout) that can be found in the McCloud River. The Dolly Varden trout were considered the same species till 1978 but the name stuck.

A: Dolly Varden’s taste is a cross between a salmon and a trout so any type of trout recipe will make this fish taste delicious.

Q: When do Dollies spawn?

A: This fish spawns every 3 to 4 years rather than every year.

Dolly Varden fish are notorious for being strong fighters and will make you work for that catch. Fish during the salmon run downstream from the redd and try out egg patterns to lure the fish.

It’s common to get into the bull trout vs dolly varden similarity debate. They are both chars but are different species.

If you have tips and strategies for catching this magnificent fish share in the comments below and do share this guide if you liked it.