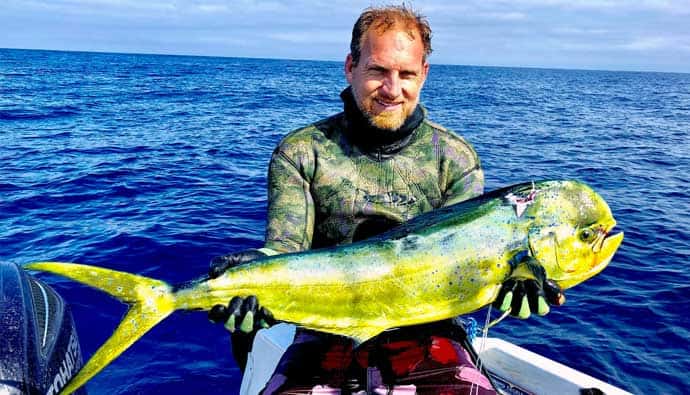 In this dorado fish guide, we’ll share our advice on how to catch these beautiful, tasty, and plentiful fish.

Dorado (sometimes called dolphinfish) is found in temperate, tropical, and subtropical waters across the globe from Baja California Sur to South America. We often get asked, why is mahi-mahi called dorado? In Hawaii, they’re called mahi mahi which translates to “very strong.” They are indeed fast-growing strong fish, most living no more than five years.

You’re about to learn how to catch coryphaena hippurus using traditional, trolling, and spearfishing tactics.

Note: The golden dorado (river tiger) is not the same fish as a dorado! It’s actually a freshwater fish that is becoming a popular fresh fish for anglers to catch on the coast of Central America, Africa, and the Pacific.

For more information about Dorado coryphaena hippurus, check out the NOAA.

Where Can You Find Dorado (Find The Flying Fish)?

Dolphin fish can be found in open waters, offshore, and near coastal areas.

They are found (sometimes year round) in circumglobal waters in tropical and temperate waters. In the water column, they tend to reside near the surface to the mid-column. You’ll usually see them near flotsams (floating objects) as they are hunting for small fish taking shelter.

They are a pelagic species found in the Pacific Oceans, Atlantic, Indian Ocean, and a host of other tropical waters, including near Costa Rica.

When fishermen go for sailfish, it’s not uncommon to see a few mahi mahi around.

Just type in “dorado Mexico or dorado Baja California Sur” in Google to see a plethora of mahi traveling in pairs or schools (it’s awesome when they chase flying fish). If you need a guide down in Cabo, go visit Pisces Sportfishing and tell them Jon sent you 🙂. Baja California Sur depending on the season is excellent mahi mahi fishing.

When they are on the surface they usually are looking for all forms of fish, zooplankton, crustaceans, and squids.

How to Catch Dorado

There are countless setups that will work for catching mahi, but to help point you in a direction, below are a few recommendations.

If you want to slay Dorado (coryphaena hippurus), then you’ll want to check out this gear.

The Ripper Team uses a 220lb Fluorocarbon Leader for their Ballyhoo rig. They use a spring and wire to keep the ballyhoo protected while trolling so you don’t have to switch out baits often. This could literally save you hours on your next trip!

Quality Lures Worth a Look

There are many methods for catching mahi mahi in the Pacific (Costa Rica is a hot spot). Some people like to troll for them, some people would rather be on a boat and do a good old-fashioned line of sight casting for mahi.

Recreational fishermen love mahi since they tend to bite anything.

It makes sense, they are traveling long distances looking for floating objects. In this structure, they’ll find bait fish and other creatures to munch on. If you can get your bait or lure near a floating structure, either by casting or trolling, you’ll have a good shot at a hook-up if they’re around.

On a side note, we’re not fans of commercial fishermen using purse seine fishing techniques where they wrangle in large schools of mahi and large by-catch rates (we like our sea turtles and other species).

This is where you drag a lure or bait behind a moving boat and wait for a fish to bite.

This method is effective for covering vast amounts of area to give you a high probability of a catch. Devices such as planer boards are often used to spread fishing lures away from the vessel. This allows for multiple lines to be trolled at once, increasing your odds of a catch.

Using lures is usually done between 7-15 knots depending on the fishing area, but can work at slower speeds, especially from a kayak.

Fish Caught, Now How To Cook?

There’s nothing better than a trip down to Baja California Sur chasing mahi to catch and cook with friends.

With the vast number of mahi recipes found online, you should know that the human consumption quality of this fish is sky-high. Since it’s a fast-growing pelagic species, the harmful toxins are relatively low in this fish. Especially, when you compare it to tuna or other larger species.

One large bull make can feed a large group of people.

Fish caught on hook and line should be ikejime’d using a spike to instantly kill the fish.

Be sure to cut the gills and let the caught fish bleed out. You’ll want to run a shinkeijime wire down the spine (it follows the lateral line). Last you’ll want to get the fish in an ice slurry as fast as possible.

This will ensure your dorado fillets are restaurant-grade.

If you chose not to eat dorado raw, then we recommend smoking it whole on the smoker or grill.

Similar to how you’d roast a tuna head, you’ll be making soft flakey mouth-watering deliciousness fall right off the bone. Feed that to your friends and family and they’ll love you forever. If you can these fishes, you’ll be able to enjoy them year-round.

A top-grade pelagic species to say the least!

What kind of fish is dorado?

Dorado is a surface-dwelling fish found off-shore in temperate, subtropical, and tropical waters around the world. They are part of the Coryphaenidae family.

Is dorado fish a dolphin?

Dorado is known as dolphinfish but isn’t a mammal-like dolphins.

What is the difference between mahi-mahi and dorado?

Mahi-mahi has a unique shape with the males having a large pronounced forehead. They are bright yellow, and white, and have other colors that make them directly noticeable.

What do mahi mahi eat?