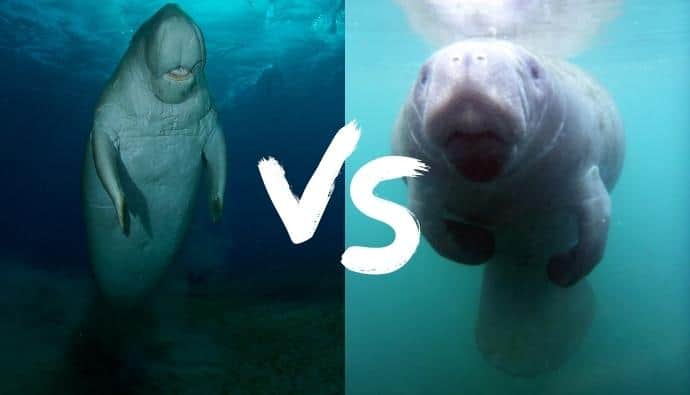 Manatees and dugongs, also nicknamed the sea cows, are large, gray aquatic mammals that spend their lives in the shallow, coastal waters of the tropical and subtropical regions.

They belong to the same order of mammals, which are called Sirenia. The Sirenia consists of five known species, the Dugong, the extinct Steller’s Sea cow, the manatees, the West Indian manatee, and the Amazonian manatee.

Although dugongs and manatees have a lot in common, they have several key differences. Let’s take a closer look at the dugong vs manatee comparison.

If you’re wondering about the difference between dugongs and manatees, you’re not alone. These two aquatic mammals look similar and even share the same scientific order (Sirenia). But some key distinctions set them apart.

Manatees live in shallow waters of the Caribbean Sea, the Gulf of Mexico, and parts of the Amazon River basin. They are particularly fond of warm, slow-moving rivers, estuaries, saltwater bays, and coastal areas where seagrass beds abound.

Some manatees, like west African manatee and West Indian manatee, migrate to warmer freshwater areas during the winter months. But, the Amazonian manatee (Trichechus inunguis) is the only species that can tolerate freshwater habitats.

On the other hand, Dugongs are found in warm coastal waters throughout the Indo-Pacific region, including the Red Sea, Indian Ocean, and parts of the western Pacific Ocean. Their range extends from East Africa to Australia and New Guinea.

They love saltwater grass beds and can often be found in shallow, sheltered areas like lagoons, bays, mangrove swamps, and the coastline. Unlike manatees, they do not tolerate freshwater habitats and are rarely found more than a few miles from shore.

All manatees are herbivores and eat various aquatic plants, including seagrasses and freshwater algae. They use their large, prehensile divided upper lip to grip and tear at the plant matter, which they then swallow whole.

Manatees have a slow digestive process and take up to eight hours to digest a single meal. As a result, they only eat about 4-9% of their body weight each day.

Dugongs are also herbivores, and their diet consists largely of seagrasses. They use their long, thin snouts to forage for food on the ocean floor and can consume up to 30% of their body weight in a single day. They will occasionally eat other marine plants, as well as small invertebrates.

The largest manatee is the Florida manatee (Trichechus manatus floridanus), which can grow up to 15 feet (4 m) long and weigh over 3000 pounds (1400 kg).

One of the easiest ways to tell a manatee and a dugong apart is by looking at their snouts. Manatees have rounded paddle-shaped snouts. They have a prehensile upper lip that they use to grab and eat plants.

While dugongs have long, narrow snouts that taper to a point, they also have thick mustaches (called vibrissae) that grow on their chins and upper lips. These mustaches are extremely sensitive and help the dugong find food in murky waters.

Even though they are both herbivores, manatees and dugongs have different types of teeth. Dugongs have two incisors in the front of their mouths that continue to grow throughout their lives.

These teeth look like tusks and emerge when the dugong male hits puberty. Female dugongs also have these teeth but emerge much later in life. Manatees have much flatter teeth that are used for grinding up plants.

They also have molars and premolars that cannot be easily differentiated and are replaced throughout their lives. The replacement of their teeth is known as marching molars because the new teeth come in behind the old ones and push them out.

The West Indian Manatee and African manatee have four or three nails on each flipper. The South American manatee does not have any nails on its flippers.

The final physical difference between these two animals is their tail. Manatees have paddle-shaped tails that they use for swimming. A manatee’s tail is also relatively short, only measuring 2-3 feet (0.6-0.9 m).

Dugongs have a fluke-shaped tail with deep notches on the sides. The tail is an essential part of a dugong’s anatomy because it helps them swim and navigate through the water.

The skin of a manatee is thick and wrinkled with a coarse texture. The skin is also green or brown. The thickness of a manatee’s skin helps protect them from predators and injuries.

It also has short hair scattered throughout, which helps a manatee feel things since they have poor eyesight. The skin of a dugong is also thick, but it is smooth with a leathery texture. The skin becomes grey or brown after a dugong reaches maturity.

But their skin color at birth is cream or light gray. Dugongs also have stiff hairs on their body, but they are much shorter than those on a manatee. They also have whiskers on their chins and lips that help them find food.

Dugongs are very social animals and live in herds of several hundred individuals. These herds are made up of both sexes, but there is a higher ratio of females to males. Dugongs will often travel together, forage together, and mate together.

Dugongs are also very vocal animals and communicate with each other using a variety of sounds. These sounds include grunts, squeaks, and screams. The male dugongs tend to be monogamists and will mate for life with one female.

Manatees are generally solitary animals, but they will congregate in areas where food is abundant. They will also form bonds with other manatees, particularly mothers and calves. These bonds are important because they help to protect the calves from predators.

Unlike dugongs, male manatee can have several female manatees in their harem, but they will only mate with one at a time.

Female Dugongs reach sexual maturity at around the age of ten years old. But they don’t usually mate until they are around fifteen years old.

The mating season for dugongs lasts from September to October. During this time, the male dugongs will compete for the attention of the females.

Manatees reach sexual maturity at around the age of five years old. But they can bear kids even at three years since their sexual maturity age is low. The mating season for manatees lasts from spring to summer.

Even though manatees and dugongs are both marine mammals, they have several differences. These differences include their physical appearance, habitat, diet, and reproduction.

By knowing these differences, it is easier to appreciate the uniqueness of each animal as they are fascinating creatures that are worth learning more about.