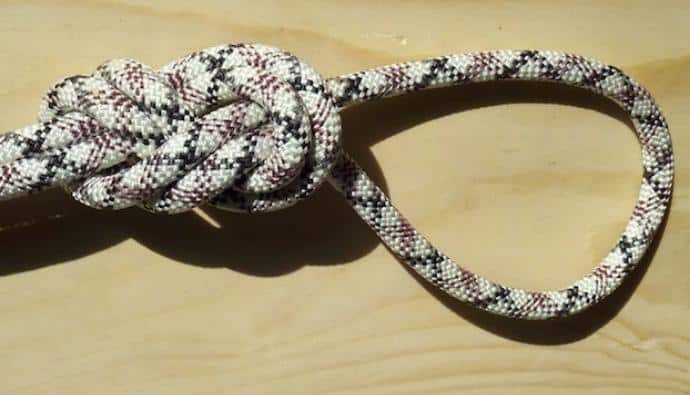 Knots are essential to everyday life, from lacing up our shoes to mooring our boats at the docks or an integral way of securing things in place. It’s even used as a euphemism for marriage, unifying two parties as one.

There’s a variety of stopper knots known as a figure 8 knot, which is particularly effective at retaining anchor points and is often used for rock climbing or sailing. The figure 8 knot is very similar to an overhand knot and may casually jam under force. In most cases, it can be done far more simply than its cousin, the overhead.

Note: The overhand often must be cut rather than untied.

Used synonymously with the term Flemish knot, the figure 8 knot was brought into practice by sailors who used it to tie the ends of a rope. Significantly simpler to undo than the overhand, it lacks the same propensity to jam and maintains the integrity of the fiber while being just as secure and robust.

How to Tie a Figure 8 Knot

1. The first step in tying a figure 8 knot is creating an eight at the rope’s end. To do this, create a loop at the bottom with the main line sitting on top of the end piece, which then wraps over the main line above the loop.

2. The second step is to thread the end piece through the bottom loop and then back through again, creating another loop further distended from the now growing knot.

3. The third step is to retrace the end piece of rope, then back up and over.

4. Once this line is over, loop under the mainline and thread the end piece through the uppermost loop.

5. Once this is completed, pull down on the bottom bus loop, which will cinch down the entire knot, creating a stable and reliable knot for both climbing and sailing.

If this knot was tied on a hook, it could be explained in the following steps.

1. Feed the line through the hook or lures eyelet.

2. The tag end should be passed around the main line to form the loop.

3. Feed the tag around the vertical lines front and back through the initial loop.

4. Wet the knot before tightening. Once complete, it should look similar to figure 8.

Figure 8 is an incredibly effective knot for a variety of reasons.

Although it is usually the preferred knot to secure hook or sinker, it may be used with a heavier line for a more aggressive tackle. When angling for larger, more aggressive species or using a much thicker line, the figure 8 knot requires less dexterity while maintaining its tensile integrity and reliability.

For the sailors reading this, figure 8 is often used to stow gear, equipment, and tackle that may need to be untied at a moment’s notice but requires a sturdy knot.

One of the biggest perks of the figurine is that it is straightforward to undo manually and does not jam. In contrast, many other overhand knots require the involvement of a knife or other exterior factors to undo.

Because this was a method of preventing ropes from running out of devices for retention, the figure 8 knot works well with climbing.

Often one of the first knots novice climbers learn, the figure 8 attaches easily to the belt while maintaining up to 80% of the rope’s original integrity and knot, meaning it conserves as a strong anchor point for any climbers that lose their grip.

It is an incredibly strong and reliable knot easily dismantled when necessary. It will hold under extreme pressure and can only be undone with specific, intentional unthreading of the line.

This can be one complicated knot to tie. Speaking directly as the author, it took me over an hour to fluidly master this knot, and I’m not quite sure I would trust my life with it climbing (more so from my own knot tying capabilities than the knot itself.)

The figure 8 knot may not be one of the easiest ones to tie, but it can be effective in specific situations and is incredibly strong. Perfect for heavier tackle for anglers, climbers, and sailors, the figure 8 is a knot that anyone who interacts with rope frequently should learn.

As always, good luck and stay safe out in the water.