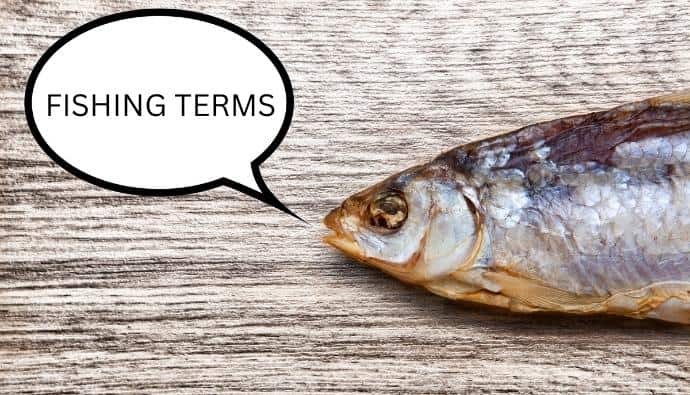 Here is a list of fishing terms that will ensure that every angler uses the same terminology when discussing angling and fishing in our local waters.

Every pastime has its special terms, and fishing is no exception. You need to learn and remember a lot of information, from tools and methods to fundamental fish anatomy.

Whether you prefer kayak fishing in a calm pond, venturing offshore to look for pelagic fish or fishing for other fish species, you must be familiar with these fishing terms.

It is any fake bait or lures employed by anglers to catch fish.

Many types of conventional reels’ rotating spools can start spinning quicker than the line comes off when you cast or let out the line under pressure. This creates a tangle known as a “bird’s nest” or backlash.

It is a fishing method that uses bait chunks and a baited hook to stir up a feeding frenzy. This method is comparable to chunking or chumming.

The phrase is sometimes used to describe a situation in which fish are feeding so quickly that several fish can be hooked and slung into the boat in a short period of time.

This fishing method entails dropping a weighted hook or lure on the water’s surface.

It’s a bait type that resembles a huge blade of metal that vibrates or gives the impression that it is swimming in the water. It is mainly applied in fishing deep.

It is water that contains some salt but is primarily fresh. They tend to cluster around the mouths of tidal creeks.

These “safety pin” wire lures feature a weighted body, skirt, and hook on one wire and a propeller blade on the other. They are used by anglers who practice surface fishing.

It is a metal or hard plastic lure in a spoon shape that jiggles to attract fish. It is paired either with a swinging hook or a fixed (solid) hook that has single, double, or treble points.

It is a fishing technique where scent or bait is thrown into the water to attract fish to bite on a lure or baited hook. Chum is utilized in both freshwater and saltwater and is made up of dead, lived, ground-up, or prepared scents and baits.

It is a strategy used by many anglers to have a big catch. It involves letting your boat drift as you fish.

A lure with a buoyancy feature; hence it remains dry while on the surface of the water. The lure is mainly used in fly fishing.

A gaff is a device employed to pull fish over the boat’s side. It comprises a big hook attached to a pole or, if a fish is strong enough to drag the angler’s rod out of their hands, a big hook secured to a thick rope tied to the boat.

Flying gaffs are typically used for very large fish that would easily pull the gaff out of an angler’s hands.

It is a fishing tactic a fishing line is suspended out to sea and away from a boat using a kite.

it is a “J”-shaped metal wire tool with an “eye” or opening from one end where the line is attached and a tip at the other to grab the fish. A circle hook is an environmentally friendly form of a fishing hook with an angled point. Double and treble hooks, respectively, have two or three points.

The act of fishing through holes drilled or carved into the ice of a frozen bay, river, or lake.

It is the practice of jerking the rod tip repeatedly to give bait or lure motion. Jigging is a very common fishing practice and comes in various forms like vertical jigging, speed jigging, and cast-and-retrieve jigging.

It is a net employed to bring a hooked fish onto the shore or a boat.

It is a stretch of line utilized to join the hook or lure to the main fishing line, though heavier than the main line. Leaders are frequently attached because the fish’s teeth or a structure that the fish is clinging tight to could abrade the end of the line.

A specially designed “string” is employed for fishing. The most common type of line is nylon monofilament. There are other types of fishing lines, which are constructed from various materials like wire and braided fibers.

It is a water tank in a boat where you can keep your live bait or catch. Most boats’ live wells have a constant flow of freshwater surrounding them, which helps to keep the fish alive.

A fly line is a specialty line with a plastic covering over a core that is frequently tapered (changing diameter) to facilitate fly fishing.

Sometimes additional leaders are introduced to diminish visibility. For you to avoid bites from fish with sharp teeth, you may apply wire leads in other circumstances.

Many people mistakenly believe fishing poles and fishing rods are the same, but this is not the case. The poles are actually the most basic type of rod and are made up of a pole with the line tied off at the end.

This is a fishing rig made of hard plastic, Styrofoam, or cork that gurgle when catching fish. The noises produced are intended to mimic the sound of fish feeding on the surface, drawing the attention of the game fish.

A fishing reel is a mechanical tool used to secure and spool the fishing line. Fishing reels are usually equipped with a brake and line spool for slowing down a moving fish.

They also have a foot to attach to a rod and a handle to recover the line. There are several types of reels, including SPINNING (with line wound around a stationary spool), CASTING (with a rotating spool), FLY (store thick fly line and fight big fish), and SPINCAST (with a nose cone).

A fishing rod is a pole that is typically used to catch fish. Most rods are made of composite, fiberglass, and graphite materials.

They come in various types, including rods for baitcasting, spinning, offshore trolling, fly fishing, and surf fishing. The majority of rods feature guides where the line runs and a clamp to hold the reel.

A lead or other metal weight is used to drop hooked bait or lure.

Soft plastic lures are made from soft plastic material to mimic crayfish, lizards, worms, or any other general writhing creature. They are usually supplied in large quantities for the angler to rig on hooks.

It is a fishing line that lacks pressure or tension.

These safety pin-style wire lures have a weighted body, a skirt, and a hook on one end of the wire and one or more spinner blades on the other. They are mainly used when fishing near a structure like trees or stumps.

It is a fishing technique where anglers use removable soft plastic tails without changing the bait once it has been cast.

It is a compact gadget that has two or more rings (eyes) and a rotating center. They are placed between the line and a lure or leader to eliminate line twists. In contrast, a line twist can happen when a revolving lure twists line, creating tangles.

It is a bag or container with designated chambers for storing hooks, lures, terminal tackle, and other fishing tools.

This is a descriptive term that is used to refer to rigs, hooks, sinkers, bobbers, swivels, snaps, and any other fishing gear employed at the end of the fishing line.

A fly is employed in fly fishing and designed to glide beneath the water’s surface.

Wobbling spoons that have a fixed hook and shield for fishing weeds.