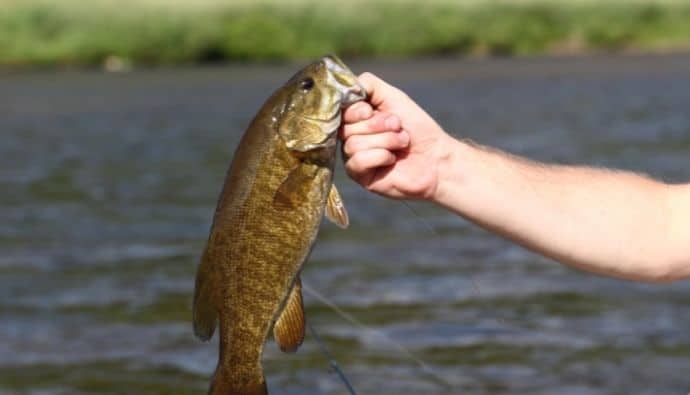 Today, we’ll be covering how to catch smallmouth bass with fly fishing with Dave Hurley.

Why choose a smallmouth over a largemouth bass?

Dave Hurley grew up in Southern California where he has been pursuing largemouth bass ever since he was little. So he developed his passion for fishing through that fish.

They pull harder than largemouth and could arguably be the pound-for-pound champ between the two. They pack a big punch and are just a fun fish to pursue in both rivers and lakes.

Why are other people so focused on catching largemouth?

I asked Dave to explain why he thinks largemouth is so focused on across the nation.

Dave thinks it is just geography. He thinks if you are in Southern CA, they held the world record years back. Big largemouths are hard to catch.

In certain lakes, it’s as if the big largemouths have PhDs in not getting caught. They are looking at every lure under the sun. And that was a thing for Dave – trying to figure that game with a fly rod.

Largemouths fight; they are a fun fish to pursue but if your place has a healthy smallmouth population just like the world-class Lake St. Clair, bass fishing is just off the chain.

When you are on that lake, and the smallmouth is in the pre-spawn, it is just wild. Those fish will pull so hard, they fight so hard, and they are just awesome.

How would one increase smallmouth bass fishing luck on the fly?

Dave explained what you need to do to increase your luck if you are new to smallmouth fishing, especially on the fly.

1. Consider catching them in the spring

According to Dave, the smallmouth bass is fairly easy to catch at the right times. So obviously, in the spring, when they are just getting out of that winter mode, trying to put on the feed bags, they are very easy to catch, and that is one of the cool things.

They are very accessible to people. So many of the rivers out here have significant populations of smallmouth. You can pursue them with trout tactics. People use dry flies, hopper droppers, or just hoppers and very simple techniques.

And you can take it as far as you want in terms of pursuing these fish.

Dave explained that catching smallmouth is fun when getting into fly fishing. One of his favorite memories was when he was out on the lake with his three-weight rod and just a dry fly.

And on that three-weight rod, that little 12-inch fish fought as hard as anything. So if you go out with the expectation of catching fish of any size, the smallmouth won’t disappoint.

3. Target the bigger ones

Dave explained that some of the things he likes to do are throwing streamers for the smallmouth bass and targeting bigger fish which require more skills to do floats down the river.

And that is kind of a whole thing where you have someone on the oars. You are trying to keep the boat right. You are casting the shore, casting the structure, and that is an intense way to pursue them, but super fun.

Many guys like to pursue that 20-inch mark which is hard to do, especially in a river. But with bigger lakes, you can get over five-pound smallmouth bass on a fly rod.

Make sure you say hi to Dave on Instagram (@davehurl).