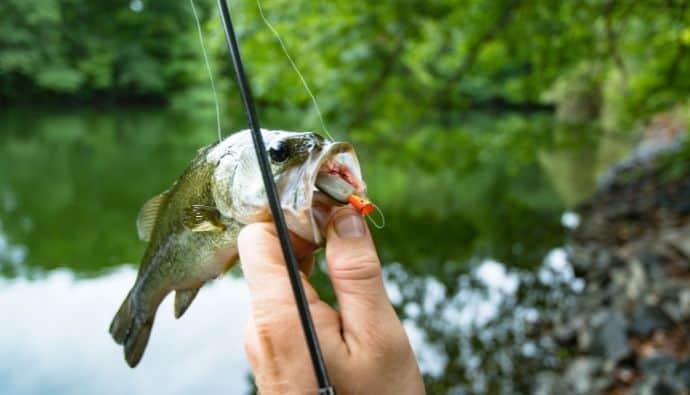 A freshwater game fish belongs to a group of popular sport fish within the order Perciformes or “perch-like.”

Nowadays, freshwater game fishing is one of the most exciting and rewarding hobbies you can take up, but it’s also one of the hardest to get started.

At the same time, you have a lot to learn before you even think about getting your first rod and reel out on the water, but let us help you with that!

In this list, we’re sharing the top 8 freshwater game fishes. So you can learn and discover how to catch them yourself on your next trip out into nature’s wilds!

Here are the top freshwater game fishes you can catch on your next fishing activity.

The largemouth bass is a well-known freshwater game fish, and this freshwater fish is known for its strength and tenacity.

More so, it’s closely similar to the smallmouth bass but always puts up a good fight with anglers. While its upper jaw extends behind the eye, it’s sometimes mistaken as the spotted sunfish due to its olive in color. Now, the difference is that the largemouth bass has a deep dip that likely separates its first and second dorsal fins.

These fish sometimes look like white bass or young striped bass. But, the belly of these fish species is yellow, with two lowermost stripes broken just posterior to the middle. Most anglers do not catch this small fish.

Redear Sunfish is also known as the “shell cracker.” This game fish is usually found near the bottom in warm water.

The black crappie freshwater fish is one of beginner anglers’ most common freshwater catches. Crappies have irregular and scattered spots.

The upper jaw is long, almost reaching past the middle of the eye. Besides, his freshwater fish can be like white crappie. You must note that there are seven to eight spines in the black crappie’s dorsal fins.

From midnight to 2 AM is the best time to catch this freshwater fish. Crappie stays in deep, clearer, and cold water with lesser currents.

Likewise, they’re also drawn to plenty of live bait and artificial lures such as minnows, small jigs, hair jigs, and worms. Not to mention, the natural predators of the crappies are the largemouth bass.

The name catfish refers to the pair of “whiskers” present around the mouth of this freshwater fish. Most catfishes are nocturnal and feed on almost any kind of animal or vegetable matter.

The flathead catfish possesses a broad and flattened head with small eyes on top. Additionally, this game fish has a pale yellow to light brown or olive back and sides mottled with dark brown or black. Aside from that, flathead catfish prefer deep pools or rivers and lakes.

Most trout species are closely related to salmon.

The rainbow trout bear the name from the beautiful colors that shine on their skin. In addition, its coloring pattern depends on its habitat, age, and spawning condition.

These freshwater fish species are commonly torpedo-shaped and are generally blue-green or yellow-green. More so, there is a broad red or pink stripe along the side of the rainbow trout fish, while the pink stripes may not always be present in all forms.

Brook trout are a great fish native to the east coast of the United States. Generally, fishing for these beautifully colored yellow spots over an olive-green to orange or red back is worthwhile.

Some of these fish species spend their entire lives in freshwater. While other fish species, called “salters,” are born in freshwater, migrate to the ocean once an adult, and return to freshwater to reproduce.

Lake trout, also known as salmon trout, is large fish usually found in deep, cool lakes. This game fish is greenish-gray in color covered with pale spots. During springtime, this is caught in shallow water. While in summer, larger fish are caught by trolling in deep water.

The walleye perch is a popular freshwater game fish. Besides, it’s considered one of the largest members of the perch family. This freshwater fish is gold and olive color, usually long and thin, with a white belly.

A walleye’s back is crossed with more than five black bands, and the mouth is large with sharp teeth. Plus, their low-light vision is an advantage over other species that helps catch their prey in the dark.

Anglers can easily distinguish yellow perch from their 6 to 8 vertical bands found across their back and sides. Besides, freshwater fish is characterized by its dorsal fin that is completely divided into a tapered portion.

The northern pike is also known as the water wolf or the great northern pike. In addition, this fish is elongated with a bluish-green to gray dorsal region. The scale of the northern pike shows irregular rows of yellow or gold bean-shaped spots.

Anglers can catch northern pike east New York, Minnesota, the Ohio Valley, and the Great Lakes basin. The northern pikes are ambush hunters and some of the biggest freshwater fish. That’s why anglers enjoy the challenge of catching them.

Chinook salmon is also known as king salmon. This salmon has a blue-green head. Anglers can also see irregular black spots on its tail, back, and upper fin. Similarly, these freshwater fish prefer to stay in a cold water temperature with high oxygen content.

The carp species are now the most abundant large freshwater fish in some countries. Also, Carp is a popular freshwater fish for American anglers and is extensively farmed in Europe, Asia, Middle East, and Europe.

Anglers can choose various sizes, shapes, and colors of fishing baits and lures. But, natural bait mostly works best for freshwater fish. More so, these baits include worms, leeches, minnows, crayfish, and crickets.

Fishing Tip! Check out our article on the best freshwater lures for more ideas.

In choosing the best freshwater hooks, make sure to find the perfect size for the fish you want to catch.

The rods used for freshwater fishing vary in width, length, and flexibility depending on where you’re fishing. However, the best fishing rods are those stiff and strong enough not to break when a fish is caught on your line.

Fishing lines are also available in various weights. At the same time, you must choose a monofilament nylon fishing line if you’re a beginner.

A 6 to 12 test line weight is a good start because using heavier fishing lines may reduce the number of bites or strikes. But if the fishing line is too light, a bigger fish can break it, so use a heavier one.

No need to worry about the fishing spots as there are plenty to choose from; just carry helpful fishing tips and tools with you.

You may not be an angler, but there’s no question that fishing is a popular pastime. Whether you’re looking to catch dinner or just enjoy the outdoors, freshwater game fish species can provide hours of entertainment.

Now that you know some of the most common and sought-after species in the US, it’s up to you to go on your next fishing trip with confidence!