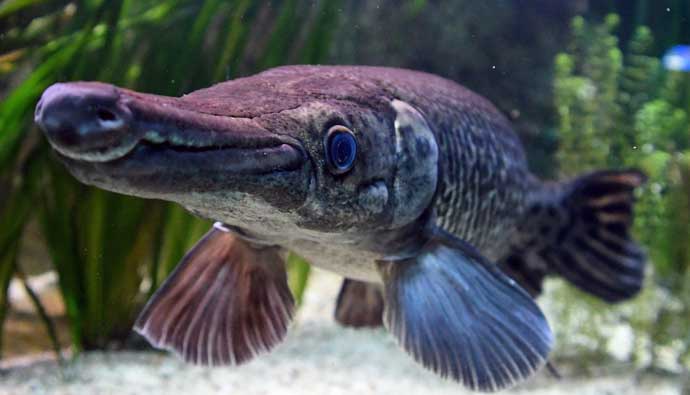 Did you know that there are over seven different types of gar fish out there? While they differ in appearance and location, all of them have hard scales and jaws that are full of sharp teeth.

These fish are related to the bowfin and live in freshwater habitats. However, some can be found in saltwater too.

Before you go gar fishing, make sure you check out your local regulations.

Here are the popular types of gar fish:

Identification – This lepisosteus osseus gar has a slim profile with thin jaws filled with sharp, conical teeth. The torpedo-shaped and streamlined body ranges from brown to olive green in color.

Distribution – This gar species live in the eastern seaboard from the Delaware River to central Florida and in the St. Lawrence River in Quebec. They live in the Mississippi River basin.

Size and age – The male longnose can survive for 17 years, and females can live for 22 to 30 years. It can reach a length of about 2.5 feet.

Habitat – They live in freshwater lakes and brackish water in and around swamps, coastal areas, as well as the sluggish backwaters of streams and rivers.

Spawning season – The spawning season occurs in the spring and the summer. During this time, the longnose gar swims upstream to spawn and then move back downstream into larger pools.

Food – Longnose gar are surface feeders, and since they don’t have giant mouths, they usually feed on smaller fish such as sunfish, shad, small catfish, and even smaller gar.

Identification – This garfish is cylindrical and is often confused with a log in shallow waters. They have hard ganoid scales and spots that extend from the top of the head to the fins.

Distribution – This gar live throughout the drainages in the Erie and Michigan Lakes. The fish also thrives in the Mississippi River, all the way up to the northern coast of Mexico.

Habitat – This gar thrives in open, shallow waters as well as stagnant water, and it can often frequent the surface around trees and in brush covering.

Spawning season – Spawning occurs from February to June and varies with location.

Food – This gar feed primarily on aquatic crustaceans such as crayfish as well as other species of the dish such as bass, catfish, shiners, and crappies.

Identification – Unlike other types of gar, the shortnose gar has a shorter snout with an upper jaw that is longer than the rest of the head, which only contains a single row of teeth. It is deep green or brown in color.

Distribution – Can be found in the Mississippi River Basin from south-central Ohio, northern Indiana, and Wisconsin and in Louisiana.

Size and age – The shortnose gar can grow as big as 24 inches and can live for 20 years.

Habitat – These species inhabit calm waters in large rivers and backwaters as well as quiet pools where it likes to remain around downed logs and vegetation.

Spawning season – Shortnose gar starts to spawn in early to mid-April till the end of May.

Distribution – Florida gars can be found from the River drainage Savannah in Georgia to Ochlocknee in Florida.

Size and age – This Florida fish can grow to about 20 to 50 inches in length. While data is limited regarding lifespan of this species, like most gar, it should be able to live for 18 years on average.

Habitat – This gar inhabit medium to large canals, lowland streams, and lakes that have sandy or muddy bottoms and which are near vegetation.

Food –This gar feeds on shrimp, fish, and crayfish.

Identification – Tropical gar have short, broad snouts and nostrils at the front of the muzzle. Their teeth are long and fang-like, and their scales are smooth and shiny.

Distribution – Can be found in the Caribbean and Pacific drainages of Central America and southern Mexico.

Size and age – This tropical river gar can grow to about 20 or 23 inches in length and can live for 25 years.

Habitat – This gar can be found in backwaters and slow-moving parts of lakes, rivers, and shallow lagoons. The fish can sometimes be found floating on the surface of the water.

Food – This gar mainly feeds on cichlids and other fish, but it is also known as insects, copepods, and plant material.

Identification – Alligator gar is the largest. It has a distinctly long and cylindrical body, a long snout, and diamond-shaped interlocking scales with a rounded tail fin. Adults have two rows of sharp teeth on either side of the upper jaw, and it is usually grayish-green or brown.

Distribution – Alligator gar fish can be found in the Gulf coastal plain from the Econfina River to Veracruz in Mexico.

Size and age – This massive species can grow to an impressive 3 meters in length and can live for over 26 years.

Habitat – Alligator gar is usually found in lakes and reservoirs in backwaters of lowland rivers. This includes bodies of water that experience low currents such as brackish marshes that it does not have to struggle to swim in. This includes ‘dead lakes’, a body of water that is inundated by an adjacent river when the water level rises and which is landlocked at normal levels

Spawning season – Alligator gar breed once a year between May and July.

Food – This large gar feeds on anything it can catch by surprise. This includes fish, turtles, small mammals, ducks, and carrion.

Identification – The Cuban gar has a smooth body with no patterns or spots. It also has a mottled, orange tale.

Distribution – This endangered gar can be found in the rivers and lakes of western Cuba and the Isle de la Juventud.

Size and age – Adult Cuban gars, can grow to about 3.3 feet in length, but some have been known to grow as large as 2 meters. There is currently no information available about the lifespan of these species.

Habitat – Cuban gar inhabits brackish waters in rivers and lakes, and it is a freshwater species.

Spawning season – There is currently no information available about the spawning season of this gar, but like most garfish, it is assumed that it spawns from early to April to the end of May or June.

Is gar good to eat?

The fish is good to eat, but its gar eggs are highly toxic.

What do garfish eat?

What is the best bait for garfish?

The best bait for gar includes the gizzard shad, mullet, and common carp.

The gar comes in a range of sizes, and each species has its own preference when it comes to food. This info will come in handy when you are gar fishing.