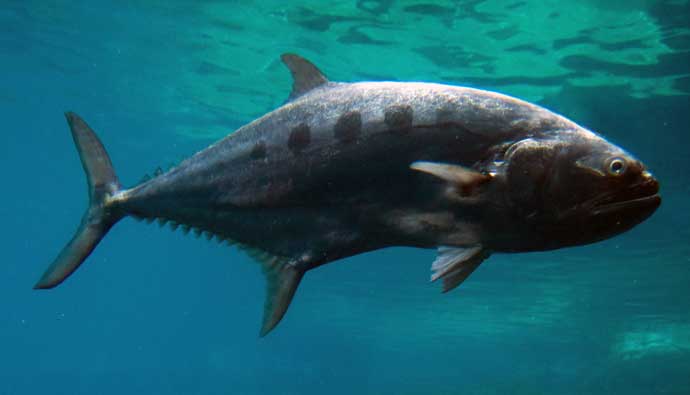 The name queenfish is common for a few different species. The one we’re going to cover in this article is the Giant Queenfish (Talang Queenfish), which is common to target in Australia and the South Pacific.

This fish will give you a run for your money on medium tackle.

Let’s get you a big one!

The queenfish belongs to the drums and croaker family. It can be found in the eastern Pacific Ocean along the North American coastal waters from Oregon to Baja as well as Shark Bay in Western Australia. As a tropical sport fish, queenies are powerful and will leap out of the water to throw off a hook or lure.

Queenies can be found in shallow sand flats that have access to deeper water-rich in baitfish that the fish likes to eat. It also frequents areas around jetties, inshore reef systems, and estuaries. The queenfish can also be found in water that is 100 feet deep, especially when the fish is spawning.

The best time to target them is around the turn of the tide in areas that experience strong currents that cause rips and eddies. The fish tends to move to shallow water as the tide rises.

How to Catch Giant Queenfish

Queenies are powerful and fierce fighters, but they do not head into structures when caught, so you don’t heavy-duty tackle to catch one. They are available wild caught. Often, gill nets, by lining and trolling are the most common ways to catch queenfish.

A rod that works with 30-50 pound braid will be more than enough for bigger ones. Couple that with a 30-pound leader and you got yourself a robust system.

This fish will take fish bait, but the best way to catch them is with lures such as stickbaits and poppers. Yet, you can also use soft plastics, lead head jigs, and small metals. If the kingfish only darts around the lures and don’t strike, change tactics.

If you want to catch queens in Australia, make plans for a fishing trip in the months between June and October. You can also fish in November, December, April, and May, but you will find fewer queens during those months and none in January, February, and March.

How to Clean Giant Queenfish

What do queenfish eat?

It feeds on marine invertebrates and small fish such as anchovy as well as crustaceans.

How big can queenfish get?

Queenfish can grow to weigh as much as 33 lbs, but most only grow to about half that size.

Where can I catch big queens?

The fish is abundant in Australia since it does not have a lot of commercial value, but if you want to target the big ones for sport, head for North Queensland.

Queenfish can be difficult to take alive because of the sharp spines they have and especially if they are caught in a light tackle. Make sure you have thick gloves on to prevent painful injuries.

When you are able to catch one, use its shiny skin to make reflective lures.

Fun Fact! The USS Queenfish was the United States Navy’s first ship to be named after the queenfish. After its World War II service, it served as Flagship Submarine Force, Pacific Fleet and was homeported at Pearl Harbor before later transfering to San Diego.