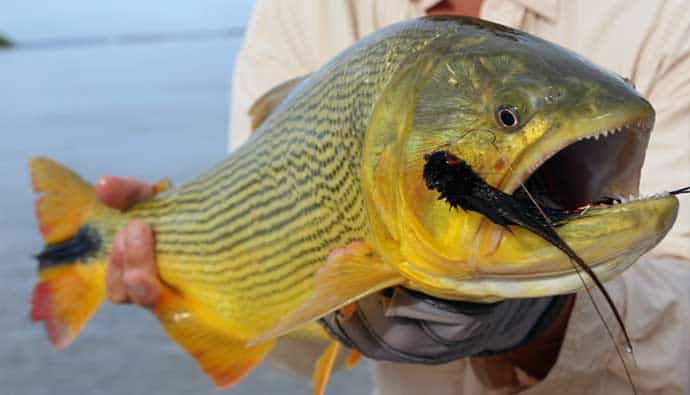 There aren’t many fish as majestic to fish than the golden dorado.

Also known as the river tiger, Argentinean pit bull, pez dorado, and dorado, this predatory freshwater fish can be found in central and east-central South America.

Due to the golden dorado’s large size and feistiness when caught, this South American fish is a favorite among veteran fly anglers.

The golden dorado has a large head and a powerful jaw that is filled with sharp teeth that can slice through plastic and wooden lures. It is not related to the saltwater fish dorado or to any salmon specie.

These are in two rows and include canines which extend along the outer margin of the maxillary and which allow the golden dorado to swallow its prey in a single gulp. Juveniles are silvery in color which changes to a yellow-golden hue when they grow older. The shape of the body of the golden dorado is similar to a salmon’s and it has black stripes and a scalloped tail.

This monster fish is native to warm freshwater habitats in Uruguay, Paraguay, Brazil, and northern Argentina. If you’re in need of a vacation, use the golden dourado as an excuse to visit some distant lands. It is an apex predator and eats a variety of fish along with insects, crustaceans and even small vertebrates such as rodents, lizards and small birds.

Running water in a river indicates where this freshwater predator can be found in a river because of the way this fish feeds. While small rodents and birds are a part of its diet, it prefers to eat smaller fish if they are in abundance.

To catch its prey unawares so it can swallow it in one gulp, the golden dorado remains along the upstream face of rock piles and waits for small baitfish to swim by. It changes location from day to day according to the movements and concentration of the fish which makes trolling the most productive fishing method.

How to Catch Golden Dorado

You can either go on trolling or fly fishing trips for a golden dorado.

Whether you are trolling for or your best fly rod combo in Argentina, use strong hooks. The fish is notorious for its strength and can destroy a plastic plug and simple treble hooks. Use single hook lures or large wobbling spoons with fixed hooks to catch it instead.

If you are planning to go fly fishing for this freshwater fish, use effective flies such as the Clouser Deep Minnows or Andino Deceiver. Make sure you have several fly varieties in various patterns for your fly fishing trip.

Use a fast action 6, 7, 8 or 9 weight rod and a fly reel that has a good drag. The backing of the reel should also be well loaded.

The best time for monster river fishing for jaw characin runs from December to May but if you prefer warmer climates, you should head out during December and January. Temperatures can reach up to 95 degrees during those months and cool to about 55 to 85 degrees in March.

The fish is plentiful throughout the season. The seasons in Argentina are opposite compared to those in the US – October and March are warmer months and the golden dorado can be found easily during this time.

Golden dorado pez is migratory by nature and they migrate for both spawning and feeding purposes. The main diet of this river monster is sabalo, a small baitfish that is widespread in tropical South America rivers such as the Bolivian river which is why jaw characin is abundant there. Muck like mullet, sabalo travel in schools closely followed by the dorado.

As the spawning season approaches, this freshwater predator swims upstream and migrates to headwaters in the upper Amazon. Besides these locations, some golden dorado can also be found as far south as the Island of Martin Garcia and close to downtown Buenos Aires. The fish moves upstream as it grows larger and never ventures beyond the low salinities of the river mouth.

Is a dorado and golden dorado the same fish?

Yes. The name ‘Dorado’ is Spanish for ‘golden’ so the name is used interchangeably.

Is the golden dorado endangered?

Golden dorado numbers have declined due to overfishing and dams which restrict its breeding migration. The fish is listed as threatened in Rio Gande de Sul in Brazil and in Paraguay.

What does golden dorado feed on?

In the larval stage golden dourado feed on plankton and start feeding on small fish as they grow older and larger. As an apex predator, adults eat a wide variety of fish but they also feed on small rodents, crustaceans, and large insects if their favorite fish is scarce.

If you want to strike gold, fishing for river tigers should be part of your list. This predatory fish may be king in the water, but it doesn’t stand a chance against fly anglers who has the experience, rig, and skills to catch it.

While the tips and strategies given in this guide can help you to trick this feisty fish, practice will make you a pro. If you have any tactics and strategies that you used to successfully capture this monster fish, share in the comments below, and do share this guide if you liked it.

Note: The Golden Dorado is not the same as the Dorado fish (aka mahi-mahi).