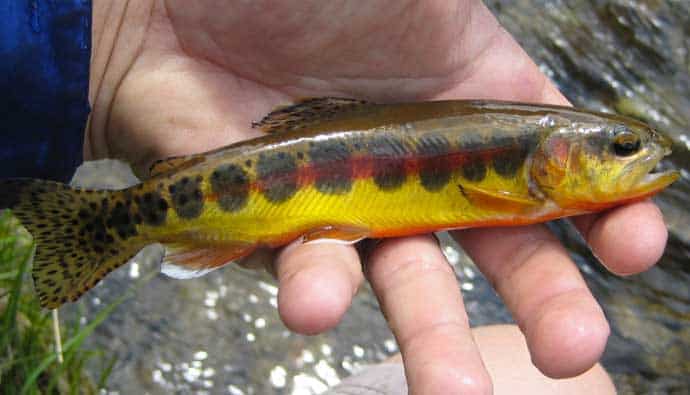 Catching golden trout on a trout fishing trip is probably one of the most relaxing yet exciting fishing trips an angler can go on.

The golden trout is also known as the California Golden Trout and is native to Golden Trout Creek, Volcano Creek, and the South Fork Kern River. It’s the state fish of California.

Be sure to check out our full guide on Trout Fishing Tips.

The golden trout can reach sizes up 11 pounds. This hard fighting fish is a rush to catch. In this article, I am going to show you how to do just that.

I will cover several tips, as well as the difference between golden trout and other trout species.

What Are Golden Trout?

Originally golden trout were described as a subspecies of the salmon species, with a name Salmo mykiss aguabonita. Golden trout is still often considered a subspecies. (Now called Oncorhynchus Mykiss Aguabonita) along with several other rainbow trout subspecies.

These are commonly known as redband trout. FishBase and the Catalog of Fishes however now list O. aguabonita as an independent species rather than as subspecies of O. mykiss.

The golden trout has golden flanks with red, horizontal bands along the lateral lines on each side. They also have about 10 dark, vertical, oval marks (called “parr marks”) on each side.

These golden trout have been transplanted to lakes have been recorded up to 11 pounds.

The golden trout is commonly found at elevations from 6,890 feet (2,100 m) to 10,000 feet (3,000 m) above sea level. These fish are native only to California’s southern Sierra Nevada mountains. Outside of its native range in California, they are more often found in cirques and creeks in wilderness areas around 10,500–12,000″

The only other species of fish indigenous to the native range of California golden trout is the Sacramento sucker.

Years of overexploitation, mismanagement, and competition with exotic species have brought golden trout to the brink of being designated as threatened.

Introduced brook trout out-compete them for food. Introduced brown trout prey on them and introduced rainbow trout hybridize with them, damaging the native gene pool.

Populations have been in steady decline for decades.

How to Fish for Golden Trout

Fly fishermen and other anglers have to match their lures to the types of food items available at the high altitudes where they occur.

Caddisflies and midges are most effective. Though many have been caught with spoons, spinners, worms, salmon eggs. As well as small crustaceans and various small insects. The following are fishing methods used to catch them:

The following are lures, tackle, and bait that are a good choice:

Where To Catch Golden Trout

The golden trout is native only to the upper Kern River basin in Tulare and Kern Counties, California. The golden trout are usually found in clear, cool waters at elevations higher than 6,890 ft.

An area of warm water where the South Fork joins the Kern apparently serves as a natural barrier that keeps the two subspecies apart. They have been introduced to other areas. These include the states of Washington, Idaho, and Wyoming, which have self-sustaining populations.

It is believed that most of these populations have hybridized with the cutthroat trout. According to some fisheries scientists, most trout in the Kern River basin are also hybrids of recent origin. The only pure populations of golden trout are those limited to the headwater areas.

What Are the Differences Between Golden Trout and Other Trout?

Oncorhynchus aguabonita is rare and elusive. They inhabit some of the most remote lakes in the United States.

These trout have a very limited range, as they are only found in high alpine lakes and streams found in the Rocky Mountains and the Cascades. Because of this, reaching good trout waters is no easy task usually requiring a long hike or even horse pack in.

Additionally, due to the environment in which they live in (very cold, low nutrient water). This trout is generally quite small. As there is just not enough food to support larger trout.

They are Particular Eaters

Despite the relatively low fishing pressure they receive, this trout can be somewhat difficult to catch. They tend to be particular about what they eat. Another consideration is, not all high alpine lakes and rivers contain these trout.

Simply locating waters that have good golden trout populations can be an effort in and of itself. Since this trout live in the most beautiful scenery in the United States, a day spent looking for or fishing for golden trout can never be wasted.

It’s About the Journey, Not Always the Catch

Even if you don’t catch any, for an angler looking to catch trout in a splendid and scenic environment, chasing this trout is the way go. It is hard to miss an Oncorhynchus aguabonita, as their name conveys.

These beautiful trout are golden in color, so they are hard to mistake for other types of fish. The Oncorhynchus aguabonita also has a scattering of black spots and a red striping along with its lateral line, belly and gill plates.

Since this trout are not very common, it is recommended that anglers who catch golden trout release them instead of eating them. If you are looking for a fish you can eat, try some brook trout instead.

Brook trout are usually found in the same waters as Oncorhynchus aguabonita are, but are not nearly as rare. Most agree they taste better too.

Where is the best trout fishing in California?

The San Joaquin Delta, running throughout California, this seems to be the most popular.

What is the trout limit in California?

General limits is 5 per day and never more than 10 in possession.

What is the state fish of California?

What is the largest trout species?

Where are the best places to fish in Montana?

Best places to fish in California?

How big are trout?

On average 6-7 pounds with some growing as large as 20 pounds, depending on the species.

This trout is truly a beautiful and unique species of trout. They are a lot of fun to catch, and getting to them in many cases is half the battle.

This trout is one of the more native fish species to California, yet it is also the most threatened.

If you decide to fish for this trout, it is highly recommended to practice catch and release. With proper conservation and catch and release by anglers, it is hopeful and possible for the numbers to begin to rise.

This trout can live up to nine years old but more common is six-seven years old. This limits the number of times the golden trout can successfully spawn. This also adds to their rapidly declining numbers.