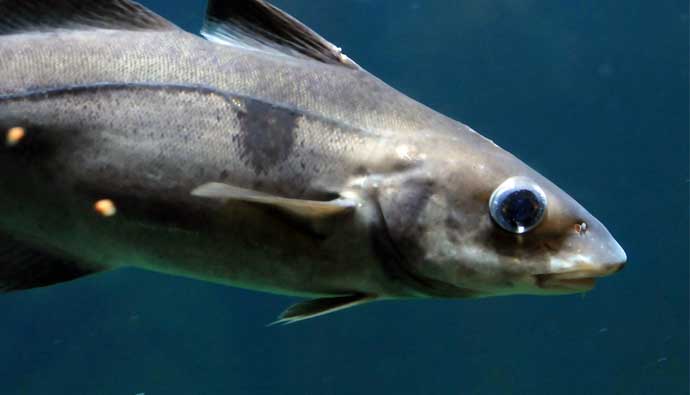 Haddock melanogrammus aeglefinus is a fun fish to target by drifting in your boat over some structure.

Whether you’re in the United Kingdom, Gulf of Maine, Georges Bank, or your local watering hole, this haddock fishing should be on your goal. Plus, if you’ve seen the recipes for haddock, you already know it’s a solid table fish.

Let’s figure out how to catch the big ones!

Haddock has a long and tapered body that is common in fish that belong to the cod family. The mouth is small and it has a wedge-shaped profile. What really makes this fish stand out is the ’Devil’s Thumbprint’ a dark blotch that lies above the pectoral fin and it also has a small barbell under the chin. This important food fish can be found in the North Atlantic Ocean, Gulf of Maine, and fisheries in northern Europe.

Also known as finnan haddie and scrod haddock, it’s is a fast-growing fish that can grow from 1 to 3 feet long at maturity and can live for 10 years or more. It doesn’t weigh more than 2 or 7 pounds fully grown.

Where to Catch Haddock

As a demersal species, it can be found swimming over rocky or shell filled substrates and juveniles prefer to remain near shore in shallow water. Both migrate seasonally as water temperatures shift. They move to deeper water when the water turns cold near the surface in winter.

Many anglers have success finding structure such as rocks or shipwrecks then drifting over them with live bait.

How to Catch Haddock

Haddock melanogrammus aeglefinus have small mouths and feed mostly on invertebrates and smaller fish. The best way to fish for them is with bait such as clams but small jigs can also be effective especially if you are swimming in the shallows.

These won’t attract dogfish either which may try and steal bait before they have the chance to get at it. Plus, since you will be trying to catch a fish that is sucking bait from the bottom, make sure your line touches the seafloor. Otherwise, they will just swim underneath it and snatch it off.

If you decide to use bait, use shellfish, ragworms or lugworms or fish such as mackerel, herring or even starfish. Fish close to the bottom of deep water off steep beaches or rocky outcrops where haddock shoals sift through soft sand in search of food.

If you use a live baitfish, just place the hook through the nose with the hook point facing upwards.

Haddock fish can be found year-round but it is more abundant in some spots than others. Summer and early Spring are considered the best times to fish for it especially in March and April when it is spawning. In some areas, the fish can be found in abundance in early June but it usually swims to deeper water at that time.

How to Clean Haddock

Before we jump into some haddock recipes, let’s first prepare the fish.

How to Cook Haddock

Now that we have clean haddock fillets, let’s use the following recipe for haddock to bring some smiles to your dinner table. As with any cod family fish, you know for sure the finnan haddie will deliver a delicious meal.

Q: Is Haddock a good fish to eat?

A: Yes, the haddock is among the best table fish to eat because of its high protein, low calorie, and low mercury content.

Q: What is the difference between cod and haddock?

A: Cod has a more mild flavor whereas haddock has a richer more pronounced “fish” taste. The texture on cod is thicker and firmer.

Q: What is the best haddock rig setup?

A: Big, orange teasers are considered to be the best when it comes to catching haddock since these can be tied with circle hooks that won’t snag smaller fish.

Q: What is the best way to drift bait for haddock?

A: If you are drifting bait to catch haddock chances are you will have difficulty touching the bottom. Use a braided line so that you can feel the instant when your line touches the seafloor and as you are drifting, leave the reel in free spool making sure your thumb is on the spool. Then let out the line slowly while keeping it taut. When a haddock bites, let out some more of the line and then lock in the reel to set the hook.

Haddock is an excellent table fish and since it travels in large, dense shoals, you shouldn’t have difficulty catching a few even as a novice.