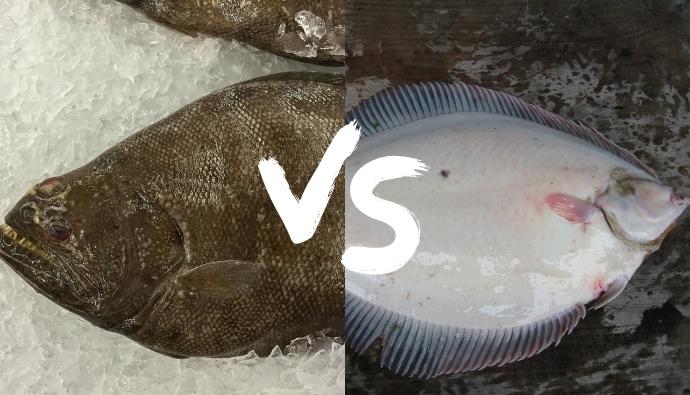 In a discussion about flatfish, flounder and halibut will always take center stage. This is because they are two of the tastiest and healthiest fish around.

As with most fish that belong to the same group and have similarities, telling halibut and flounder apart can be difficult for rookie fishermen. Interestingly, halibut is a flounder, but not all flounders are halibut.

This is because flounder is the general name used to refer to all kinds of flatfish, which includes plaice, sole, turbot, and of course, halibut. This use of name only intensifies the confusion surrounding halibut and flounder.

In this article, we’re pointing out the key differences between halibut vs flounder and how to identify them.

Halibut vs Flounder: What’s The Difference?

Halibut and flounder are two of the most popular fish among fish lovers worldwide. In this section, we will break down the difference between them, enabling you to recognize each species with ease.

The main difference between a halibut and a flounder can be broken down into three parts which are body shape, body size, and tail shape.

Before we go into the details about the key differences, it is important to note that there are only two main species of halibut which are Pacific halibut and Atlantic halibut. California halibut is a different kind of fish, so we will not include it in this comparison.

The body size is the first and easiest giveaway when trying to differentiate between a halibut and a flounder. This is because halibut happens to be a large fish, while flounder, on the other hand, is much smaller in comparison.

As a matter of fact, both Pacific and Atlantic halibut usually grow to be around 8 feet long, weighing about 400 pounds. In comparison, flounders weigh between 5 to 30 pounds at full maturation. As such, halibut provide a lot more meat for food, which explains why they are referred to as doormats or barn doors.

The problem with relying on size to tell these fish species apart is that they are usually similar in size as juveniles. This brings us to another means of identification which is body shape.

Due to being smaller, flounders have shorter bodies with their uniform fins giving them a round shape. Flounders usually have thick scales, while halibuts have smaller scales.

So when next you go halibut fishing, look out for pointed fins or round fins. The difference lies there.

Another way to tell flounder and halibut apart is through the shape of their tail. Most halibut have a forked tail with pointed ends, while flounders have rounded or flat tails.

The positioning of the eyes can also be used to identify if a flatfish is a flounder or halibut. One interesting thing about the whole flatfish family is that their two eyes are located on one side of their bodies.

They are usually born with eyes on either side, but as they lay more on one side of their body, their eyes migrate slowly until they end up on the opposite side.

Halibut are known to always have their eyes on the right side of their head. For flounders, their eyes can either be on the left side or right.

Are Flounder and Halibut the Same Species?

Halibut belong to the Pleuronectidae family, while most flounders belong to the Paralichthyidae family. With both species being members of the flatfish family, you can be sure that they have a lot in common.

They are both demersal fish that live at the bottom of seas and lakes, waiting for food. In addition, flounder and halibut are predatory fish that feed on sea animals, crustaceans, and other fish.

Flounder and halibut also have the same coloring, usually brown or mottled green with a white underside. Their skin color allows them to camouflage by adapting to the color of sand. Sadly, the Atlantic stocks of both flatfish are being critically overfished.

Where Do Flounder and Halibut Live?

The location to find flounder or halibut depends on the type of that you are fishing for. Halibut usually live farther north of every Flounder species. If you are looking for Atlantic halibut, the best place to find them is on waters close to Cape Cod.

The Atlantic halibut population is quite low, making them an endangered species. They can also be found in Greenland and northern Europe. Pacific halibut can be found on the Western coast of Alaska, all the way down to areas in Northwestern US.

Flounder are more widespread than halibut, so you can be sure to find them in areas from the Pacific Coast to Mexico. Summer flounder can be found in Massachusetts, Cape, Cape Cod, and North Carolina.

Does Flounder and Halibut Taste the Same?

A piece on flounder vs halibut is not complete without discussing their taste. The straightforward answer to the question is no, flounder and halibut do not taste the same. They have similar tastes but are different in makeup. While halibut has a firm texture and more meat due to its size, flounder is more delicate and flakier.

Halibut is also less fatty than flounder. As a matter of fact, halibut is less fatty than most fish that are edible. The firm texture of halibut and its fat content makes it perfect for grilling.

Flounders are slightly fattier than halibut with thinner meat fillets. As such, they taste best when baked or pan-fried. Flounder and halibut have incredible health benefits, such as lower blood pressure and improved cell and brain health.

In this section, we will answer some frequently asked questions about flounder vs halibut.

Is Flounder Healthy or Not?

The flounder is one of the healthiest fish species in the world. Along with halibut, they are classified as superfoods due to the number of nutrients that they contain. Flounder is a good protein source containing amino acids and omega-3 fats. It is also rich in vitamins and minerals, including magnesium, phosphorous, and vitamin B.

Is Flounder Related to Cod?

No, flounder is not related to cod. Flounders are Pleuronectiformes while cod are Gadiformes. As such, they do not even belong to the same order. However, both flounder and cod are bony ray-finned fish.

Is Flounder a Quality Fish?

Yes, a flounder is a quality fish that is not only delicious but also very healthy. It can also be used for a wide range of recipes by seafood lovers.

Is Halibut Just a Big Flounder?

Yes, halibut can be referred to as a big flounder. This is because flounder is the general name for most species in the flatfish family. Halibut are commonly referred to as right-eyed flounders. There are three major species of halibut which are Atlantic halibut, Pacific halibut, and Greenland halibut.

Undoubtedly, halibut and flounder are two fish that are loved universally by seafood lovers worldwide. The aim of this article was to provide a detailed explanation of the differences between the species.

Due to its lower fat content and bigger meat, halibut is the best choice. For people on the East Coast, there is better access to flounder, so it is better to choose that.