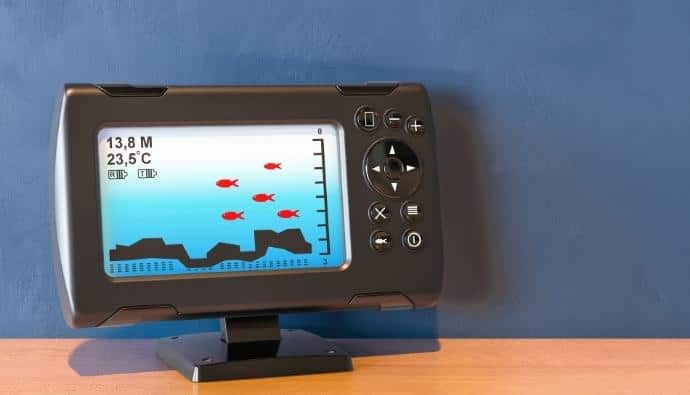 Contrary to popular belief, fish finders are not fish magnets. This is not the one trick pony, magic pill to help you locate fish that will bite as soon as your bait touches the water.

Instead, a fishfinder is a technical tool that helps you find a fix and finish the problem of having an empty ice chest. It helps you find the fish, fixate on their position, and finish by helping you to navigate close enough to get a solid cast in.

While fishfinders don’t bait your hook or reel in for you, they are an incredibly useful tool to any angler on a boat.

How do Fish Finders work?

Sonar. No, it’s not a made-up concept from Hunt for the red October or an ability that is exclusive to bats. Standing for sound navigation ranging, sonar sends Sound waves in pulses to locate its quarry.

These pulses are reflected back to the sonar device when they hit objects like vegetation, fish, or the bottom.

An object’s distance from the device’s sound source is determined by the time it takes for the sound wave to travel, strike the target, and then return to the source.

Both Dolphins and Bats use echolocation as a system which harnesses sound waves similar to this. The device can determine the depth of the object it reflected off with the help of sound waves.

It can also tell you how hard the objects are, determined by how strong the return pulse is.

A new pulse is sent out as soon as the first one returns. Sonars can send multiple pulses each second as sound waves travel approximately 1 mile per second beneath the water.

Anglers are better served by understanding the depth and hardness of the bottom which can be determined by returning sound pulses that are converted into electrical signals and then displayed.

Because sonar is sent out in waves, its movement is not linear. Instead, it occurs on an angle. Wide beams, which provide a broader picture, occur at about 40 to 60°, while narrower beams which provide a more exact location, occur at around 10 to 20°.

Fish finders display data that is often interpreted as if all the information they display is occurring directly beneath the sonar device. Basically, if a fish appears on the screen, it is incorrectly assumed to be right under the sonar.

As it turns out, the readings we see on our screens come from a much larger swathe of geography beneath our sonar.

To make matters more complicated, as you go deeper into the scan, the sonar gathers data from an ever-widening area because sonars scan in cones.

When your screen scrolls, it’s not always fish or movement.

Almost all fishfinders feed the video right to left. As you progress over terrain or come upon new geographic features, fish, or sub-surface obstacles, these appear on the right side of your screen and eventually go left as you move.

However, it’s essential to note that this is not always the case. When you are stationary, the sooner I will continue to send out waves. This constant feedback will continue to scroll the screen from right to left even window new terrain features are being covered.

This can provide the misconception that there are more fish or rain features in the area with no movement or that new fish have entered the sonar cone.

What are the more prevalent mistakes when utilizing sonar?

When stationary is, a single fish be mistaken for many. Because sonar provides a constant pulse and continues to scroll right to the left, a new fish may appear on the screen quite rapidly despite its being no more than a virtual clone.

To prevent this, look to see if there are any depth, size, or directional changes in the singular fish. This way, nobody’s heart will be broken if there are not four or five “monsters” lurking below.

Sonar is your friend, capable of telling you what the bottom’s structure looks like and how hard it is.

Sonar measures the time it takes for a sound pulse to return to its sensor and simultaneously the strength of the returned signal.

This allows anglers to determine how hard or soft the underwater objects are without getting hands-on. Weaker signals are generated by soft objects with lower density, while a stronger signal usually denotes a hard, high-density object.

In terms of color and brightness, your sonar display will give you a heads-up as to how hard the object is through a vivid color scheme.

The more vibrant colors denote a harder object, while the duller shades are indicative of weaker signals and, therefore, softer surfaces. When scanning the bottom, this can be incredibly important.

No, these golden arches aren’t McDonald’s, but I’m loving it because they indicate fish. While many novice anglers who purchased their first fishfinder keep it on the fish icons, this mode limits the amount of raw data that can be processed.

Instead, if you’re looking to maximize the fish finders, consider switching it to the mode which registers fish as blips on the screen, similar to other underwater objects.

Fish will show up as unique clips because of their oblong shape and swimming patterns. Usually, they’ll be caught by multiple parts of the Sonar cone, giving them a hooked, fingernail-like arch in the middle of the water column.

There are a few variations, however.

If the fish are stationary, they will instead appear like lines in the water column.

Fish that move through the entirety of a sonar wave will appear in a longer arch.

Fish that only make it halfway through the sonar wave will appear as half arches.

When it comes to determining fish size on a fish finder is girth. Wall side-to-side measurement often denotes movement; up-and-down is usually indicative of the thickness and size of the fish.

Thus, looking at how much space the fish takes vertically will accurately represent how large a specimen you have beneath your hull.

Who should buy a fish Finder?

Anyone with a boat looking to do some serious angling on a significant body of water should purchase a fishfinder.

Are fish finders complicated/hard to use?

No, many have apps that allow you to see and control aspects of the fishfinder from your phone. Nearly all models on the market today are user-friendly, easy to use, and easy to set up.

Is it worth the money?

Yes. Not only does it allow anglers to have a unique perspective underwater, locating both fish and obstacles, but some of the more recent models have GPS and location-saving abilities built-in, creating the complete fishing package.

Where will the screen be located?

The fishfinder screen is most often located next to the helm. This way, whoever is navigating the boat and controlling the throttles will have a perspective of what’s beneath.

The fishfinder screen is most often located next to the helm. This way, whoever is navigating the boat and controlling the throttles Will have a perspective of what’s beneath.

Fish finders are quite a useful asset for any angler on a boat that is looking to capitalize on whatever is beneath them. Understanding how they work, what visuals you will see, and what visuals represent is crucial to being able to maximize the capabilities of your fishfinder.

While it won’t bring the fish to you, it can help bring you to the fish, making for a much easier day on the water where the majority is not spent chasing, but rather catching. Good luck, and as always stay safe out on the water.

YouTube
Articles » Freshwater Fishing » How Does A Fishfinder Work?