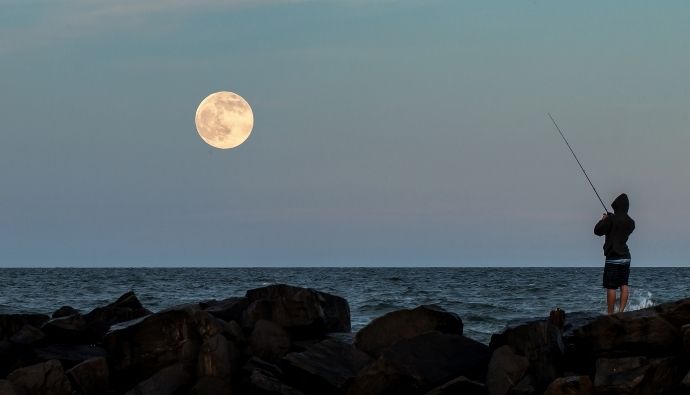 Fishing is a thrilling activity that deals with chances. We’re usually taught about the best angling gears and strategies in catching fish. Nonetheless, this does not fully guarantee success in a fishing trip.

Yet, this does not stop anglers from finding ways to determine the best time to catch fish. One popular notion is that catching more fish can depend on the phases of the moon and tides.

Does the reliance on moon phases and tides for successful angling hold water? Where does this come from? Does this improve our chances of catching saltwater and freshwater fish when you go fishing at night?

In general, how does the moon affect fishing?

Believe it or not, the idea of fishing concerning the moon’s position and tides came from an actual scientific inquiry in 1935.

John Alden Knight Jr. devised the Solunar Theory from his observations of fishing behavior relative to the sun and moon’s position. He used folklore stories, experiences from fellow anglers, and his angling observations to develop this theory.

This theory posits that the gravitational force of the sun and the moon affects all living organisms. In this case, the moon’s gravitational pull has a more significant effect.

How is this related to the feeding behavior of fishes? Knight noticed that observable fish activity occurs more at specific parts of the day, which, in turn, also entails more observable activity.

Knight further supported this theory through the use of Solunar Tables. These consist of four timestamps, predicting the “major” and “minor” times for fishing. Fish activity is higher at “major” times when the moon is directly above or opposed to our position within the globe.

It is then considered “minor” if the lunar place is 90 degrees longitudinal on our coordinates.

Major and minor fishing times differ from day to day. It’s also possible that lunar angling is different from one location to another. Fortunately, there are Solunar Calendar websites that help in predicting the best fishing times for you.

Tides are also factored in, considering the relationship between waves and the relative lunar position. It means that high tides occur when the moon casts overhead or opposite our location, and low tides at a 90-degree longitudinal place.

Another element that anglers factor in when using Solunar Tables is the days during a new moon or a full moon. Yet, anglers are split between fishing during a full or new moon for different reasons.

Anglers that rely on Solunar Tables take note of particular periods or “peak times.” In theory, fish behavior is more observable, and fishing is at best during these periods.

Listed below are the known peak times during fishing days and lunar phases, as seen on the Solunar Table:

“Major” Times During The Day

Two timestamps indicate the “major” times during the day when fishing is best. One of which is during the early morning hours before or after sunrise, and the other during nighttime.

High tide levels occur at times during the day when the moon shows up overhead our location. During this time, ocean currents rise above normal levels, which means that fish are more active.

In addition, the greatest tidal currents occur during a new or full moon phase. These are the times of the month when fishes are more observable on coastal bodies of water. Those who prefer to bait big fish usually go surf fishing during an actual day of high tidal flow.

Anglers are usually split between fishing on days of a full moon or a new moon. Some say that fish species, including bottom feeders like largemouth bass, are suitable for catching when visible baits.

Meanwhile, Captain Dave Hansen of YourSaltwaterGuide.com insists that fishes tend to move away from more during a full moon, making it not suitable for angling. Catching lobsters, on the other hand, are more recommended when there’s a dark moon.

Alternatively, those who don’t want to fish directly on a full moon day may decide to go on days before a full moon day. Some anglers cite instances when increased activity is evident on days leading to a full moon.

How Reliable Is Moon Fishing?

The Solunar Theory follows a particular fishing strategy that follows the lunar calendar. Yet, in reality, there are different perspectives on how the moon affects certain fish species.

Meanwhile, other species are found not to follow specific lunar patterns at all. The fishing behavior of certain species is also not the same on certain lunar phases.

For instance, experts say that freshwater species such as largemouth bass have increased activity when the moon’s light is present. However, another professor noted that the lunar cycle does not affect the chances of catching bass. This is also the case for the Marlins, whose catch rates are relatively consistent when looking at the numbers.

This is also the case for Mahi. Capt. Dean Panos (Double D-Charters) and Capt. Trosset and Raguso (Key West) said that catching these species is ideal on a full moon.

On the other hand, Paul Michele (Navionics) noted that tuna is also active in feeding during new moons. Swordfishes also feed more in new moons, but research biologist Scott Aalbers said that Atlantic swordfishes tend to be more involved in full moons.

There are various perspectives from experienced and expert anglers on the appropriate time to bait big and game fish. However, if you’re following the lunar cycle for the best fishing period, the best thing that you can do is to observe the conditions yourself.

Anglers rely on the Solunar Theory in following the lunar cycle for fishing. There’s no certainty on its scientific merits.

However, anglers have since testified for the theory’s effectiveness in catching saltwater and freshwater fish on a particular moon phase.

Nonetheless, the real test for anglers is the strategy and patience in catching treasured fish.

You may follow a specific moon phase, such as full moons or looking for high ocean tides, but patience is still an important trait. It’s also vital to just go angling whenever possible and observe fish behavior for yourself.

YouTube
Articles » Freshwater Fishing » How Does the Moon Affect Fishing?