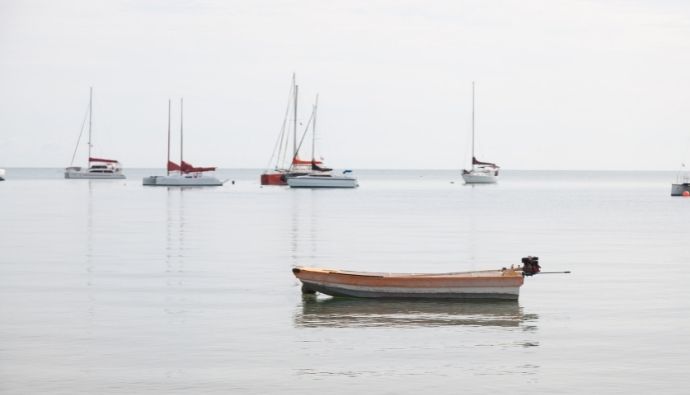 Today, we will talk about how to catch big fish on a small boat with Zac Mckenzie. Check him out on Instagram at @stackimages.

How did you get into catching big fish on a small boat?

Zach started with spearfishing, got into hunting, and then fishing for big game fish. So he’s targeting marlin, tuna, dolphin fish, and other big pelagic fish.

He got hooked to fishing when he and his friends caught marlin. Because of this, he bought a boat. He’s had smaller boats but his current one is about 5.4 meters (17.7 ft boat) with a 115-liter fuel tank underneath the floor.

Are smaller boats up to the task?

Zach was pretty confident with smaller boats. For him, fuel was one of the big sellers, and the shape with the nice big sides, deep V, and something that could handle fishing.

Smaller boats are cheaper than big ones. Zach got his for around $20,000. The boats worth $200,000 are catching the same sort of fish you can catch with a small boat. He has caught over a hundred kilos of marlin with just his small boat.

He explained that they had caught tuna of up to 70 kilos. It is very doable in a small boat. And if you’re on a budget, you can buy second-hand rods and reels.

As for trolling speed, you can find tons of information on YouTube. So for marlin, Zach goes about six knots, and for tuna, he goes about eight knots. You can not keep it exact all the time, but that is Zach’s rough speed for those.

And for marlin, he just run 8 to 10 inch skirted lures. He likes to do different colors, and he does get a bit superstitious.

He has got his lucky rod with his lucky lure and his lucky spot. And it is the one that goes off more than any others, but Zach likes to do a range of colors trying to spread them out.

Are outriggers required to catch big fish on a small boat?

Zach explained that he had run with outriggers, and they helped, but he just has not had the money to buy decent ones so he got rid of them.

Instead, he bought two-rod holders because he’s got a bar that runs up the boat. He then puts the rod holders out at around 60 degrees. The rods stick out the side of the boat and they act as small riggers.

How close or far should the lures be on a small boat?

According to Zach, it does not matter if they are really close or far back. Marlins have taken them either side, but he usually just run skirted lures for them.

For tuna, he tends to run hard body Halco lures or profidgie lures and uses a range of colors to mix it up. Compared to marlins, he runs them further back for tunas.

While fishing, Zach looks for birds and temperature breaks. So if there’s a hot and cold current, just zig-zagging in and out of that hot and cold, take a nice big turn so you don’t tangle your lures.

This is especially true if you’ve got two lines, and they keep twisting until they’re all tangled up. So nice big turns and slowly zig-zag out of that hot and cold water.

And with your upwellings and downwellings, if you are cutting in and out of that zero line, then that is going to be the area you should spend your time dragging the lures behind the boat.

When should you start dropping lures off?

Generally, you can launch your boat and find the edge of continental shelves. Before that edge is where you should drop your lures off or if you see bait in the water.

So, if you are marking bait balls, there is a good chance there may be a fish amongst them as you are going around. So you can drop the lures in there.

According to Zach, “I went out with my brother-in-law and we were only, when the water changed. It went from green and cold to blue and clear. And I started seeing bait and birds and things. And I was like, mate, drop them in early.”

So they put them all in and in less than five minutes, they had a 65-kilo yellowfin hooked up, and they were not that far from shore.

For him, he is just reading it, and he has been out with quite a few different guys now, and they all run things a little different. Every boat is different so you can experiment and find which works for you.

How many people should be on the boat?

As for the number of people on the boat, Zach usually runs two to three people. One person on the ride. One person drives the boat and one person is ready to leader. And once they click the boat out of gear, that person will gaff the fish.

Ideally, everyone knows their job before the reel goes off. This makes it easier to catch big fish on a small boat.

Communication, especially in a small boat, is vital because you are all on top of each other. You got to say, “move over here so I can get in there.” This makes everything go seamlessly and perfectly.

How often do you catch fish on a small boat?

According to Zach, he catches one big fish in three trips. But some guys go out and catch these big fish all the time and then other guys might go ten trips and get nothing.

Catching big fish on a small boat takes a lot of time and money. Game fishing is a costly way to catch fish. It’s boring for a long time.

But when it does happen, it’s magic.

It’s all worth it when that reel does go off and then you see that huge fish right at the boat. It’s just long times in between fish generally.

For Zach, he has caught a big fish nearly as long as the boat – tails up on the bait board, and the bill is up near the steering wheel. It’s epic.

What rods and reels should you get to catch big fish on a small boat?

Zach explained that he’s got a few different reels – some Penns and Shimanos. But the most common one everyone uses is the Shimano Tiagra.

He further explained that he’s got a cheap, small setup. For instance, he has got a small boat and smaller reels.

For him, going out and catching grander is probably not going to be super feasible for this kind of setup, but you can still catch big fish.

Catching big fish on a small boat and a small setup is possible. You just got to be patient but it’s all worth it.