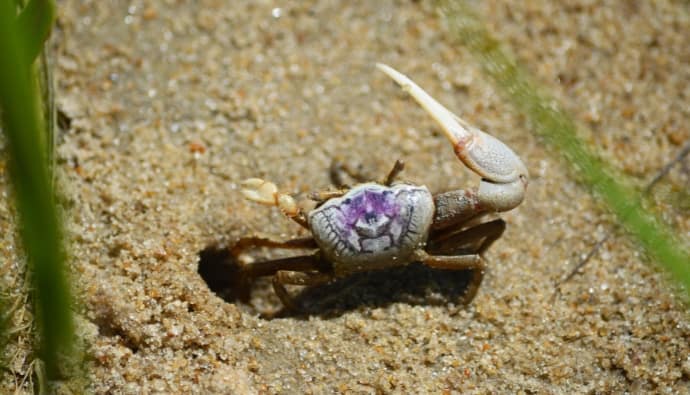 Fiddler crabs are tiny animals that feed on algae, fungi, microbes, and other decaying detritus. You can catch them through invasion, burying a bucket with treats, using a net, or using fiddler crabs roundup.

Fiddler crabs are edible and make the best live bait to catch sheepshead, snook, tarpon, redfish, and black drum. During summertime, you can find their colonies floating on water and along the shores. However, these little treats are not prevalent during winter, and you have to find a way to trap them.

Where Can You Find Fiddler Crabs?

You can easily spot fiddler crabs on muddy shorelines and soft sandy beaches. However, locating their colonies during high tide or fall can be quite hectic because they usually hide in small holes at the shore. During this season, the best place to look for fiddler crabs includes grass flats, muddy banks, rocks, saltwater marshlands, tree limbs, mangrove trees, and docks.

Fiddler crabs live in a colony and have interesting behavior. The males have oversized claws that help them mate, dance, and fight. Once you locate the colony, catch as many fiddler crabs as possible because you’ll need a good amount, especially if you want to use them as sheepshead bait.

1. Catching Fiddler Crabs Using a Shovel and a Bucket

This is the easiest and simplest method because you only need a shovel and a bucket to catch fiddler crabs. Follow the steps below:

Step 2: Make a hole. Make a hole and ensure it’s deep enough to fit in your bucket.

Step 4: Backfill your bucket. This step helps the fiddler crabs to enter your bucket easily.

Step 5: Hide. These little creatures won’t show up if you’re still there. Leave for about forty to sixty minutes.

Step 6: Collect your bucket. At this time, your bucket will probably be full of crabs. Correct your bait and prepare to go tarpon or sheepshead fishing.

Using a cast net works best during summer and low tides. Those who want to use this method to catch fiddler crabs can follow the steps below.

Step 1: Carry a fine-meshed cast net and head to where the crabs hang out. You’ll likely find them on the mudflats feeding.

Step 2: Locate the largest fiddler crab colony and throw a cast net on them. Ensure your cast net is not torn since the crabs can escape through the holes.

Step 3: Remove the net before some fiddler crabs hide in the grass.

Don’t worry if you don’t have a cast net to catch fiddler crabs. You can improvise a fiddler crabs roundup to catch these little baits. This method is easy and quite straightforward. Follow the steps below.

Step 2: Attach the poles to the elbows and cut some holes in the bin. The fiddler crabs will use these holes to enter the bin.

Step 3: Head to where the crabs hang out and place the roundup on the ground.

Step 4: Guide the fiddler crabs where you want them to go, and they will find themselves in the plastic bin.

Step 5: After you have collected enough, dump these fiddler crabs in a bucket. You can then carry them on your next fishing trip.

Not sure what home invasion means? Fiddler crab home invasion is a method whereby you catch fiddler crabs by digging a shallow hole in the mud and sand to collect a fiddler crab. You can use a shovel to make your work easier. This method is easy to implement, but it can take you some hours before you collect a bucket full of these small crabs.

How to Use Fiddler Crabs to Catch Sheepshead

After collecting enough fiddler crabs, the next thing is to go sheepshead fishing. Catching sheepshead is quite easy, and you can use the method below to catch more fish.

Step 1: Get your rod and reel. Ensure you get a quality fishing rod and hook to avoid breaking when fishing.

Step 2: Make a sheepshead rig using a swivel and a fluorocarbon leader line.

Step 3: Attach a live bait on the hook on the opposite side.

Step 4: Once you finish making your fishing setup, keep it in the water and fish sheepshead, redfish, or for catching convict fish.

Catching fiddler crabs is quite easy as they like crawling in colonies. You can catch them using your hands, a net, burying a bucket, or even by rounding them up. Ensure you preserve them in a bucket half-full of wet sand so you’ll have a great live bait to catch red drum, sheepshead, or your preferred predator fish.