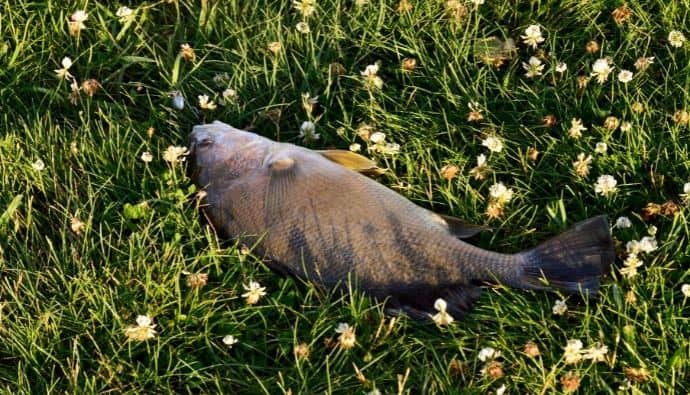 Before he left California for quite some years, he was focused on fishing the surf, and one of his favorite fish to chase was spotfin croaker.

Long story short, when Dave moved out to Michigan, he was very happy to fly fish the Great Lakes. That’s when he stumbled upon the freshwater drum.

He quickly looked this up and tried to figure out what it was. People called them “sheepshead.”

According to Dave, freshwater drums are considered trash fish. For the most part, most lakes have them. They do not even list them on the species list. They are very rarely talked about.

But out in Manitoba, Canada, this is a huge game fish. Quickly, he became obsessed with this untapped game fish in the Great Lakes region and had been pursuing them since he moved out there for 8 years.

What is the pull like compared to the Spotfin Croaker?

These are rod-breaking fish. Dave caught them up to the teens pushing maybe 15 pounds plus.

These fish pull hard, big head shakes which is different from the spotfin croaker in the surfs. Freshwater drum are a little lazier, they have bellies, and they are a little more droopy.

But they have all the hallmarks of a saltwater fish, bottom-feeding kind of a drum-looking fish. So they can run and they can pull depending on their mood. They are all different.

Some really big ones in spring that are just fired up. They fight like hell.

What’s your setup for catching freshwater drum on the fly rod?

Dave explained that, for the most part, the freshwater drums could be targeted easily. With the fly, they are opportunistic feeders. So many of Dave’s saltwater techniques come into play when catching crab and small weighted flies crayfish.

He further explained that they do a lot of blind casting for these fishing in the fall. They find spots where they come in to spawn.

You will get them thick. You can have days on the water where you are catching drum back-to-back hundred fish days between two people. They are just veracious.

Dave uses sinking lines, kind of weighted bottom bouncing flies. He is just ticking it along the bottom, and they will just get railed as it will just stop and you have a fish on.

But Dave’s favorite way to chase them is with a flat skiff.

He tries to catch them with a sight fishing approach. You have one of the biggest, if not the biggest delta in America that comes out of the top of this lake, and all these flats constantly flowing as a result and it is a great habitat for fish.

Dave has a 16-foot boat, but he mainly uses it as a skiff with a polling platform. It wasn’t easy to learn, but after watching folks, he got the hang of it.

But getting his sea legs out there on the flats and learning to chase these fish has been just a wild and fun thing to do.

They have also been doing that with floating line casting platforms. For Dave, it is a team effort. For instance, he says, “You are stocking the fish; you are seeing it several yards away creeping upon them. It becomes like delicate pursuit.”

They act a lot like hermits. Therefore, if you do a wrong presentation, your cast hits the water, and the fly makes a plop too close to the fish. They are gone and spooked.

So, it takes a lot of skill, and there is a big learning curve, but it is really fun.

These fish are very curious. They will drive you nuts, but it has been a unique experience for Dave to find a virtually untapped fish and learn how to fish for it, and develop a game that no one is not doing.

Does trolling motor keep you in the same spot?

When he is up on the casting platform, he uses the trolling motor to steady the jon boat.

So, whoever is with Dave on the boat, standing on the platform, holds the pole, but not manipulating the boat with it, and becomes his second set of eyes. It is probably motors mainly for him to fish as well.

He has as much fun, if not more, standing on the platform and not even fishing. It is vicarious fishing at its best. You do not get the lows; it is all highs because you are not making the bad cast. You are the one just calling the shots or at least assisting.

If you are out in the Midwest and like fishing in general, give the drum a shot. They are a worthy fish to pursue and worthy game fish.