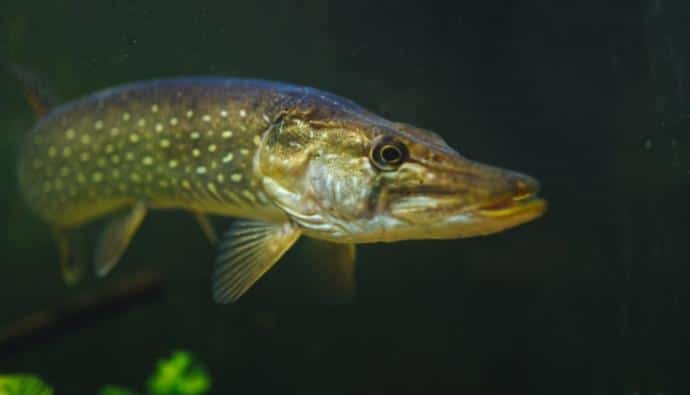 Pike is a species of fish that is known to be a big prize fish among anglers. The size of the pike, as well as their aggressiveness and intelligence, make them stand out.

They always put up exciting fights, making them the favorites of pike fishermen.

Aside from their size and strength, another factor that makes northern pike desirable to pike anglers is their availability all around the year.

Pikes can be caught in any season of the year, provided you know how to go about it. In this article, we will highlight everything you need to know about how to catch pike in the summer.

Fishing for Pike in the Summer

It is important to understand pike behavior in the summer in order to know the strategy to employ in catching them. Due to the warm weather around this time of the year, it is usually the trickiest period for catching pike.

In spring, you will be sure to find pike in shallow water. In winter, they are typically lethargic, making them easy to fish.

However, they find their way to the deeper waters. This, combined with the decrease in oxygen levels, makes catching pike in the summer a bit difficult.

It is essential to look out for pike safety when fishing in the summer. The lower oxygen levels usually result in a longer recovery period after fighting, as well as deep hooking.

As such, it is crucial to use techniques that cater to their safety.

Best Time to Fish for Pike in the Summer

Due to the warmer temperatures, pike typically feeds during the low light periods in summer. As a result, the best time to fish for pike in the summer is at dawn and sunset.

These periods are the coolest time of the day, and pike are sure to be most active, going into a feeding frenzy.

Best Place to Fish for Pike in the Summer

It is usually safer and more productive to fish large water bodies in the summer. This is because these fisheries have lower temperatures and higher oxygen levels than shallow lowland rivers.

During summer, pike typically moves to deeper waters, and shallow rivers do not provide that.

Tips for Fishing for Pike in the Summer

Fly Fishing and Fishing with Lures

Casting live or dead bait is a bit problematic, as pike usually inhale bait in this fishing season. This can result in deep hooking, which leaves them at the risk of injury or death during the warm temperatures of summer.

Use Bigger Flies and Lures

For summer pike fishing, you can choose from a wide range of baits which include spinnerbait, streamer, jerk bait as well as weedless spoons. It is, however, important to increase the size of your flies and lures for the best result.

The warm temperatures change the tactics of big pike, as they target one big meal before going moving to the deeper waters to rest. Small lures and flies will only attract little pike, and most anglers only want the large prize.

In addition to your lures and flies, ensure to go along with a complete tackle box that consists of lines (a braided line is a good option), steel leaders as well as reels.

The bright sun and warm temperatures of summer alter the behavior of big pike from how they act in winter and spring. In summer, they usually hunt during the low light periods, which occur at dusk and dawn.

During these periods of the day, they move to the shallow areas of the water, hiding under weed beds that protect them from light.

It also puts them in a prime position to catch their unsuspecting prey. This is the best time to catch the predatory fish using the shallow-to-deep presentation method.

This will enable you to cast your lures accurately. A sink tip line is best for pike summer fishing at midday, as it enables your lure to get to the required depth.

While you might not catch many pikes when fishing deep, you might get a few giant pikes. Once the sun sets, you can move back to the shallow waters to fish the weed beds.

Dehooking the pike quickly is key to keeping them alive in summer. As mentioned earlier, pikes are known to swallow baits in summer, thereby getting themselves hooked.

This leaves the pike anglers with the responsibility of dehooking them. The oxygen levels affect their strength, so it is important that you do not leave them fighting for too long. Tools for dehooking pike swiftly include:

Jaw Spreader: With a jaw spreader, you can open their jaws in one motion and get the hook out without getting hurt.

Long Needle Nose Pliers: Long needle nose pliers come in handy in situations when the pike swallows the bait deep into their mouth. This set of pliers will help you to reach and cut off the hook without having to put your fingers in the mouth of the pike.

Rubberized Net: Rubberized net provide a safe release for pike. They allow you to remove the hooks without taking the pike out of the water. The rubber coating also ensures that the fish’s slime stays intact.

After playing with the pike or taking pictures of them, it is left to release them back into the water. Allow the pike to rest for a short while in the net. This will enable you to determine the state that it is in.

The big fish will either be mellow or active and trashing around. If it is trashing around, you can simply slip it out of the net. If the pike is mellow, on the other hand, you need to gently help it regardless of its strength.

Do this by cradling it in your hands, making sure to hold the tail, and support the belly. Rock the fish and allow water to move on its gills. Do this for a short while, and the pike will regain its strength and kick away.

Fishing for pike in summer requires being gentle and strategic. You need to go with the right fishing gear in order to avoid hurting the pike at this time.

It is also imperative that you fish using the right techniques at different periods of the day. Most importantly, ensure to wear protective gear and take your camera along in order to take pictures of your catch.

YouTube
Articles » Freshwater Fishing » How to Catch Pike in the Summer