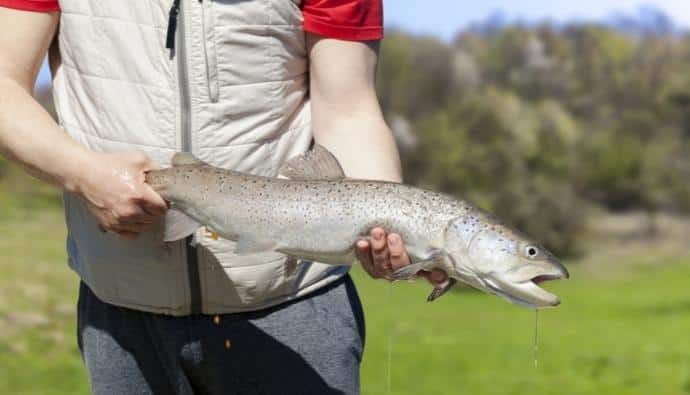 The Great Lakes are home to some of the most beautiful and bountiful fish. Among these, the salmon is a highly coveted catch.

They are known for their impressive size and fight and their delicious taste. Catching a salmon in the Great Lakes is an unforgettable experience.

However, catching a salmon in the Great Lakes is not always easy. These fish are notoriously elusive and often hard to find. But with a bit of patience and know-how, any angler can succeed in salmon fishing.

Salmon are not native to the Great Lakes. They were first introduced in the early 1800s by settlers looking for a new food source.

This is what Lyle Gayder, a guide in Ontario Niagara and also the host of the love of fishing podcast, said, “Salmon had been introduced to the great lakes, and it’s sort of something that a lot of people from outside of my area may not know.”

The salmon brought over were Atlantic salmon, and they were released into lakes Erie and Ontario. While some of these salmon did manage to spawn and create populations in these lakes, they never achieved the same level of success as their Pacific cousins.

This is partly because the Great Lakes are much colder than the Atlantic Ocean, and the salmon could not adapt to the change in temperature.

“But we have really amazing both Chinook and coho fishing in Lake Ontario, Lake Huron, and Lake Michigan if you’re fishing on the stateside, and those fish were introduced in the late sixties, early seventies and have taken hold as one of the primary game fish to target in the great lakes,” Lyle Gayder said.

These fish are much better suited to the cold water, and as a result, they have thrived in their new environment.

Today, you can find four main types of salmon in the Great Lakes: Chinook, coho, pink, and sockeye.

Chinook salmon are the largest of the four and can reach weights of up to 50 pounds. Lyle Gayder said, “I love catching Chinook because they’re big and fight hard. Sometimes we see Chinook up to 40 pounds in Lake Ontario.”

They are also the most sought-after due to their high-fat content and delicious taste. Coho salmon are the second largest, reaching weights of up to 30 pounds. They are not as fatty as chinook salmon, but they are still considered very good eating.

“But I also have a soft spot for coho because they are great table fare,” Lyle Gayder said.

Pink salmon are the smallest of the four, only reaching weights of up to 10 pounds. They are not as popular as the other three types of salmon, as they are not as good for eating.

Finally, sockeye salmon are the rarest of the four and can only be found in lakes Huron and Superior. They are the second smallest, only reaching weights of up to 8 pounds.

How To Find Salmon in the Great Lakes

Now that we know a little bit about the different types of salmon found in the Great Lakes, let’s look at how to find them. The best way to find salmon in the Great Lakes is to look for areas where food is abundant.

Another good place to look is along drop-offs, as the change in depth can concentrate baitfish. Also, salmon will often congregate near structures such as docks and bridges, as these provide shelter from predators and offer an easy source of food.

How To Fish for Salmon

You’ve found a spot that looks promising, and now it’s time to start fishing. But what’s the best way to fish for salmon in the Great Lakes?

Trolling is one of the most popular methods for salmon fishing in the Great Lakes. It involves trailing a lure or bait behind a boat and waiting for a fish to strike.

Trolling is an effective method because it allows you to cover a lot of ground and increases your chances of finding a concentration of fish.

In contrast to trolling, casting involves standing on the shore or in a boat and casting your line into the water. This method is often used when fishing from a dock or pier.

You can use several different techniques when jigging for salmon, but the basic idea is to vertically bounce your lure or bait up and down in the water.

This method is often used in deeper water, as it allows you to target fish that are holding near the bottom.

Drift fishing is a good method to use when fishing in areas with a strong current. It involves anchoring your boat and casting your line out into the current.

As the current carries your line downstream, it will also carry any fish in its path. It allows you to fish an area without moving your boat and can be very effective in areas with a strong current.

When most people think of fly fishing, they picture trout fishing in a river. But did you know that you can also fly fish for salmon? Fly fishing for salmon is similar to trout fishing, but there are a few key differences.

If you want to try your hand at fly fishing for salmon, do some research and talk to an experienced angler before you get started.

Peak Season To Catch Salmon in the Great Lakes

The best time to catch salmon in the Great Lakes is during the fall, when they are preparing to spawn. Salmon will enter the rivers that flow into the lakes in late August or early September.

This is an ideal time to fish for salmon, as they will be concentrated in a small area and will be actively feeding.

“There is a prime season for trolling, which would be from about April through the middle of September here in the Niagara region. You can also fish the fall run. We don’t have a spring run, we have a fall run, and that’s when the fish enter the tributaries, and you can catch them,” Lyle Gayder said.

If you’re looking for smaller fish, the best time to catch them is during the summer months. This is when they are most active and can be found in large numbers near the shore.

Catching salmon in the Great Lakes can be a challenge, but there are a few things you can do to increase your chances of success.

Use the Right Gear

Make sure you have the right gear before you go salmon fishing. You’ll need a sturdy rod and reel and a good quality line. If you’re trolling, you’ll also need a downrigger. A downrigger is a device that mounts to your boat’s side and helps keep your line in the water.

Use the Right Lure or Bait

The type of lure or bait you use can make a big difference in whether or not you catch salmon.

Salmon are attracted to bright, shiny objects, so lures that mimic the appearance of baitfish are often effective. Some popular salmon lures include spinners, spoons, and flies.

Lyle Gayder said, “I’d say in general spoons are the most consistent bait when we’re out trolling. Either running those spoons off a down rigor or something called a Dipsy diver, which is a directional planting sinker.”

When fishing for salmon in the Great Lakes, it’s important to target the right location. Salmon will often congregate near deepwater areas, where they can find food and shelter.

Some good spots to fish for salmon include the base of a dam or any area with a strong current.

Catching salmon can be a waiting game, so it’s important to be patient. Give yourself plenty of time to fish, and don’t get discouraged if you don’t catch anything right away.

When fishing from a boat, always wear a life jacket and ensure the boat is properly equipped with all the safety gear.

Fishing for salmon in the Great Lakes can be a great experience, but it’s important to be prepared. Make sure you have the right gear and know where to target salmon. Most importantly, be patient and stay safe.

With a little bit of knowledge and effort, you’ll be catching salmon in no time. Reeling in a big one will give you a thrill that will last long after you’ve left the water. So, get out there and have some fun.

“If you’re listening and you haven’t ever caught a salmon, or you haven’t chased them in the great lakes. I definitely recommend giving it a try. It’s thrilling, it’s early mornings, and it can be high seas, but it’s an experience that is really like no other on the great lakes,” Lyle Gayder said.