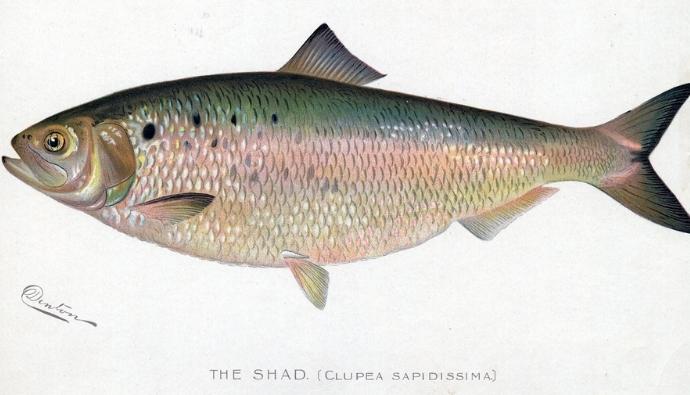 Shad are small, silvery creatures that are often used as bait for larger fish such as bluegill, bass, catfish, and more.

Though they spend the majority of their time in the ocean, these fish will swim hundreds of miles upstream to spawn and can often be caught in freshwater streams and rivers, occasionally lakes, if they have been introduced there.

In this article, we cover how to catch shad along with where to look and the gear you will need.

Where to find shad

The majority of the time, shad are caught upstream in coastal rivers or waterways that connect two coastal rivers during the spawning season. These fish will travel hundreds of miles from the ocean into freshwater offshoots to spawn.

Though they have a poor man’s salmon moniker, shad don’t die after they spawn. Instead, in most cases, they return to the ocean until the next spawning season.

Often, anglers will catch shad as they swim off stream towards their spawning destinations. These fish are usually caught within 30 feet of the bank as they use it to buffer some of the current as they swim upstream.

They prefer water between 4 to 10 feet deep and will often use the underwater structure as buffers from the current as they move up a waterway.

Shad tend to swim towards shore, so retrieving inwards off the bank is always a good start. Angling off of islands or bends in a waterway makes it so that the current pulls the shad towards the shoreline.

Additionally, shad can be found resting behind structures in the waterway, such as islands, docks, or rock formations. Casting downstream from these and retrieving past the shad is an easy way to catch these fish while resting.

When to fish for shad

Shad spawn from late spring to early summer, so the end of April through early June is the best time to hit the water in search of shad.

During fall and winter, shad can be found traveling back to or in the ocean, waiting out the colder weather.

The best time of day to angle for shad is widely considered to be a few hours before sunset. During this time, the shad are attempting to get one last meal in before hunkering down for the evening.

However, during spawning season, the vast majority of the day can be productive when angling. This is because shad will not eat during spawning itself, so to trigger a bite, anglers must incite it through a presentation, annoying the shad into taking a chomp at the hook.

When fishing for shad with a rod, the name of the game is finesse. Lightweight, long rods, either spinning or fly, works best, outfitted with the lightest pound test line available in your area.

Size one or two barbless hooks work well, as often you will have to throw back the shad due to them being the incorrect size.

Flies, beads, and darts work well when fly fishing for shad. Brilliant reds in orange are best for these, as they stand out well in the water column.

Spinner baits are best cast from shore and worked back towards the angler, as they can catch shad on their approach coming out of the current.

Spoons are the best lure to use when angling from a boat for shad. Cast upstream from a boat, anglers can hit shad sheltering out of the current behind rocks and structures on a medium retrieve.

Bends in a moving waterway with a strong current are the best locations to shore fish for shad. Anglers can capitalize on the jutting land into the current, where shad will seek shelter and follow the bait inwards.

Shad tend to swim in single file patterns, meaning if you locate one, try to locate the second and then determine the trajectory. Casting in front of this line is your best bet for success, as often, they will not turn into the current to chase food.

Once you find the line, keep fishing that same location as there are usually more than two in the conga line to spawning.

If one fly or lure is not working, switch it out. Shad may not be hungry that day or maybe spawning, and it will take a larger, more aggressive lure to elicit a strike out of them.

Shad are some of the most common baitfish throughout the Eastern and Southeast United States. It makes up a good chunk of freshwater fish’s diet, starring the shad spawning season.

They travel out of the ocean and hundreds of miles inland through freshwater rivers and streams to reach their spawning location. Anglers with the right equipment, techniques, and lures can easily catch plenty of these bait fish and move on to the real monsters.