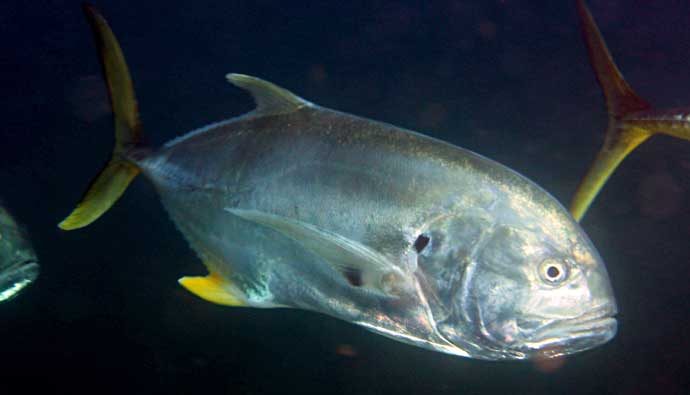 If you are looking for a unique looking fish that is prized by anglers, you need to fish for the jack crevalle fish.

It is also known as jackfish, toro, crevalle, and trevally, and a Pacific version of this fish also exists. Both species look almost exactly alike and both are tough to catch.

Both jackfish species are bluish-green or greenish-gold in color on the back with a yellowish or white underbelly. The body is deep and compressed with a rounded profile and it has a largemouth. The only thing that distinguishes a Pacific crevalle jack from a crevalle jack is the number of scutes – the former has 42, while the latter has 35 at most.

The jackfish young swim in large to moderate schools of fish that can also contain horse-eye jacks. It can withstand highly saline waters and can often be found around coastal areas of brackish water. Smaller ones can also be found around muddy bottoms that are about 130 feet deep underwater.

Jackfish can be found along shore reefs, harbors, and protected bays. Smaller ones can be found over muddy bottoms in very shallow water such as rivers and estuaries. Adults swim deeper at around 130 feet underwater but move to cooler and deeper water in summer.

Look for the fish when it is feeding. Crevalle jacks will often corner baitfish on the surface and start a feeding frenzy that can be seen from the distance.

How to Catch Jack Crevalle

Like most jacks, the crevalle variety is notorious for putting up ferocious fights. This makes them excellent for light tackle fishing. Most are caught by anglers who are trolling and casting for other fish with both artificial and natural bait. You can also use spinning, fly-fishing or surfcasting to catch this fish with live bait such as pinfish or mullet.

If you use jack crevalle lures, make sure that you retrieve them without pause. Jacks can lose interest in anything that doesn’t act. Increase your chances of catching one by fishing for this fish at first light. As the day breaks, jacks rush into the shallows to trap small baitfish between them and the land.

That is the best time to use artificial lures that look like small fish. Use a heavy silver spoon or soft plastic that looks like herring or sardine to make them bite.

If you’ve caught a bunch of jacks using the rod and reel, then it’s time to feed them some steel. Grab your speargun of choice and take a shot!

Jacks use coastal estuaries to spawn and grow up in and can be caught inshore all year round. Most are 10 to 12 inches long during this time which makes for great sport especially if you want to bend the rods. You can find bigger ones inshore during the fall when the mullet are migrating in large numbers.

How to Clean Jack Crevalle

How to Cook Jacks Fish

I’m often asked, “Are Jack Crevalle edible?” Yes, they are!

If you’re ready for a jack crevalle eating guide, here you go!

How big do jack crevalle get?

Jack crevalle can grow up to 1 to 2 feet in length and can weigh over 10 pounds.

Do jack crevalle have teeth?

Jack crevalle fish have strong teeth and powerful jaws. If they cannot crush a plug and escape, they will break the line.

Where can jacks be found?

The jack crevalle can be found in estuaries or rivers in very shallow water. Large jacks can be found 130 feet below the surface around coral reefs or over sandy bottoms hunting for crustaceans.

What type of bait is perfect for jackfishing?

Use smaller size bait if you are fishing for jacks inshore and use larger ones if you are looking for them offshore.

Can you eat jack crevalle?

This fish can be toxic to humans due to ciguatera poisoning.

Jacks may be difficult (not to mention exhausting) to catch but that is what makes it a great sportfish.

If you have fishing tips and strategies that worked for you, share them in the comments below and share this guide if you liked it.