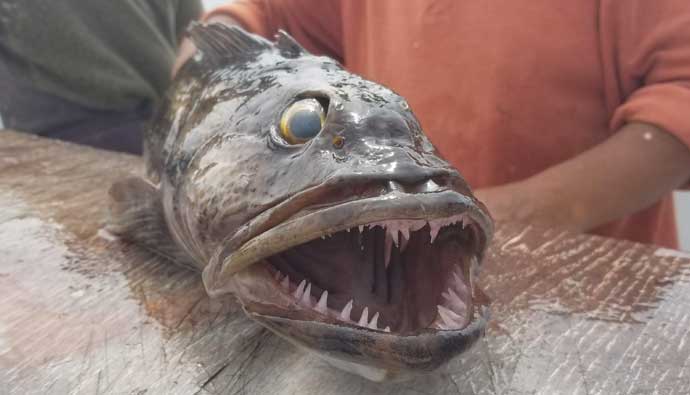 Lingcods look like a fish from your nightmares. They have fangs for teeth and weird bluish meat color.

However, they can be challenging to hook up and land, but if you do, they provide great table fare.

In this guide, you’ll learn everything you need to bring home a keeper lingcod!

Lingcod is known as the cultus cod, blue cod, buffalo cod, green cod, and the ling fish. This fish is a Pacific marine species that belongs to the Hexagrammidae family. Contrary to what its name implies, it is not a true cod.

It is also known as the cultus cod or false cod because of this and it can be found on the west coast of North America and off the coast of British Colombia.

The body of the lingcod is smooth and it has a long dorsal fin that runs along its body. It has a large mouth and pectoral fins and the adults are distinguishable due to their massive jaws and pointed teeth.

This highly prized sport fish can grow up to 50 inches or longer but they do not grow more than 3 feet in length. Females are larger than males and juvenile or baby lingcod have smaller and more slender bodies.

The ling cod is usually brown or grey and some blotches that have blue or orange outlines. The color of the outline depends on the habitat. Since it is a prized sport fish, the ling is has a history of being overfished.

How to Fish for Lingcod

There are a number of tackle rigs that you can use to catch this legendary sport fish. Let’s cover a few that have shown a success.

One of the best rigs for catching ling cod is the Norwegian cod jig.

If you can take this jig down to around 100-200 feet deep, you’ll be surprised how effective it handles hooking up with ling cods.

It’s a massive 12 inches in length and has large treble hooks. What’s great about such jigs is that they look like wounded herring and also the light glinting off the metal attracts the fish from the deep as well. Plus, since these jigs are quite heavy, they plummet to the bottom fast and can remain there vertically even if your boat is on the move.

These are also great because even in current they tend to remain vertical when hanging from the boat.

Shiny silver or metallic jigs are more attractive to lingcod than other varieties because of the reflective surface. Once the fish is hooked, you need to pull hard to get it out of its rocky hiding hole. You can also use large plastic grubs or swimbaits but only if you are fishing from the shore – these can get dislodged in deepwater currents.

Lings are not particularly migratory and they are available throughout the year in all four seasons but you can only catch one per day as per regulations. However, the best time to fish for lingcod is when it is spawning. Lingcod occupies rocky areas at depths of over 32 to 328 feet.

In October, the fish migrates to spawning grounds where the males set up nests in areas that experience strong currents. Spawning takes place in late winter and early spring and the larger females leave the nest sites as soon as they are done depositing their eggs.

Spearfishing for lingcod can be challenging as most of the time they are held up between the rocks. When diving makes sure you use a flopper so that you don’t damage your slip tip when you pierce through the fish and hit the rocks.

Since you’ll be looking in holes, make sure you bring a trusted diving flashlight to help you see where the lings are hiding. Even if you’re diving during the day, it’s helpful to bring one along.

If your speargun is making it too easy, try using a pole spear. I tend to like using them more around rocks since you don’t need much power to penetrate the fish and you can take more shots quicker if you miss.

How to Clean Lingcod Fish

I’m a huge fan of what Taku is doing over at Outdoor Chef Life. Check out his impressive ling cod catch and cook vid!

How to Cook Ling Fish

A: Lingcod meat is firm and it has a distinct green or blue color depending on its diet.

Q: Where do lingcod live?

Q: What do lingcod have blue meat?

A: The cause of the rare blue color is due to a pigment called biliverdin, which transforms the blood serum of this fish to rare color.